I’m going to lead with a graphic on this one. 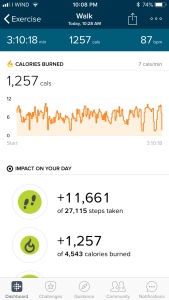 So that’s what walking through Ostia Antica looks like. The place is beautiful and just plain massive, more than earning its 12€ price tag just though sheer size. Dating back to the 4th century BC, Ostia was Rome’s seaport, though thousands of years now sees it three kilometres from the sea. It has several well preserved frescoes, some huge black-and-white museums, a theatre, and an impressive sculpture museum within its huge, huge, hot, unshaded grounds.

Today was just boiling, and wile the views from within Ostia were beautiful enough to distract you from it and get you to push your way through, there was just so much sweat and, like I said, limited shade. And wandering around the site itself earned the daily step count. That said, it’s completely unlike any Roman site I’ve seen before, both in scale and style, and makes a worthy trip.

If you’re in Rome proper, it’s pretty easy to get there, taking a suburban train from Piramide station and then walking about ten minutes to the gate. I had the benefit of being in Fiumicino, which meant figuring out how to get the local bus (B&B was helpful) to Ostia Nord and then taking the train a stop further. Totally worth it and could have called it a day from there.

Of course, for those of you who know me well enough through the blog or personally, you probably know that didn’t happen.

I decided to take one last shot at Rome, as I had a gift to pick up and wanted to get some more Giolitti gelato (though, admittedly, I wouldn’t have taken an hour train ride just for that). The train from Ostia to Rome had no air conditioning (the one I took later in the day did, so this one must have just been broken), and it made the Cairo Metro feel cool by comparison. Still, got off at Flamino, wandered through Piazza di Popolo one more time, picked up what I needed, got my gelato and managed to stumble into a relatively uncrowned Pantheon (which had a too-massive line when Daina and I were here before) and a church I had never been in before, Chiesa di Sant’Ignatio di Loyola.

Built in 1626, the church has a beautifully painted ceiling and, as I learned later, a “fake” dome, a fresco that gives the illusion of a domed top. Not only was it gorgeous to look at, but I had also been thinking about what I hadn’t seen in Rome and, there you go, something new and beautiful.

Back on transit to Ostia Lido Centro to get a Darsena-bound bus to the B&B. Finished off the Euros on grocery store pizza, a haircut and beard trip from an actual Italian barber at a place Carlito’s, before heading back to the beach for one last dip in the ocean at sunset.

Tomorrow, the LONG flight back to Canada looms, and the tourism stops for a bit as I MC a wedding. I’ll cover whatever I can from that, to be sure, as it should be a fun one! Once again, will miss Rome and Italy. The barber seemed a bit surprised that I had been to Rome four times, and I wouldn’t be surprised if there was a fifth.