Shameless cat picture, but had breakfast with this little fella!

That was the cutest, non-blurriest picture I could get, but trust me, adorable.

Anyway, with an 8 am Bus and a border crossing, today is a TRANSIT DAY, though a big one for sights as well. Bus to Mostar, an Arriva Bus, was definitely comfortable enough, took around… The border was interesting, as a policeman came avoided, took everybody’s passports, then gave them back to the bus driver, who took the pile to border agent, who was in a little hut, who then stamped all our passports. Didn’t seem quite legit, but here I am, typing away in Mostar, so I guess it had to be.

I decided to give the hostel thing a break and do a room via AirBnB this time, and the owner let me know that, if I wanted, they could do a tour of the sights closest to Mostar for a pretty reasonable price (40 Euros, a little less than a taxi, slightly more than a group tour), and not knowing when I’d be leaving the next day, I figured that would be a smart idea. So her dad, an Alman Brothers loving agnostic Muslim with a finely coiffed moustache and some awesome hair, picked me up at the bus station and, after grabbing my ticket for Kotor tomorrow (which was a process in and of itself – note that the Mostar bus station doesn’t take Euros, or credit cards, or suggestions to employ more than one person at a time, no mater how long the line) we were off and driving.

So I’ve said I’m playing this part of the trip a bit more by ear than Egypt, and of the sights Majla (my AirBnB hostess) named, I knew one of them was a waterfall, two of them were Ottoman related, and that was it. So, here’s some pictures and info that I found out after the fact.

So I’m not even going to worry about the history here, it was waterfalls, they were beautiful, you could swim in the large lake at the bottom of them and the place was surrounded by affordable, simple restaurants and bars, where I finally had a decent bite to eat today, a cheeseburger and Lasko beer for $4.5 Euros, which would have cost me way more in Dubrovnik. The water is cold and crisp and you can climb all over the waterfalls if you want. Great first stop!

It started out as a Hungarian stronghold in the 15th century but soon became an Ottoman one as they moved through the neighbourhood, building mosques, hammams and a madrasa, which can still be seen today amongst the grey stone houses and buildings. 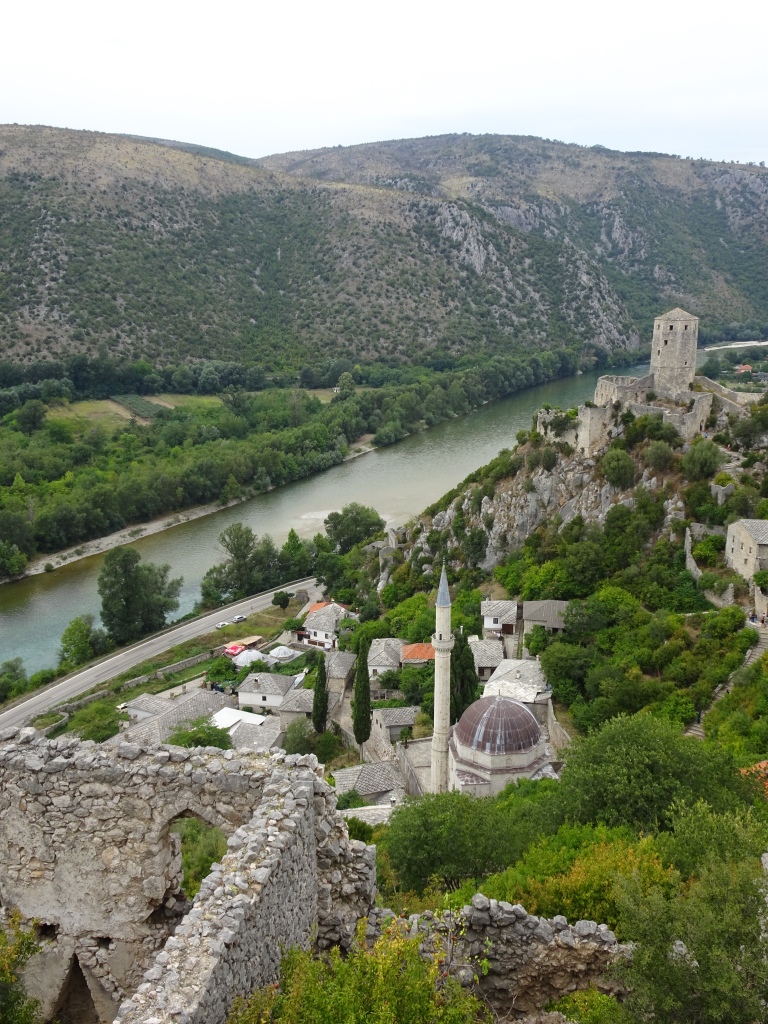 There is a fortified tower you can climb on one side and a bastion on the other, both of which give fantastic views of the site and the surroundings, and it’s free!

Home to the Blagaj Tekija, build in 1520, a Dervish monastery built by the Ottomans. It’s considered an important site for Sufi Islam, and kind of looks like if Turkey’s Sumela Monastery and Sanfranbolou had a kid, who didn’t quite live up to expectation, but was still fine and loved by both parents. There’s a sacred cave next to the monastery that you can take a boat ride into and a spring that feeds the local river.

So of the people who come to see the bridge, it seems most are coming via a day trip from Dubrovnik. I made it in around 6:30 pm, when it was still lively, but manageable. The chief draw is the Mostar Bridge, rebuilt since the Bosnian War in the 90s. You can get several great views of it from around town, including a paid one from the nearby Koski Mehmet Pasha Mosque, some from along the river, a fantastic one if you make it down to the water’s edge, and a good one from a more nearby, modern bridge. The town is also dotted with some simple mosques, historic Ottoman houses, and plenty of good, cheap eats – I had some ćevapi, small lamb and beef sausages served with onions and bread for 7 KM, about $5.50 Canadian, and it was pretty substantial. Sure you could get it even cheaper if you were further off the tourist stretch.

Back at the AirBnB, I met three Hungarian kids who chatted me up about the region, Egypt, Canada and good party spots in town. My current party spot is my bed, which I will be sleeping in soon.

Just based on today, Bosnia has earned a spot on the “Return List” at some point in the future. The stuff I’ve seen today has been beautiful, and I’m sure it’s just a sampling.

Tomorrow, seven hours on a bus. Might be a jogging morning, we shall see.