Sure, the driving isn’t, and it can be pretty dirty, and you’re going to be party, like it or not, to the time-honoured tradition of being welcomed by all and bartered with by many, but it’s safe.

I’m getting that out of the way now because that was the big concern from everybody (and, I will admit, myself) before deciding to come here. The concern that made me hesitate, not book a direct flight, research the heck out of the situation. The concern that, frankly, is costing the country, and it’s people.

That is an unbelievable shame.

This is a dream destination that more than lives up to, and often time exceeds your expectations. The “Heavyweights” of the Pyramids, Luxor, Abu Simbel are impressive in spite of their cultural saturation. Look deeper, you have the streets of Islamic Cairo, beautiful Coptic churches and monasteries, lesser-known temples like Abydos and Dendera and, of course, sailing the Nile. Take the heavyweights away, and the second tier would still be worth a visit.

I recognize how blessed we were to have taken this trip, and already I feel the country calling back to me. With the Grand Egyptian Museum opening soon, more tombs in Luxor being restored, and sights we couldn’t get to like Sharm el-Sheik, the White Dessert, and the Siwa Oasis, this wont be the last time in Egypt.

These are some short bits from the trip that I forgot when I was writing the first time, or some extra reflections that came to me later.

*is not a travel agency.

After failing to buy train tickets at Giza Station, I managed to (relatively easily) buy two tickets off of the Watania Sleeper Train website. Catch was, we had to print them. Our guest house didn’t have a printer, the Internet cafe I googled didn’t exist anymore, so we spent most of the first part of the night looking for anywhere with a working printer, from a different hotel, to a cafe they directed us to, to a mobile shop. As we were making the loop, we noticed a storefront called “Building Travel”, which we thought was a travel agency. So we thought they might do us a solid.

We went inside, and it seemed to be a relief/work agency that helps people build houses in developing countries. Think a Habitat for Humanity or Me to We. We still asked and were directed to a guy at the back with a computer. He was a bit hesitant at first, telling us that the printer was “broken”, and when I said “the light is flashing, are you sure”, he said it was “for work.” Daina laid on some charm and we managed to break through, so sure enough, we had our sleeper train tickets printed. I then used Google Translate to explain that we thought they were an agency, which brought a smile to his face, though I think he was still a little confused. Still, glad we could get the help!

So every once in a while, there’s a story and image that you come across on your trip that’s the perfect combination of everything. This was that story.

In the Speos of Horemheb, there is a gallery where all the gods are looking to Horemheb and thanking him for bringing them back to Egypt (after Akhenaten instituted his one-god religion). One of the gods is a one-armed man with an erection who is the Egyptian God of Sex, Min.

So, story behind this guy is that a village was about to fight a war, and all able-bodied men were called upon to join. Having only one arm, Min told everybody he couldn’t fight and stayed behind. Eight months later, when the men of the village returned, every woman in the village was pregnant, and soon after, Min was dead.

Flash forward a few years, and all the boys of the village were noticing that they were all the same age, had the same face, and couldn’t quite figure out why. So they asked their mothers, who explained that Min was their father and, after that, deification.

I personally have never had this experience, but I feel I have friends who could relate.

So, for starters, please notice the three holes punched into this ticket, and the awkward rip in the top corner. 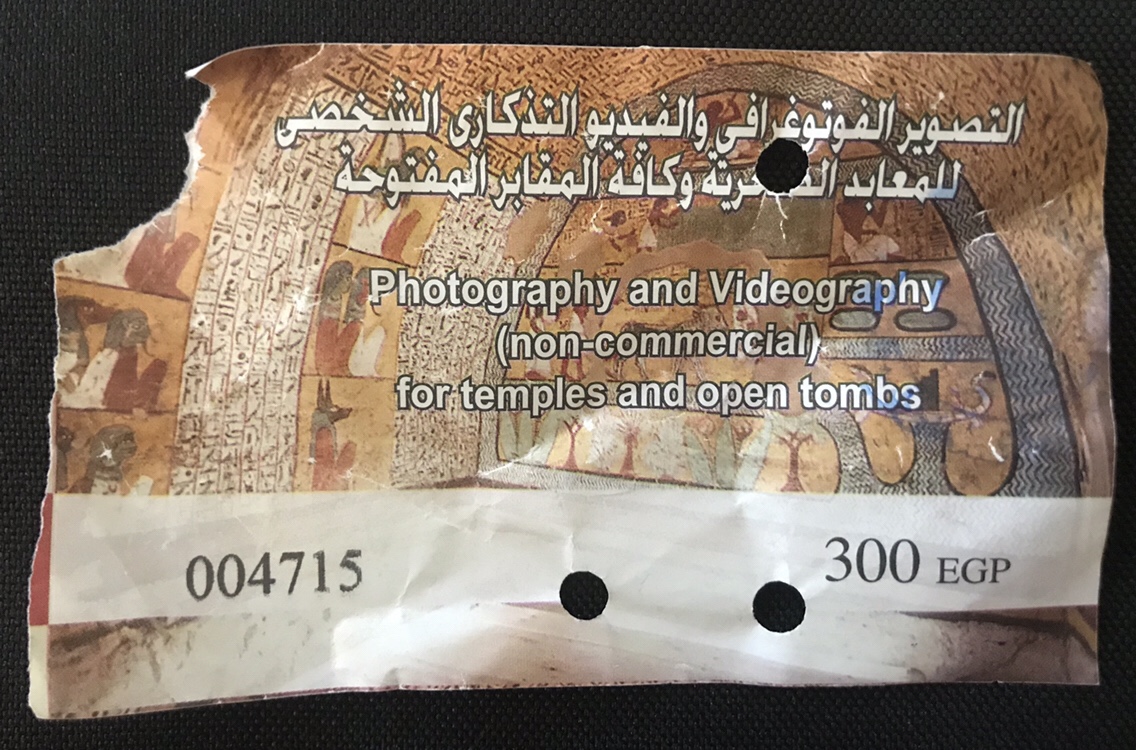 That’s me almost getting busted for taking an extra picture. Twice.

The first time was a half-remembered mistake in King Tut’s tomb, where apparently you can’t take pictures. No writing on the tickets, and the “No Photo” signs around the place had been ignored earlier if you had paid for the photo ticket, so I figured “What’s the worst that could happen”, kinda-sorta knowing the answer was “they take your camera and you pay a fine”.

So when the guy in the tomb came up to me, I pleaded ignorance and, when he asked me to give him my camera, with my wrist wrapped around the strap tightly, I opened up the pictures, and immediately showed him I deleted the (not that great) photo. That, plus a lot of apologizing, seemed to convince him.

So that was camera issue one. Camera issue two came in the tomb of Ramses VI, where my ticket was stamped a third time and the guy at the top said “photo finished”, meaning that was it for photos. Now, at this point, I was actually a bit frustrated, as this was indicated nowhere on the tickets or at the front. I had one tomb to go and I wanted to make the most of it. Still, I didn’t want to get in trouble.

So I go into the next tomb, Ramses III, and hand the guy with the hole puncher both my regular ticket and the photo ticket, thinking he’ll tell me “no” if the fourth tomb is done, and that would be that. He stamped both, and I went on my way.

Now, as I went down, there were some German tourists, one who was getting sour with me, asking why I was allowed to take photos. I told her I bought the special ticket, and she scoffed, as if such a thing couldn’t exist if she hadn’t heard of if. This led to her friend attempting to take a photo, which she was stopped from, by a guard who then wanted to use my ticket (which was in hand) as a way to show her what she needed in order to take photos.

My ticket, which he slowly realized, while counting, had four holes.

So there was a bit of a commotion and me saying (truthfully) that the man at the top had punched it, and then more apologizing, then a second guard joining in, giving me a calming “You can be quiet”, while also letting me know that more pictures would be fine if I gave the other guard some baksheesh. I gave him the small bills in my pocket, he carefully ripped the corner of the ticket (which his friend seemed to think was excessive) and I was allowed to take more pictures, of which I think I took two.

So, Valley of the Kings tip – know the photo rules ahead of time, and know that they’ll bust you if you try to break them. Also, the same “let me open this secret door” mentality that exists in some temples seems to exist here. That’s how I got a good picture in the Merenpetah tomb, guard climbed under a gate to show me I could before offering the opportunity to me, for something extra.

I’m not advocating it, in fact I’d actually advocate against it because I wouldn’t want anybody losing their gear, but there it is.

So Alladin, right near our guest house on Luxor’s West Bank, is absolutely lovely, with a Nile view, comfortable seats and really good fish. Like, I got two Nile perch for 100 LE and that included rice, soup, veggies… all the good stuff. 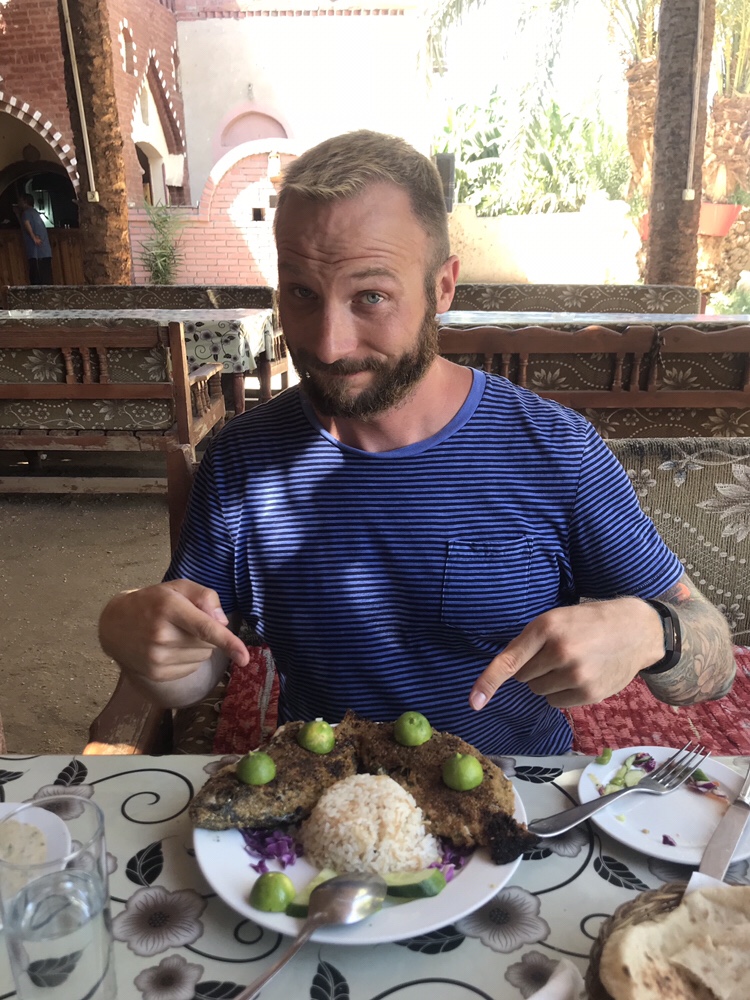 And the guy running the place was wonderful, engaging us in the discussion I mentioned earlier, extolling Canada’s virtues when compared to the US.

Now, a few times this trip, we had discussed whether or not crocodiles still lived in the Nile, and the short answer is no, not since Nasser built the dam. So when our host asked if we wanted to see a crocodile, we were a bit surprised.

He leads us to an enclosure with a crocodile laying in it, alive, but doing its “not moving” crocodile thing, and our host even offers to poke it with a stick to show it’s alive, which we, as polite Canadians, decline.

I look to my right, and there is another enclosure, and our host asks us if we want to see a wolf.

In a similar sized pen (and we’re talking no bigger than a Toronto condominium bedroom here) are two “wolves”, which look kind of like jackals or desert foxes or whatever you’d call them. Our host proudly states “We went to the desert and caught them!” One is lying around tired and the other looks very uncomfortable, with signs of mange on its back and it’s tail slightly between its legs. Daina points this out, and the owner notes “yes, we need to get it a shot”, in a tone that sounded a bit like “oh, you noticed that.” We made a couple more suggestions that he really didn’t look well, just to drive the point home, before leaving for a walk on the Nile.

Was totally going to recommend the place for its food, but the “wolf” thing changes that story.

So going to put this out there – I think the West Bank of Luxor might be nicer than the East Bank, in that it’s more secluded, quieter, and away from the craziness. That said, if you’re a DIY traveler who enjoys doin things like using local transport or negotiating with cabs, it might not be your best option, depending on how secluded you get.

There is a developed area of the West Bank (I think it’s actually called the Tourist Zone), closer to the ferry and probably with a few more cabs around, but if you’re in the more rural parts near Banana Island, you’re mostly relying on your guesthouse unless you want to go really far afield for the bartering process.

Again, not an indictment, just something to think about when booking.

I’ve touched on this a few times during the trip, but the annoyance is as pervasive as the problem, so here it goes again.

This country, which pretty much openly operates on the idea of providing tips for every service, makes it almost impossible to tip at certain times, particularly when you get to tourist sites.

Bank machines give pretty much only 200s and 100s, 50s if you’re lucky, and usually just one, and that’s if you type 50 into the amount. Even that denomination can lead to a change scramble, as shopkeepers disappear for a few minutes with your bills, or a ticket vendor writes and IOU on your stub. It’s frustrating, especially when you end up in a near standoff when buying tickets, where you are treated like the problem for not having anything small, because you’ve either given it all away to various people, or the last ticket office didn’t have change, and you had to give it away there.

And considering the general small-change shortage, I wonder if the ticket sellers are actually hoarding small change for themselves because they need it in their everyday life, and bringing a 100 from home to swap out for small bills at work doesn’t seem like that bad of an idea.

Anyway, it’s a problem, and one I hope the government tries to solve, because it’s really hurting people on the ground in the industry.