With Abu Simbel tomorrow and our river cruise the day after, we had to try to get as much into our Aswan experience as possible. So today was all about getting in a car and driving around to some of Aswan’s best sights, starting with the Dams at Lake Nasser.

The Aswan Dam was the first we were able to check out, though it was more of a drive-over. This dam was built at the turn of the 20th century to help irrigate the fields of farmers, but it had difficulty actually controlling the flow of the Nile to help avoid floods and provide enough regular water, so in the 1940s, the Aswan High Dam was planned, and it has since doubled the country’s power output and increased farmable land by a third, though it has led to some issues with salinity in the water, increased parasites. When you’re standing on the middle of it, you’re standing on enough materials to make 18 Great Pyramids, and you get a great view of Lake Nasser and our next site, Kalbasha Temple.

With all the water moving, a few historic temples were at risk of going under the water as well. In the case of Kalabsha 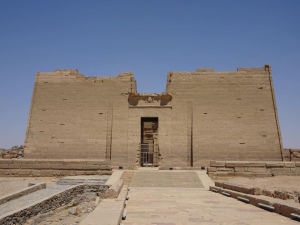 (and the smaller Beit al-Wali and Temple of Kertassi), a team of Germans helped the Egyptians relocate the temple. It’s a Ptolemaic Era temple (around the time of Jesus’ birth) and was dedicated to the Nubian solar god, Merwel (who the Greeks called Mandulis).

To get to the temple, you have to take a ferry boat, and this may be the one time where the tourist downturn in Egypt hasn’t worked in our favour. See, to get to this temple (and later, Philae), you have to hire a boat. The whole boat. The cost of the boat is fixed, so if you have ten people, the boat is 200 LE, if you have two people, the boat is 200 LE. With just the two of us there, that’s what we got, with little room for negotiation (and we were told ahead of time by the hotel that this is what we should expect). So we got our boat, which dropped us off at the ruins for an hour.

The temple was small, but beautiful, and the caretakers were eager to show us around. Usually, I’d ask them to leave us alone, but they seemed extra eager to help, so we let them show us a few hieroglyphics, give us roof access, and gave them some baksheesh at the end of it for their troubles. The carvings on the inside of the temple were gorgeous, and the nearby Beit al-Wali temple had several fine carvings that had retained their original colour, depicting Ramses II defeating the Nubians.

An hour was enough, though Daina was enraptured by all of the different carvings and probably could easily have spend another half-hour there on his own.

After getting back on the boat and back in our car, there was a slight sense of rinse-lather-repeat as we went to one of Egypt’s more famous temples, Philae temple. I had readied myself for Philae ahead of time, having read that the ferry negotiation was intense, the guards and caretakers would aggressively follow you or try to photobomb your shots for tips, and that there was quite a bit of hassle at the temple.

Well, ferry price came in at cheaper than Kalbasha, guards were nice and asked us where we were from before leaving us alone, caretakers asked if we wanted to take pictures of them, but nothing nearly as intense as what I had heard. Maybe the lighter load of tourists has driven people elsewhere, or they’re appreciating that we’re appreciating the quiet, but we were mostly alone at Philae. And it was breathtaking.

Philae is dedicated to Isis. The exterior is surrounded by gigantic hieroglyphs and the inside has some intricate carvings. Massive columns hold the structure up, surrounding the inner temple halls. Approaching it by ferry is serene, there were ridiculously few amounts of people. Kalbasha was more of a boutique hotel, but this was the Ritz of temples. 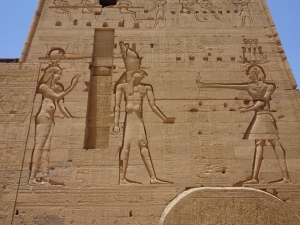 It’s been used since Egyptian times, with some Roman additions, and a few crosses carved into walls due to its time as a church. The scale is the biggest of the temples we’ve seen so far (barring the pyramids, of course), and like Kalbasha, this one was also moved to keep it from being flooded by Lake Nasser and the High Dam. I can’t see how one wouldn’t want to take this in when they’re in Aswan, so please do.

Last stop along the way was an interesting, if less awesome one, the Unfinished Obelisk, an obelisk that was left in the ground, unfinished (makes sense) that would have been the heaviest one in all of Egypt. It was a quick stop, with the option to add seven minutes to it with a video presentation, which I discovered was on YouTube and didn’t look that exciting. Daina did pick up some bracelets from a vendor, though, so that was fun.

We got back to our hotel, tipped the driver (a wonderful man named Shinouda), and then wandered to a sandwich grill Daina discovered on a walkabout last night to pick up some grilled chicken subs for 20 LE a piece. Daina crashed out in the room due to a bit too much sun, but I was still feeling it, so I decided to take in the Nubian Museum.

Now, ironically enough, the sun had given Daina a bit of a migraine, which he usually cures in a cool, dimly lit room. Well, the Nubian museum was pretty much all cool, dimly lit rooms, granted, with a 20 minute walk through 40 degree Aswan heat. It gives a fascinating history of the interplay between Nubia and Egypt, features many items from both societies, from the ancient to the Christian to the Islamic eras, has a model Nubian house, a cave with Nubian drawings that were also rescued from the High Dam floods, and a garden to walk through on the outside, right next to some local houses which were cordoned off by an iron gate, where quite the party seemed to be happening. The museum actually had a line, though that was mostly because the guy selling tickets had disappeared somewhere, and I arrived at the exact time as a lady and her guide, three people from Texas, and a Spanish family of five. It was the kind of crowd I wasn’t used to today. Along the way back, the sun was setting on the Nile, providing a picture-perfect close to the day’s adventures.

We’re keeping it local for dinner tonight, maybe the hotel restaurant, as we have a big, early day tomorrow. We’ve seen two temples that were saved by floods today. Tomorrow, we see the biggest.