So I’ve been blessed enough to travel large swaths of the world, seeing amazing sights ranging from the famous to the completely obscure.  Travel has become so much a part of me that, if I don’t get to a new country every year, it feels… off.  Which is not a bad problem to have, let me tell you.

For those who are just stumbling upon this blog and don’t know much about me, I’ve been able to check out nearly 70 countries through a combination of work and vacation.  As a teacher, I have the opportunity to travel each summer and have worked as far away as Kenya and Seoul.  I’m a Toronto native, meaning I come from what many consider to be the most multicultural metropolitan city in the world.  I don’t know who gets to decide if a person is “worldly” or not, but I’d hope I would qualify.  Yet, one place I haven’t explored nearly enough is the giant backyard that is Canada.

Recently, I saw a map online that labeled each country by its top tourist attraction, and sprawled across Canada were the two words “Niagara Falls”.  I had gone once in university for a casino trip, on a day that ended up dark and rainy, and by the time we got to the Falls, they were darkened by night, rain, mist, and a blur of food and drink from earlier in the day.  In other words, never got to see them in all their glory.

Having just turned 40, figured it was time to check that off of the bucket list.

Now, fortunately, and we’ll get to that later, we managed to fit more into our day than just the Falls.  Renting a car from Toronto, Daina (my partner-in-crime for most of my best travel adventures) and I figured we’d make some stops along the way, starting with a little retail therapy at Niagara Outlets, where I discovered that “Men’s Large” is the unicorn of outlet sizes, while small and XXL are the pigeons. We drove on to Niagara-on-the-Lake, stopping at the Pie Plate Bakery & Cafe for some amazing seasonal pizza, seasonal in that it had strawberries on it, since the Niagara region was in the midst of its Strawberry Festival. Quick wander through the town, filled with curio shops, the clinking of Niagara’s various wines on patios, almost as much gelato per square meter as you’d find in Italy, and a beautiful lakeside strolling area.

Then, Niagara hit us. Visually.

The approach to the city features one of the biggest, nastiest looking casinos I’ve ever seen, attached to the indoor water part. Kind of a short, squared-off CN Tower looking thing, which just juts out at you. As you drive into the city, you see the chain restaurants, including those you see at almost every global tourist trap (Rainforest Cafe, Hard Rock Cafe), and any tranquility you may have felt from Niagara-on-the-Lake is quickly stripped away. It’s like Vegas and Bangkok had a baby and couldn ‘t decide on custody so they just kind of left it along to raise itself. Basically, it’s a bit of a mess.

Still, we didn’t come to Niagara Falls for the (multiple) was museums, the dinosaur golf, the new (but really disappointing looking Go-Kart Track), we came to see the Falls. In that, it definitely did not disappoint.

We stayed a bit further away from the Fallsview area, at the Vittoria Hotel (which was nice, clean, comfortable), so we had to wander through the chaos of Clifton Hill, with its haunted houses and even more wax museums and zombie-apocalypse-6D-movie-arcades (though, admittedly, the arcades looked like fun) before you get to the actual Falls themselves. You look over to the American side, which features a giant walkway dotted by little rain ponchos wandering through the mist and observation walkways, and you’re struck by how orderly our Canadian side is. Busy, for sure, but when you’re actually close to the water, it seems almost under-developed. Maybe we have some kind of National Park law here that doesn’t apply to our friends over the border, but whatever it is, the crowd didn’t seem so crowded, which made it a nice experience.

And the falls themselves were spectacular. The American Falls (actual name), which are on their side of the border, are impressive enough, featuring a sheer drop into the rocks below, but I think we definitely got the prettier falls with Horseshoe Falls on our side of the border. 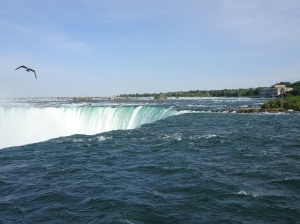 The mist builds up a bit more, making it a bit harder to see the water, but once you get to the edge, you see a horseshoe-shaped drop into oblivion. Definitely makes the stroll all the way to the end worth it.

40 is going to be a year of a lot of interesting things, maybe coincidentally occurring with the change of age, but also happening because it feels like the time is right. Maybe we consider this trip a bit of tourist housekeeping, a chance to see something new that should have been something old. Either way, you can put a “check” in the box next to “Seen Niagara Falls”, and now it’s on to bigger and better boxes.