So much done today, starting with the famous Western Brook Pond. 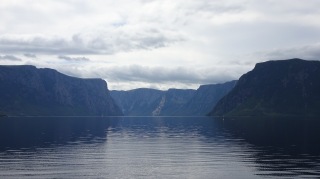 A three kilometer hike off of the highway, fifteen minutes south of Cow Head, is a massive pond that used to be a fjord before the sea levels changed and the fjord shifted from salt to fresh water.  It’s only accessible by foot, and the boats they use to tour you around the pond were brought across in ways ranging from sleds to helicopters.  If you’re coming to Gros Morne National Park, this is the trip that you’re most likely to do.  It was also the trip that Jeff and Emilee weren’t booked on and almost missed.
After completing the hike, our friends went up the desk to see if there was a shot that they could get on, with all of us already having noticed the “Reservations Required” signage leading up to the trail.  Fortunately, a even though the boat was sold out, there were a couple of no-shows, which allowed for Jeff and Emilee to get on board and enjoy a fantastic ride.
The tour of the pond takes about two hours, is narrated by a local guide, and ends with local music.  You learn the history of the pond, from when it was covered with glaciers, to various rockslides, to how slowly it changed over.  You learn that the pond’s water is so pure that it actually has trouble sustaining life (no nutrients), and get to see rocks taller than the CN Tower.  We even got lucky enough to see a moose grazing on the trees!  Beautiful round trip, definitely recommend it! 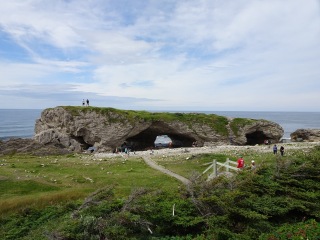 We drove up the road past Parson’s Pond, where a local baseball game was playing, and you could actually see cliffs covered in sand rather than rock, before making our way up to Arches National Park, which featured a pair of arches that had been washed away by the sea, with a grassy top you could actually climb up to if you’re a decently confident and healthy climber.  We kept up the road to Anchor Point, which was the oldest English settlement on the Viking Trail (the rest were French), and while the town wasn’t super exciting, it did have a beautiful church on a hill and some views of the ocean.  You’re also able to see the other half of Newfoundland and Labrador from the shore – a ferry ride we couldn’t fit in this time.
We kept heading past a few spots we’re going to check out tomorrow as I checked my Iceberg  Finder to see one about a twenty minutes drive of our final stop.  We hit the small town of Saint Lunaire-Griquet to see an iceberg the size of a sailboat floating in the water, closer than anything we’d ever seen this trip.  Finally, a drive to Saint Anthony, where we were greeted by more humpback whales, these ones mere meters from shore, as we went to have dinner at the amazing Lightkeeper’s Restaurant, right near the Fishing Point lighthouse.  And right in time to catch the sunset.

If this post doesn’t seem as in-depth as others, it’s mostly due to fatigue, some computer issues, and the time of night.  For a day that was mostly spent in a car, though, it was a spectacular one!