You can always count on your brothers to keep you busy.

Yes, the wedding is tonight and, no, I won’t be doing any kind of writing about the festivities today when I get back.  At best, there will be some Newfoundland-specific bullet points at the start of the next post.  Today is going to feature the activity I was able to squeeze in before the wedding, thanks to a few brothers from my fraternity.

Late last night, I get a text message from Jeff Alpaugh, who is the Jeff Alpaugh behind Jeff Alpaugh Customs, which is “Home to the World’s Most Dangerous Dress Shirts”.  To say Jeff is a character is an understatement, and those of you living in Canada will get to see how much of a character sometime this fall as he pitches his dress shirt company to the Dragons on CBC’s Dragon’s Den, which was Kevin O’Leary’s original “Let’s Make a Deal” show before setting up in the Shark Tank.  Jeff is a military guy and to know him is to know he loves making a good plan and following through on a good challenge.  He had decided that, in spite of having some drinks with our buddies Johnson and Danno (as well as his wife Emilee), everybody would get up in the morning to do a hike.  I was hesitant, wanting to write down my MC notes for the wedding, but that anxiousness, plus the beers I had the night before, actually served to wake me up in time for the hike and, after writing down my notes at the WAY better than expected breakfast at Corner Brook’s Quality Inn, we were off hiking. 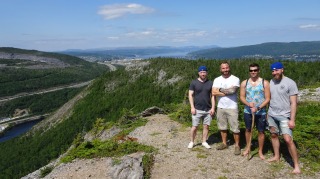 Man in the Mountain is supposed to a mildy challenging, but not too long, trail near Corner Brook, and it definitely met the first criteria.  We drove up to the trail head and found out Danno had made a bad fashion choice and worn suede shoes with no real treads on them for what he thought was going to be an easier hike.  Deciding it was better to wreck his feet than his shoes, he was soon barefoot, and Jeff joined him in solidarity moments later.  We made our way towards the top, stopping at views of ponds and Corner Brook below, before reaching the top, which gave us excellent views of the surrounding areas.  The trail was marked by blue plastic ribbons, and Jeff and I decided we’d move forward to see if it looped back down to the bottom.  It was a mission we weren’t really able to complete as, about 30 minutes in, it looked like it may loop, but we didn’t have any sort of definitive answer on that, and considering we had to get back to the hotel and get ready for the wedding, we ended up doing a couple of hours hiking, getting in the best of the views, but not actually completing the trail.  Can’t win them all.

Tomorrow, we’re on the road again, with a LATE start.  Post-Newfoundland wedding, after all.