One of the great things about having a vehicle is, on occasion, you have the ability to say “we will save that one for tomorrow”.  It doesn’t always work, especially when you have accommodation set, but for today and tomorrow, that mantra works just fine.

We slept in to a reasonable hour this morning as Daina’s head was more than a bit sunburned from the whale adventure yesterday, and we were a bit later getting back from the Yellowbelly Brewery than we thought.  Drove out of the Hometel on Signal Hill and, after a quick stop at a pharmacy for antacid, we made our way to our hotel’s namesake, Signal Hill. 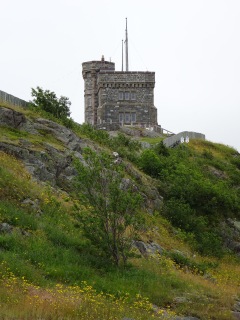 Long named for signalmen using flags to communicate news about approaching ships, and fought over by the French and English for it’s brilliant location atop the cliffs at the mouth of St. John’s natural harbour, Signal Hill’s biggest “Heritage Moment” undoubtedly came in 1901 when Marconi received the first ever transatlantic wireless signal.  It cuts a beautiful view over the harbour, and there are little trails that take you from the lower parking lot up to the tower, and other towers that take you to the rocks below.  You can climb to the top of the tower for the highest views of the land, but I’d argue the walks around provide some better vistas.  Maybe the most ironic part of the day was the kid “running” the exhibit on wireless transmissions today mostly ignoring tourists while he read messages on his iPhone.  Marconi didn’t know what he was getting us all into. 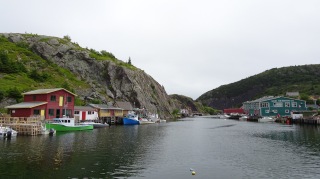 After the hill, we drove on down to Quidi Vidi, a small harbour just next to St. John’s and home to St. John’s most famous brewery, the Quidi Vidi brewery.  Beautiful little harbour that is walkable from downtown St. John’s (we didn’t have the time to make the stroll) and has a quaint craft centre on the edge of the harbour.  You can do a tour of the brewery as well, but it makes for a nice photo op even if you don’t go much deeper than that.

After Quidi Vidi, we started our drive up to Bonavista, where we would be spending the night.  Along the way, we decided we’d stop in at Trinity and the Fort Point lighthouse.  The lighthouse was supposed to be supervised and cost $5 to get in to, but nobody seemed to be on duty, and I’m wondering if they kept the staff at home to compliment the whole free entry happening at historical sites and parks for Canada 150 this year.  Fort Point served as protection for the harbour from 1762 to 1871, at which point it was re-purposed as a lighthouse station.  Across the bay is Trinity, which is full of historical 18th century buildings and cute little street signs written in calligraphy.
Funny things about cute little towns, though.  On a bright, blue day, they appear quaint and welcoming, especially in the middle of the day when everybody is walking around.  On a dark, grey day like today, and after most of the tourists have gone home, they can give off a bit of a creepy vibe.  Still, a nice walk and detour before we got to Bonavista.
Now, we thought today was going to be a puffin day, but the day was getting colder and darker, so we thought we’d leave it until tomorrow.  Instead, we hit up a great seafood restaurant called “The Skipper” in Bonavista and then made laundry plans.
Tomorrow, though, PUFFINS!!!