BIG day out on the island today, even with a generous sleep in.

With the plane delays, driving and almost-mix-up at the inn taking a bit of a toll, we didn’t wake up until a bit after 10 am today, which is on the late end for some of our vacations.  Breakfast was made by Chef Kirk, thanks to our grocery run at Vanessa’s yesterday, and then we were off to discover more of this beautiful island. 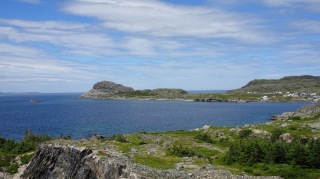 Fogo Island, being a giant island jutting into the Atlantic, has plenty of fantastic views and trails, so today was about hitting a couple of them.  First up was the Brimstone Head Trail.  Brimstone Head is considered one of the “Four Corners of the Flat Earth” by the Flat Earth Society (who actually has a museum in town, which we didn’t head to), and once you’ve made the hike up, you can understand why it was given that title.  You’re looking out at the ocean onto a couple of rocks, lots of blue, and then on the backwards view, you’re getting a wonderful view of the town of Fogo.  It’s a steep climb up, and it’s the place you’re most likely to feel “touristy”, but only because it had about ten people standing in one place at one time – a rarity for Fogo!  It won’t take more an hour to get to the top and back and is definitely recommended, though if you’re not a stairs or steepness person, it may be rough. 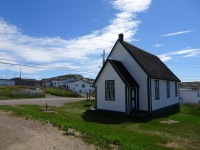 Once we climbed down, we did some walking around the town of Fogo, snapping shots of its old Anglican Church and its one-room Catholic schoolhouse.  Stopped for lunch at a restaurant called “Beaches”, which did not feature Bette Midler and B
arbara Hershey sobbing, but did feature some decent seafood, and even a smattering of “vegetables”, a broccoli-cauliflower-carrot mix, which are a bit of a rarity on Fogo, from what I’ve heard.  Then, it was off to hike two! 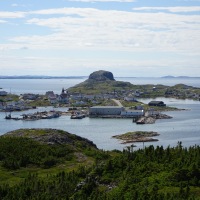 The Lion’s Den Cove trail head is located near the Marconi Wireless Interpretation, which tell you about the history of early wireless communication, and the station’s roll in some historic shipwrecks, including the Viking explosion, where a ship tried to flip an iceberg with an explosion for a movie, and receiving the second distress call from the Titanic.  It’s a cute stop, but the real draw is the trail, which takes you over some ponds, up top of rocks and hills, down to the Lion’s Den Cove, and around some stunning coastal scenery.  We got lucky and saw another caribou grazing, though this one didn’t appear to be tagged or domesticated.  It’s a long hike, but not too difficult of one. 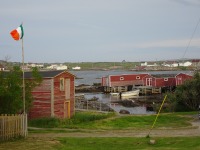 Once we were done there, we decided to reward ourselves with some ice cream from Fogo’s local ice cream establishment, Growlers, which had apparently had such a big day that half their ice cream was gone, causing the lady at the counter to use a not-so-nice work for the differently-abled to describe it.  Good ice cream, though.  A few more photos were taken near Joe Batt’s Arm, including some closer shots of the Fogo Inn.  Not too close, because the road leading to the Inn says you can only take it if you are a guest or working there.  We did a few more stops along the water before making it to Tilting, another small town on the island which was obviously proud of its Irish roots, as evidenced by the Irish flags far outnumbering any Canadian ones.  After that, back to the Cod Jiggler for more fish-and-no-veg before headed back for a rest.

I think we could easily spend a few more days here taking in the different trails, and if you’re looking for a hiker’s paradise, Fogo more than fits the bill.  Tomorrow, we’re back on the big island, making our way to St. John’s for what should be an amazing experience!  More to come later!