By no means fluent in Spanish, but at least know the word for “and”.

So Thursday and Friday are both “spoken for” in terms of big activities, so I wanted to get some of the local sightseeing done today in case I’m too tired out to do it the following days.  With Catalina and Andre back from the hospital, but Andre nursing a nice stingray wound, this morning’s practice ended up being a focus on back bends led by Catalina.  Good chance to refine some technique, work out a few kinks in my hips and shoulders, and get the morning moving.  It was followed by another meditation practice, which involved some partner work, checking in on your mindfulness by asking your partner “Where is your focus now?” over and over.  It sounds annoying, but it was actually very well led and done and allowed some nice insight as to how your brain processes information.

Another great breakfast including TWO cakes!  Breakfast cake needs to catch on as a thing.  I mean, I’ve done breakfast cake before after birthdays and other events, but there seems to be a social stigma attached to it and, really, that needs to disappear.  #breakfastcakerights 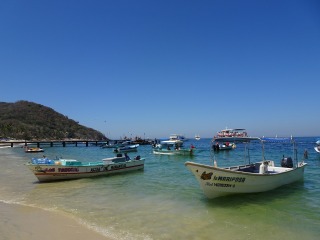 After loading up on food, a small group of us (Shelly, Wendy, Carla and Joanna) took a stroll down to the other closest town, Las Animas.  A hilly little path led us past a few big houses that may or may not be gearing up to be resorts, a couple of barking dogs, lots of horse poop, until we finally hit a beautiful beach.

That’s pretty much what Las Animas is.  A beach town.  We even asked one of the locals if there was another town up in the hills and he pretty much said “No, this is it.”  It’s a pretty strip of restaurants and appears to be a major stop on the package tour circuit, as a double decker party boat that I recognized from my Royal Caribbean days was in the process of docking and dumping tourists onto the beach.  We managed to avoid the crowd and hung around the more secluded area of the beach, nearer to the trail, and it was by far the best sand and water I’ve been in this trip.

The hike back was uneventful and we actually heard the lunch conch blow while we were strolling, so we went from deliciousness to physical activity to deliciousness, which is really what life should be all about!  Lunch was shrimp fajitas and Catalina managed to get a couple of locally made pies (spelled pays) ordered in Quimixto before the stingray incident, and there were delivered piping hot for lunch today! 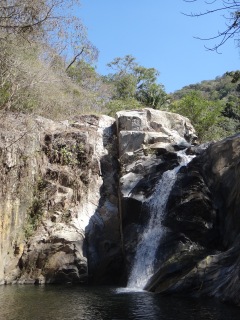 Not content to simply walk a thousand steps one way, I decided I’d also head in the other direction towards Quimixto and check out the Cascada Quimixto, or Quimixto’s Waterfall.  About as taxing a hike as the one to Las Animas, though with significantly more horse poop, as Quimixto’s tourist industry seems to be all about shuttling people to that particular waterfall.  I was lucky enough to get there when it was empty, though I didn’t jump in for a swim because a) I didn’t have a swim buddy and didn’t see anybody around and b) everything seemed a bit too “monetized” around the fall.  10 pesos to sit at a table, 15 pesos for a picture on the bridge, 5 pesos for the bathroom (which I get).  I think I came after a big wave of tourists, so I didn’t get hassled, but no waterfall swim for me.

I did get a chance to dip in the ocean near the Los Cocos beach bar, which is only about five minutes away from Xinalani, with comfortable beach chairs and a rock-free beach.  After all the wandering I did today, I indulged in one of the tastiest Corona’s I’ve ever had before heading back to Xinalani for a Yoga Nidra practice.

Now, I have never done a Yoga Nidra.  Spirit Loft offers one on Friday evening but, by that time, I’m usually too exhausted to go across the street and do yoga, or I’m trying to get past my exhaustion to get ready to go out somewhere.  After today, though…

Basically, you’re lying on your back for about an hour doing a guided meditation and it is AMAZING!!!  And yes, I recognize that all-caps amazing and multiple exclamation marks may not seem like the best way to describe what is actually a very zen and calming experience, but it’s my description, so I’m sticking with it.  Catalina’s guidance was amazing and made something that could have, in the wrong hands, context or mindset, not have been as effective.  At one point, we were in a field and we were asked to thank people who made this moment in our life possible as we left the field and I actually felt like it was an awards speech and I was nervous about forgetting somebody before we left the field and I know there was no field in real life and nobody heard me, but it was just that crazy spiritual.  Absolutely amazing.

On the way back to the cabins, Andre came across a massive line of ants working leaves towards their queen, which was another neat experience to take in.  There were several massive “bouncer” ants (I think the actual ant-term is “soldier”) standing guard and lots of the little guys carrying cut up leaves.  Between that and the beautiful lizard I saw earlier in the day, we are deep in nature on this one.

Read another chapter of Without You, There Is No Us: Undercover Among the Sons of North Korea’s Elite, because I like to couple my yoga practice with soul-crushing reading (I don’t know if I’m going to get to my Khaled Hosseini book before the trip is over, but same difference) before heading to another amazing dinner!  Maybe some of the best fish I’ve ever had and a chocolate avocado mouse to boot!  Plus, some fancy tequila!

So tomorrow will be less mobile than today, but still have a couple of experiences to write about.  Basically, should be coming out of the day uber relaxed.