So, first things first, I’m taking the bed here home with me.  I don’t know where I’ll put it, and it’s only a single, but definitely one of the best ones I’ve slept on ever with PERFECT pillows, which is an absolute rarity.

The whole idea behind a yoga retreat is to allow you a chance to unwind a bit, but things still have to run on a bit of a schedule.  Ours involves two practices a day.  The first one takes place at 7 am and is meant to be a more active vinyasa or movement based practice, while the afternoon is based on myofacial release and restorative yoga. 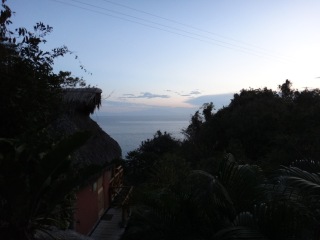 Today is “Double Movement Day”.  As Andre and Catalina put it, it’s a chance to get a “baseline” of the group, see where the practice can go.  I have absolutely no problem with that, though after the length of yesterday’s travel day, I was not quite sure how movement would work out for me.

Still, fantastic start to the morning.  The resort offers a light snack before practice, and I had amaranth granola for the first time, and will probably try to have it again.  Our practice this morning took place in a place called “The Greenhouse”, which – WAIT FOR IT! – is an old greenhouse that has been re-purposed into a yoga studio.  Sun was just breaking through the sky and the roof of the building was a multishaded patchwork of leaves, sticks, beams and glass.  A beautiful way to start the day.

I’ve been practicing with Andre and Catalina for a while now and the best way to describe Catalina’s style of yoga is “sneaky hard”.  You think things are nice and calm, and then all of a sudden an foot is on an angle and there’s a block under the other foot and you’re not quite sure what direction you’re going, but it’s great, and she’s fantastic and giving you multiple entry points if you can’t grab your toe while in a side plank.  This morning seemed focused on hips and glutes, but that may just be because my hips and glutes need the most focus.  After, Andre led us through a half hour of meditation, with waves crashing in the background and birds squawking in the trees.  I’m going to have to figure out how to position my foot so it doesn’t fall asleep, but a wonderful experience.

AND THEN THEY BLEW A CONCH TO TELL US BREAKFAST WAS READY!!!

Breakfast kept the string of great food going, with refried white kidney beans, some sort of spiced egg with tortillas mixed in, fresh papaya and some carrot muffins, among other deliciousness.  After came one of our long “free time” sessions for the day, which involved me walking along a rocky beach, taking some pictures, jumping in the water, and then finding my way to a sandy terrace where I had a fresh “Coco Loco” coconut (little bit of rum, gin, tequila and sweetness) before settling down to read. Conch blows again, and it’s Ceviche-Mania, as we’re treated to octopus, tuna and cauliflower (!) ceviche, as well as beet root brownies.  Whatever happens this trip, I am coming home FULL!!!

Took a little time to sit down and share thoughts after lunch, then made the walk towards Quimixto, the nearby town which I will be visiting in greater depth later this week.  The beach on that side of Xinalani is sandier, but the water has more rocks, so no swimming, but I did take in an ADORABLE birthday party from afar.  All those things you’d expect of a Mexican kids party were there, including a massive Hello Kitty pinata, music, floral sheets, a few above ground pools… it looked like the best time ever.

Next up for our Movement Lab practice was the “Jungle Room”, set deep in the – WAIT FOR IT! – jungle!  We started off with a simple “Get To Know You” activity, then moved to some rolling and crawling patterns which eventually ended with everybody moving around this massive, beautiful space, rolling over various cylinders in our own bodies (not on other people’s bodies, mind you), which wasn’t taxing from an endurance standpoint, but definitely tested flexibility and mental awareness. By the end of practice, the sun was setting, so we got to take that in from this beautiful space on high.

Waited for the next conch, which led me to a fantastic dinner with peanut chicken and legit tortilla soup.  Now, off to bed.  Move movement tomorrow, might check out Quimixto, might do a whole lot of nothing.  Gotta love options.