On our last night in Madrid, while we were enjoying some amazing Iberian ham, I mentioned something to Daina that kind of sums up this trip.

“I know we started in Morocco, but it feels like we went there on an entirely different trip.”

There was no going into this trip thinking that an experience in Spain would be the same as an experience in Morocco.  One is an established member of the European community with a history that sees it take its turn as a global power, with royalty and riches.  And that’s not to downplay Morocco’s history either, as it has its own fair share.  But in a lot of ways, a place like Alhambra reflects a turning point, where the Muslim influence across the region took a big hit and the power of Europe went on the upswing.

So, you’re left with two fascinating countries, one that is significantly “easier” than the other, which can be more frustrating.

It would be dishonest to say Morocco frustrated more often than not, but the times it did frustrate you, it went all in.  So you end up having to take things in small chunks. 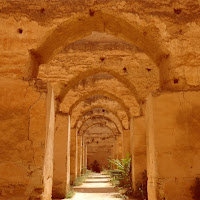 For instance, do you allow your experience in Meknes to be defined by your trip to the gigantic, impressive Royal Stables?  Or does the shopkeeper who tried to guilt you into some extra dirham so he “could feed the artist’s family” become the prevailing memory?  Is seeing a centuries-old leather making process ruined by the immediate run through the gift shop in Fes?  What do you make of the surprise local who appears out of nowhere to offer you hashish and a tour of his carpet shop after a different local gave you in the in to a beautiful viewpoint of Chefchaouen?

Morocco represents challenge and adventure, while Spain is just plain safe.  You know what you’re getting, when you’re getting it.  There’s something nice to that.  You’re being a tourist in the simple sense.  In Morocco, there are times – and not all the time – when you are made to feel like a bit of a target.  Never in an unsafe way, mind you.  Just in a way where you feel people trying to separate the dirham from your wallet.

And yet, I go back to that tour guide in Gibraltar who summed Morocco up as “Couscous, Camel, Come Back”.  Which is so insulting and debasing for what is truly an amazing country that you almost understand why you’re treated like a cash cow over there.

Regardless, this was definitely a fun, if not different trip.  Morocco definitely gets a recommendation with a strong “Be Ready” caveat.  Assume everything is a negotiation and be clear on what you want, and what you don’t want.  Try to sit back and enjoy the ride, but be ready to call BS when you need to and, above all, remember that you’re there for just a few days, while the guy trying to hustle you may be doing that for the rest of his life.

Spain is Spain, and doesn’t need my help or recommendation.  That said, don’t think I ever so consistently enjoyed the food experience anywhere as I did in Spain.  To say the tastes outstripped the sights is not an indictment of the things you can see in Spain, but the highest praise of what you can eat and drink.

On to the best of the best! 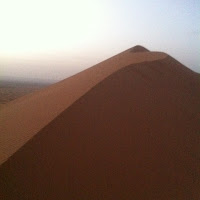 1 Climbing Erg Chebbi to see the sunrise.
2 The solitary feeling you get when you’re one of the few people inside the Royal Stables at Meknes.
3 Walking the Rock of Gibraltar and getting away from the taxi and cable car crowds.
4 Figuring out how the “Free Tapas” thing worked in Granada, and then fully indulging after visiting the Alhambra.
5 Wandering through the palmeraie and actually buying a carpet on the way to the Todra Gorge. 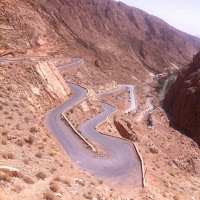 1 Sunrise at Erg Chebbi.
2 The cathedral in Segovia.
3 The intense and rewarding (intensely rewarding?) drive of the Dades Gorge.
4 The positive energy of Marrakech, which we appreciated even more after experiencing the less-than-positive energy of Fes.
5 Buying art in Tangier, thanks to the dramatic appearance of Olivier!

Thinking about the “Best Eats” here is a little bit harder, because some of our best stuff actually came from the guesthouses themselves in Morocco.  Also, this trip, Daina and I had some pretty wildly varying experiences in terms of food quality at Moroccan restaurants.  Then, in Spain, everything was delicious.  Regardless, here’s what we came up with.

Breakfast buffet at the Gray Boutique Hotel & Spa in Casablanca
Lunch at Terrasse de Epices in Marrakech.
Dinner at the Palmeraie Guest House in the Todra Gorge.
Lunch at Moriscos in Chefchaouen
Amazing chicken dish whipped up out of nowhere at Riad Zahraa in Meknes
Dinner at Bazaar in Madrid.
Raciones and empanadas at Tinto Y Tapas in Madrid.

The raciones at Diablo Cojuelo in Segovia.
Lunch (with flamenquin!) at Kumera in Toledo.
Honorable Mention: 100 Montaditos in all of the Spanish cities we visited.  Absolutely nothing special about it, but fun little fast-food experience on Wednesdays and Sundays.
So, we each added a new country, and Daina picked up a new continent and an appreciation for Europe outside of the airport.  Next year’s destination is a question mark, but sure we’ll have fun figuring it out as we get there!