Well, we got the big one out of the way. 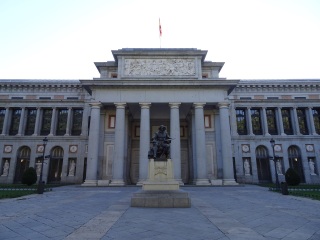 Madrid has three big art galleries, and the biggest most notable is the Museo del Prado.  After making our own breakfast in our flat today (yay!), we headed to the museum for 9:30 to get a half-decent spot in an ever growing line.

The museum has been open since 1819 and contains a formidable collection of art from across Europe, with an obvious focus on the Spanish masters.  Everything is laid out easy for you to see with the free map giving you decent idea of where everything is.

Now, when I say “European Art”, I mean you’re mostly looking at the oh-so-common themes of the Bible and Greek history for a large part of the museum.  Titian has a nice section for potraits, there is an impressive Flemmish collection, and some interesting side collections like the treasures of the Dauphin of Louis XVI and some Roman statues.  The obvious main draw is the collection of Spanish masters, with a heavy focus on Goya.  He actually provided a nice break from the gods and God motif, and his Pinturas Negras (Black Paintings) were particularly disturbing, especially one of a dog drowning.  In stark contrast, the rest of his work depicted some major events in Spanish history, but mostly comical, happy scenes of everyday Spanish life.

I liked the Pinturas Negras, Daina didn’t leave a huge fan of Goya, but what we could both agree on was the best part of the museum, the special exhibit for “El Bosco”.

Hieronymus Bosch, a Dutch painter, died 500 years ago this year.  The Prado has long had ownership of his best-known piece, The Garden of Earthly Delights, but for the anniversary of his death, they brought together his work from galleries ranging from Venice to Kansas to create a truly trippy experience.

Bosch enjoyed using triptychs for his most notable work, and his major theme was the idea of salvation and damnation.  He would combine these themes with absolutely bizzare images of people riding on top of flying fish, sailing inside of Dutch-style shoes, weird bird men.  You can stare at one of his pieces for a while and not quite catch everything,  Truly stunning art and great timing on our part to be able to see it.

After the Prado, we decided we would leave the other two galleries for a different day.  A quick bite to eat and then we took a stroll through the Parque del Buen Retiro.  Build in the 17th century and opened up as Madrid’s de facto “Central Park” in the 19th century, it’s an intensely peaceful green space with a beautiful “Crystal Palace” (greenhouse-style pavilion) and a huge lake where people can take rowboats for a spin.  After taking in some temporary art exhibits hosted by the Reina Sofia (more on that museum in a later post), we wandered back to the main streets, making a quick stop at the Mirador de Madrid for a…. view of Madrid.  Liking the city so far, but not the most iconic skyline.

Long rest at “home” during the siesta, then some surprisingly reasonably priced eats at Bazaar up in Chueca before turning in.
I’m sure tomorrow will be some variation of the same, and I think we’re good with that!