Skip to content
I am a gross, sweaty mess right now.
Backstory.
One of the best indicators of a great travel partner, platonic, romantic, or otherwise, is the ability to say “You go ahead and do your thing today.  I’ve got my own thing to do and yours doesn’t interest me.”
So while Daina cafés’ it up, I’m hitting the road to hit the Rock of Gibraltar.
We had originally thought if doing a stopover in Gibraltar on the way from Tangier, but had to decide against it based on reports of no left luggage at La Linea De La Conception bus station.  A report that has since become slightly untrue, as there now appear to be six coin-operated ones, though I’m not sure and of them would have fit our backpacks.  Plus, with everything else that went on that day, we would have been massively rushed and not do the touring I wanted to do today.
See, Gibraltar is obviously on the radar as a tourist destination, be it from Brits who want a piece of the Med that feels like home, or to day-trippers from Spain,  lots of people want to check it out.  It’s also a massive rock that has historically been fought over many an army.
Also, by tourists.
After the long bus ride from Malaga, you almost immediately spot ticket offices, promising tours combined with taxis combined with cable cars.  It’s easy enough to walk to the base of the rock, but not so easy to walk it, so Gibraltar made it easy to get up there.
I did not take the easy route.
After loading up on water and a wrap (because the chocolate croissant I had at 7 am wasn’t cutting it), I made the ascent from Gibraltar’s oh-so-British town centre towards the Nature Reserve!  Aka THE WHOLE ROCK! 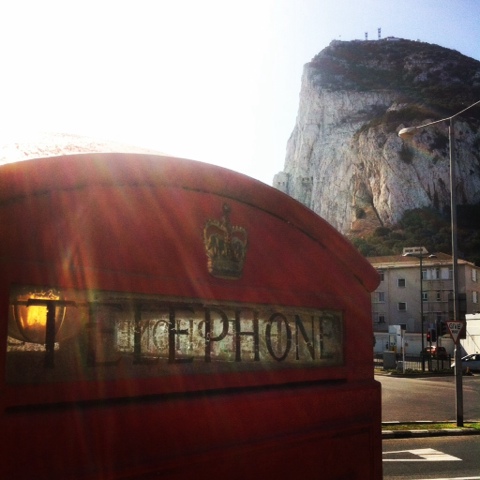 10£ gets you access to everything except for a tour of WWII tunnels, on gun and the cable car, and the stuff you can access is pretty neat.  First stop was the Moorish Castle, built first in 1160, and rebuilt in 1333, which provided the first of many beautiful views of the rock, the sea, and the towns.
A qiuck walk by the kitschy City Under Siege  exhibition, featuring informative displays but manequins that have seen better days, and the “last remaining lime kiln”, for lime aficionados before coming to the first overwhelming sight, the Great Siege Tunnels.  Built by the British during the Great Siege, where the Spanish tried to retake Gibraltar from 1779-1783, these run long and deep, and there’s plenty on display to keep you occupied.  Fascinating bit of military craftsmanship.
The next stop was the Ape’s Den, and to get there, there was a lot of walking.  And a lot of choosing the side of the road where taxis and minibuses weren’t.  Which was fine, because you’d get to see the beauty of it all before what came next.
I’ve been blessed to see a lot of monkeys  (is a statement I never thought I’d make), including the fascinating macaques that hung around the various temples in Sri Lanka last year.  Gibraltar is known for its tailless Barbary Macaques, which are every bit as impressive and adorable, bit seem to get by much less on scavenging for old offerings and more on people giving them stuff.  In fact, they have dedicated “feeding areas” and staff that put down food for them, presumably so they don’t steal too much from the tourists.  It makes the monkey interaction… odd.  Like, all the taxis stop to look at one monkey, but about thirty feet away, there’s a family doing family stuff.  You have to separate yourself from the crowds to get at the best stuff.
And the crowds move in… crowds, so if you’re walking, your peaceful experiences will vary.
After snapping a few monkey family portraits, I wandered up to St.Michael’s Cave, a grotto 300m above sea level, and got in just in time to see… the light show?
Yes, the cave was awash in colours as the tail end of an instrumental version of “Mercy Mercy Me!” played before the rocks went back to normal.  Again, added to the Epcot Gibraltar feel of the whole thing.
At this point, I wanted up near the top, and there were two prime viewpoints.  First was the cable car/gift shop.  I full recognize that there are times you need to take a cable car, and one day, I will be that age, but there were a lot of fresh, fit, fashionable people just poppin’ by, along with too many monkeys eating ice cream.  From all I’ve read, I’m assuming they stole it, because there are warnings everywhere about not giving monkeys food, and about being careful with your food.  Still, lots of look, a monkey while, again, you could find other, more chill monkeys just outside the platform.
The highest point on the rock (426 m) is up at O’Hara’s Battery, a giant gun, and for 3£ you do get the most unobstructed views of Morocco, plus access to a great WWII museum focusing on that gun.  From there, I wanted to find the Mediterranean Steps, supposedly the most beautiful walk on the rock, but also the least frequented one.
No taxi, no cable car.
A sign pointed the route, and it said it would take two hours to complete, which was pushing the limit on my return time, but I asked the guy at the O’Hara ticket desk and he said 45 minutes, tops.  And, sure enough, just as music from a “speed it up” alarm I had set just in case I doddled, I rounded the bend on one if the most beautiful, solitary walks I’ve ever been on.  Nothing but the rock, the seas, a handful of humans and some partridges. 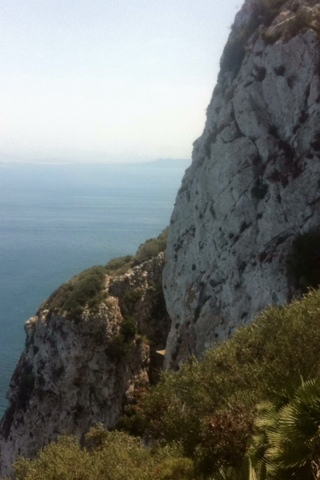 Coming to the Jews’ Gate (named for the Jewish merchants who settled there in 1704) I came across two taxi tours taking pictures of the strait.  I could hear one guide saying something in Spanish, though I could clearly make out “Morocco, couscous, camel, return.”
The translation for the English folks pretty much hit the same notes.
“That’s the Kingdom of Morocoo.  Any time you like, you can go, ride a camel, have some couscous, and come back.”
I know I’ve been hard on the Moroccan hussle on this blog, but I couldn’t help but think stuff like this from tour guides isn’t helping.  You’re reducing an ancient kingdom to something you can experience by eating food and riding an animal.  If I knew people were minimizing my culture that bad, maybe I’d hussle as hard as I could, too, especially if they’re being told to turn around after the camel ride.
But I digress.
Walked back into town from the Gate, stopped for fish & chips (INGLIN!!!) and did a little more wandering before getting to the La Linea bus station for the ride back.
Kind of debated the “Gibraltar-as-day-trip” idea, knowing it would take a while.  If you’re just going for the town, and you’ve been to England, it’s entirely skipable.  It’s England with extra souvenir shops, duty frees and fast food.  The Rock is the draw, and it’s an experience, to be sure.  If you’re into hiking, the Mediterranean Steps are great, and the roads are steep any windy enough that you feel like you’re going for a big hike, even if you’re sharing it with cars.
I don’t think I would have come from any further than Malaga, but it was worth it.