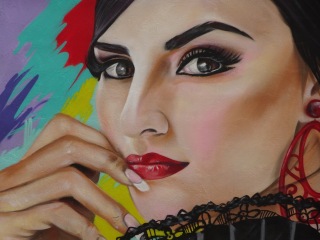 We hit Malaga pretty hard yesterday, covering a lot of distance, so we figured that today was a day to take it a little bit easier.

Malaga is known as the “City of Museums”, and there were a few that interested us that we didn’t get a chance to see yesterday.  But first, breakfast.

Once you’ve traveled a lot, you start to see that almost every country has some form of a “chain” restaurant.  Today, we found 100 Montaditos, which can best be explained as a tapas restaurant on steroids, if tapas meant small sandwiches, deep fried treats and fry and nacho variations.  We were enticed by the cheap breakfast option, but then realized that, on Sundays and Wednesdays, they have an “everything on the menu is a Euro” deal.  At that point, we were sold.

It was after 11 am, so deep fry and sandwiches were at least quasi-acceptable, but for 8 Euros, we had some gouda poppers, chicken bites, a few sandwiches and bacon and cheese fries.  And through Google, I also discovered they had franchises in Granada and Madrid, for our upcoming Wednesdays and Sundays, respectively.

So after filling ourselves with deep fry, we were off to the first museum of the day, the Carmen Thyssen Museum.  The museum, only five years old, is home to lots of Spanish 19th-century artists, and also featured an exhibit on Spanish “Pop” art, which was also reflected in a collection of music memorabilia.  Some highlights included a wonderful painting of a woman reading a book where she looked stoned out of her mind (intentional?), some stunning seaside pictures, and the aforementioned pop exhibits, which we weren’t allowed to take pictures of.

After a caffeine refill at a Costa Coffee (because deep fry and sandwich brunch), we made the longish walk to the Museo del Vidiro y Crystal (Glass and Crystal Museum).  This place is actually set up in somebody’s house, but it’s a pretty darn massive house where the first two floors are set up as the museum.  If you’re a glass lover, I imagine you’d be in love with the place.  If not, it still makes for an interesting walk through, although it appears a guide is mandatory, so there’s no “walk through at your leisure” option.  Still, our guide was nice and was able to tell us lots of interesting glass facts.

We stopped for some wine and tapas in the Plaza de la Merced before heading to the Casa Natal de Picasso, aka Picasso’s birth house.  Small display featuring information of Picasso’s Malaga (before he moved away), some of his early art, a rather nice gift shop, and information on his parents and family.  We came after 4, which makes it free on a Sunday.  So another nice, quick stop.

And that’s pretty much it for Malaga today.  Daina’s having a nap in the hotel, I’m at a Starbucks typing this out (because the good cafes are a bit further away than I want to go, and also, Starbucks).

I intentionally booked us three full days in Malaga in case we needed them, but also knowing that there were a few other options that could come into play on day three if we ran out of stuff we wanted to do.  So that appears to be what’s happening tomorrow.  I definitely do love this city, though.  Walkable, appears livable, tourist areas aren’t too overpriced (lots of locals running around).  Definitely worth a stop if you’re going through Spain.