Daina and I had an interesting conversation about how, if our trip was reversed, we probably would have appreciated some of the best parts of Morocco had we put our itinerary in reverse.  Like, had we had the shiftiness of Tangier and Fes at the start, we would have realized how… not shady some of our earlier experiences were.  In fact, most of our Moroccan highlights came early.

Well, our Spanish highlights are also coming early, and we’re hoping against a similar letdown.

Malaga has been great so far.  From our breakfast this morning at what was likely a seniors restaurant (based on clientele) to our dinner tonight at a tapas restaurant, there hasn’t been anything today (well, one thing, but we’ll get to it) that has got us down.  Quite the city. 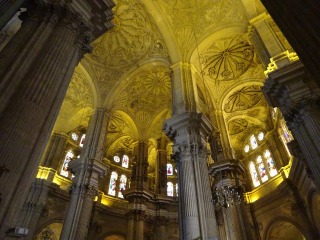 After passing through the central market and having the aforementioned “Senior’s Special”, we started wandering the streets of Malaga, making a long stop at a Mango Man to try on some clothes.  Our first official tourist stop was the Malaga Cathedral, nicknamed the “One-Armed Lady” due to it’s missing bell tower and its unfinished nature.  You certainly wouldn’t call it unfinished when you looked inside, though – just about as beautiful a cathedral as I’ve seen in Europe, and deceptively big.

From there, we made our way to one of Malaga’s many – and without question, it’s most well known – museums, the Picasso Museum.  Pablo Picasso was born in Malaga (we might be checking out his birth house in the next day or two) but left at 19 and never came back, so the collection here was brought back to celebrate him in his home city.  The most interesting thing is the amount of early, “normal” Picasso work here – like, ordinary figures with regular eyes and such.  Kind of like watching a reel of Babe Ruth picthing instead of hitting home runs – good, interesting, but definitely not what he’s known for.

The gallery also features several rotating exhibits, and we were lucky enough to catch one celebrating Jackson Pollack’s Mural, his work commissioned by Peggy Guggenheim for her apartment that was also displayed in the Vogue offices (which are facts I learned today).  There was also an exhibit focusing on how Picasso used eyes.  Overall, a great place to get a sense of a famous artist, plus a little something extra. 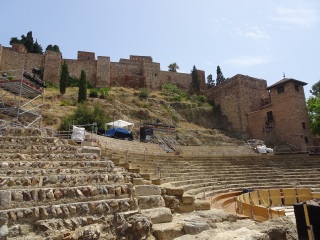 We wandered over to the Alcazaba, the old Moorish fort in the centre of town, stopping in at the Roman Amphitheater for a few minutes and then lunch for a few minutes more.  The Alcazaba is relatively big, and you can purchase a joint ticket to get you in to the “nearby” Gibralfaro Castle.  You get to walk up and down most of the ramparts, through the various courtyards, and into the palace within, all of which worth a stroll.

Now, part of the lure of Malaga was that it was close to the beach, so rather than immediately walk the steep walk up to Girbralfaro, we went back to our hotel to grab some beach gear so we could hit the water after making the walk.  And the Gibralfaro walk was a long one, and steep.  Not one of the most tiring ones we’ve done, but a good one to wear you out for the end of the day.  You are rewarded with some fantastic views of Malaga and the surrounding countryside, though, so it all evens itself out.

We then wandered down from the top to the beach, which was… variable.  There were some stretches that were clean and lovely, and others where there was a slick of plastic and garbage not ten feet from shore.  We settled down in one of the cleaner parts, closer to an inflatable water park for kids, and got some sea and sun time before making it back and spotting two maxi-pads just thrown about the beach, including one on a bench next to an old swimsuit.  There has to be a story there, but not sure I want to know what it is. 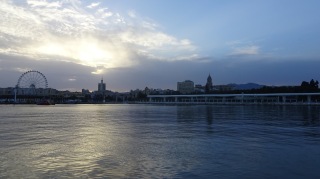 We wandered a different route through the harbour, passing by some shops, restaurants and a stunning sunset with the Cathedral, Alcazaba and downtown as a backdrop.  The streets of Malaga were pretty lively, but we had a long day, so we settled at a tapas spot near our place before wandering upstairs for a rest.

There’s still some museums to explore, and some beaches that are a bit further afield, so that’s what’s on tap for tomorrow.  Whenever we get up.