Skip to content
TRANSIT DAY!!!
And holey moley it was an exhausting one!
Once we get to Madrid, we’ve got an apartment, with our own laundry.  In order to get there with clean clothes, we figure we would ask our hotel to do our loads for us, so we’d be clean and ready to go as we left Tangier.
Did not go as planned.
See, after our dinner last night, I went up to the roof of our place to see if there was any laundry hanging.  Nothing.  This is after I had given the laundry to the front desk at 10 am.  I found the night guy at our hotel, an older, bald gentleman, as he was talking to three Spanish girls.  I ask him where our laundry is, and he says “it’s still in the machine.”
This is at around 11 at night.
So I explain to him that we’re leaving the next day for Spain, how we’re taking a morning ferry, and really need our clothes dry.  He gives us a “no problem” with “no urgency”, saying our stuff will be dry by morning.
Well, morning came.  “Dry” was a relative term and most of our stuff was caked in white detergent.  We had a ferry to catch, so I got on the laundry best I could, folding what could be described as dry and leaving the extra stuff to dry for another half hour.
This all started at about eight, which is when breakfast also “started”.
Note the use of quotes.
Needing to pack, I was going back and forth from waiting for breakfast to, well, packing.  I’ve eaten a banana at this point, but made it clear to the guy that we still want breakfast.  The three Spanish girls were back up and had got served.  This was at about 8:30.

Fine, we weren’t there, maybe he thought we has given up, but as we sat there waiting for food, after having been in and out if the breakfast area for about fourty minutes, the guy brings up some bread and coffee…

…and hands it to two girls that had just got up.
This got a rather loud “vraiment?” from me, at which point I stood up, got the rest if the stuff off the roof, and finished packing.
We put everything away, grabbed our gear, gave the key to the guy, making very clear we had paid the night before, and left.
I am not a huge complainer about accommodation, and I really do believe that most people in the service industry do their best.  But between our room being switched from one with a bathroom to one without, shitty beds,lighting that Daina referred to as “Russian Underground After Hours Club”,  the “surprise carpet shop” dinner, wet laundry and no breakfast, I feel like giving a big “FU” to Dar Tangier Medina.
Compounding my frustration was another guide/follower trying to take us to a hotel in the morning as we made our way to the ferry terminal.  We got lost, for sure, but we ended up getting bailed out by a kid who spoke three languages who actually knew where we wanted to go and didn’t try to take is somewhere else.  Daina gave that kid 10 dirham and gave 2 to the first guy.  Which is two more than I would have given.
So, aside from the ferry terminal, that was our last experience with mainland Morocco.  Overall, I loved a lot about this country, but when it frustrated you, it came in large chunks, and it was rarely due to some kind of institutional issue, but more a person who wouldn’t leave you alone, or who was trying to take advantage of you.
And I get it.  We have more.  The average tourist in Morocco will spend more in a week than most people make in a month, and that’s if you’re doing it on the cheap.  Canada has a higher standard of living overall, as does most of Europe, and I can understand that, if you’re seeing that “next door”, you want a part of it.  I don’t even know if there’s a better way to get it.  Tourists are source of income and “guiding” is a way to do it.  Getting somebody to shop at your friend’s place brings in dollars.  Still makes it mildly frustrating, but you just have to remember that those “moments” of frustration you experience are probably far worse, on a different scale, as experienced by the people working the hustle.

Might be that it’s harder to be a Moroccan in Morocco than a tourist in Morocco.
Something that would become very evident, very soon.
We grabbed our tickets, changed our money, went through customs and hopped the FRS “fast ferry” to Tarifa.  Pretty quick and comfortable experience, cafe on board, comfy seats as we started our trip.
So as we’re midway through our ferry ride, we end up powering down the engines and turning a sharp left.  Daina asked why we were turning back, and announcements were made telling us that the Moroccan authorities have asked us to wait.

Out the port window, we spot two small rafts, one of which could best be described as an inflatable mattress being “powered” by two guys with flippers.  The other looked like a Zodiac, but didn’t seem to be powered.  You could see the people in the “Zodiac” waving their arms around, while those in the orange raft were literally holding on for dear life.
Now, I’m not a rubbernecker.  I don’t like staring at potential tragedy and am more likely to help than just gawk.  In a situation like this, though, you’re literally reduced to “bystander” for obvious reasons.  So for about an hour, we were circling, trying to figure out what was going to happen to these people.
Finally, the Moroccan coast guard showed up for the rescue and we were on our way, but, as Daina put it, “there was a while there where we couldn’t see anybody for a really, really long time and I thought I just watched somebody die.”

Fortunately, I don’t think that was the case.  But wow.
While he was out on the deck, there was a Moroccan man ranting about how this is the fault of “people on the boat”.  How rich Moroccans hoard all their money and don’t give to the poor.  That’s why they feel desperate enough to make this crossing.  I don’t know if this is true, but this guy certainly thought it was, so maybe we’re getting more of an insight into Morocco than we thought.
Back to my point, though.  I’ve never been in a situation where my “best option” was to strap flippers to my feet with some buddies and float to a different country.
Might just be hard to be a Moroccan in Morocco.  Or whoever these people were. 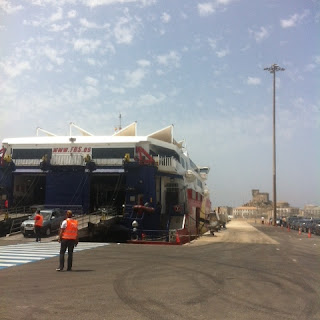 Anyway, after all that, Spain was breezy.  FRS had a shuttle from Tarifa to Algeciras, we could have walked to the bus station, but cabbed it, caught the next direct to Malaga (which was a bit late), grabbed a SIM card at the Malaga train station along with some Burger King (because F it) before getting another easy cab to our hotel.
Even glimpsed Gibraltar a couple times.  Neat.
Now, Malaga is apparently booked solid for the weekend, and our budget has booked us out of most places, so right now, we’re dealing with a squeaky air conditioner, or just no air conditioning, but I’m lying down on a full stomach, healing my back.
Nothing happening tonight, it’s was a big day tidy.  Malaga proper happens tomorrow.