Today was the longest day on the road, with about seven hours of driving from the desert to Fes lengthened by a couple chances to get out and stretch our legs.

We said a final goodbye to the Mezrouga Guest House, which kept up our run of amazing stays this

trip, loading everything up into a slightly more dusty Hamza the Hyundai as we made our way north.

Not wanting to spend seven hours in the car, I plotted out a few stops along the road to break things up.  This first was an old ksar (walled city) called Ksar M’aadid, just about an hour outside of Mezrouga.  Nothing too spectacular for a stop, the ksar was mostly intact, and its “caretaker” started to walk us around, but upon entering and looking around, we really weren’t up for a full tour of what looked like nothing too exciting, so we snapped a couple of shots and headed back to the car.

Little bit after that, we were caught speeding.

I originally had speeding in quotes, but here’s how it went down.  We saw radar warnings on the road and, spoiler alert, we learned that the “flash of headlights” is a universal sign for “cops ahead”, and Daina doesn’t think he was speeding, and I don’t think he was speeding, but the cop said there was a “discrepancy of speed”, so a light fine was involved and we were on our way.  Better not to dispute, sometimes, especially if radar is involved. 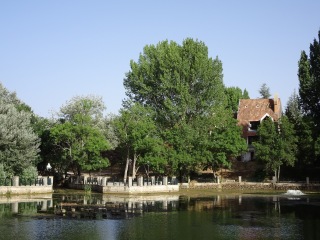 We got back on the road, with our next stop being lunch in the town of Midelt, where we had some fantastic turkey brochettes at the Complex Touristique de Pin.  The scenery continued to change, from the initial desert to another gorge before Midelt, then to mountainous, shrub-filled hills and valleys, and finally to cedar forests.  It was at this point that we approached Ifrane.

This town, basically in the middle of lakes and forests, looks like nothing else you’d see in Morocco.  In fact, that’s planned – it was built by the French in the 1930s to look like a European mountain resort.  We didn’t have too much time to spend there, but we did get out and do a “lap” of one of the many lakes before jumping back into the car to Fes.

Now, Fes…  I’ve got an interesting feeling about Fes.

It started when we parked and the same kid told us that our Riad was five different directions, leaving our side each time when we were walking, returning, then doing the same. Once we got to the riad, there were two French guys in front of us who seemed aghast that we were coming in to the riad with them because “they’ve booked it all out.”  We didn’t know what they meant but, sure enough, there was a mix-up with the booking and they had booked it all out.

Interestingly enough, the kid who was trying to take us five different ways to our riad (who then offered a trip back to his house, a tour of the city and weed) was speaking English, so I think the French guys thought we didn’t speak any French, and they started not so subtly stressing out in the riad courtyard, wondering what would happen.  Obviously, they had no idea that I could also understand what they were saying, outside of their rude stares.  Regardless, the riad did us proud, fixing the mistake by moving us to an upgraded room in a different riad which was actually closer to the medina center.  So, win!

We got settled in, learned a little about the city, and then made our way out for dinner.

We’ll be diving more into Fes tomorrow, but if I had to match a vibe to it so far, and I’m just going from past 9:30 pm, it would be Bangkok.  In terms of people trying to mislead you, telling you to go the wrong way, offering you weed, and some subtle prostitution (though, in this case, it was a lot of older European ladies walking around with young Moroccan men), the place has a certain degree of sketch.  In fact, when we found a place for dinner, one of the menu touts offered us weed, not too many feet away from the restaurant owner.  Daina could also make out people changing money and random bags of what he thought was “product” in the street behind it.  Sketch.

That said, most cities have an “After Dark” side, and Fes showed us a glimpse.  It’s a side we have no interest in what-so-ever, so I do look forward to seeing what the history side has to show tomorrow in the world’s largest medieval Muslim medina.