To say today was car-intensive would be a massive understatement.  In fact, without our own wheels, today would have been a much less enjoyable, much less rewarding experience.

But first, breakfast!  The accommodation bar continues to be raised this trip, with a fantastic meal prepared by the lovely Rita at Riad Dar Rita in Ouarzazate.  On her advice, we made sure to get up early so we could make the most of our day, and I can honestly say we did.

There was one quick stop we wanted to make in Ouarzazate before we left town, that being the Taourirt Kasbah.  Another backdrop for Gladiator and Prince of Persia,  this one was much smaller than Ait Ben Haddou though, much like it, we were besieged by “guides” the minute walked in to the place.  Completely not necessary, we were able to wander around on our own, making it to top for some nice views.  On the way down, Daina decided to duck into a shop to look for some souvenirs, so I decided to go down a back alley, of course picking up another “guide”, who actually asked for my ticket to the real kasbah as a form of “permission” to look around the village on the other side.  I flashed it to him and kept walking for just a little bit before making our way back to the shop where, because Daina had bought some postcards, we got a view from on top of the shop’s roof of the kasbah.

We hopped back into our car, which we have named Hamza the Hyundai (it’s a Hyundai i10), and headed off to the next kasbah which was located in the town of Skoura.  And, yes, we’ve already seen two in two days, but the route we took today and will take tomorrow is known as the “Valley of a Thousand Kasbahs”, so three doesn’t seem like too many.

Google Maps had directions to Skoura as being pretty straightforward, but directions to the kasbah we wanted to see, Kasbah Amridil, were a little less straightforward, taking us down several back roads. As we were doing this, Daina noticed a man on a motorbike tailing us and said to me “I bet that guy follows us and offers to be our guide.”  Moments after this, I have us take a left when we should take a right and soon we’re near a dry riverbed with tire tracks in it, so totally driveable, but in the moment that it took the two of us to decide this, the guy on the motorbike knocks on our window.
He, of course, asks us if we’re going to the kasbah and I say “Yes, it’s across here” at which point he says “I’ll show you” and drives ahead.  No choice on the guidance here, and I’ll say it was mildly helpful.

Once we got to Amridil, Daina and I got out to take some pictures and discuss if we were going to actually let this guy be our guide around the kasbah – and the only reason we thought of it was because the LP actually noted the cost of an unguided vs a guided visit, inferring that guide could actually be useful here.  We figured on 60 dirham for a tour and for him helping us get there via bike, and soon we were inside.

The kasbah was beautiful and actually had a lot of old relics like wooden locks, functioning stoves and olive presses.  It’s claim to fame, besides being another UNESCO recognized kasbah, is appearing on the 50 dirham note.  In fact, the “entrance” to the kasbah (quotes to be explained later) proudly state that it was the official 50 dirham picture.  We snapped our shots, took in the views, met some other Canadians, and were soon on the ground again.

Now, interestingly enough, about 10 meters away from the official kasbah entrance was the other official kasbah entrance.  Yep, the kasbah has two competing entrances, each ten dirham each, with the other one being a more traditional look at the unrestored kasbah.  I did a quick peek in, decided I didn’t need to drop another 10 dirham, and went back to our guy.  I gently reminded him that we had agreed on 60 dirham when he tried to get 70, then repeated back the earlier conversation verbatim (French helps) before we found the significantly easier entrance that Google didn’t recognize because, of course, it was across another dry riverbed. 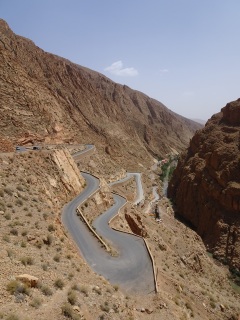 And with that, we were off.

We made a pact today to eat at a semi-regular time, so we stopped at Kalaat M’Gouna (which is known for its Rose Festival, being in the Valley of the Roses and all) for some pizza before making our way to the craziest part of the trip, the Dades Gorge.

So it bears repeating again that Daina is a champion driver, and if there was ever any doubt of this, please refer to the picture you see here.  The drive through the Dades Gorge is absolutely breathtaking.  As are the turns, the times you have to gauge distance with another driver, watching out for speeders, and trying not to look too far down the edge.  Once you start on the road, it’s about 26 kilometres to this view, and then a few more to where the Gorge walls come together on each other, Past that, four-wheel drive is recommended, and since that is a feature that Hamza the Hyundai lacks, we made the turn back the still-crazy road, making our way towards our stop for tomorrow, the Todra Gorge.

In fact, we could have seen the Todra Gorge today if we had wanted to, since it’s only a ten minute drive from our guest house, but as we drove through Tinerhir, Daina made the statement “That’s it for today, I think my focus is starting to go”, which, in Morocco, means stop driving and get off the road.
Staying at a beautiful guest house on the palmarie, with views of an old kasbah, and tomorrow we’re going to take a hike to the gorge before heading south to the desert on what I’ve been told is a very flat, very easy road.

Nothing wrong with that!