Skip to content
So after checking Sri Lanka off of the “Dream Visit” list last year, we were a bit stumped about where to go this year.  We whittled down the short list over and over and kept landing on Madrid as a destination.  Only problem is, the minute you “land” on mainland Western Europe, the price jacks up considerably.
So, that in mind, I started looking around for someplace nearby that would give us a bit more for the dollar.  East was France, north was the UK and west was Portugal, all of which didn’t make Spain any cheaper.  South, of course, was Morocco.
I hit Tunisia a few years back and remember the charming, friendly people there, and while I recognize that Morocco is a few countries away, I’ve heard fantastic things, so we decided we’d turn our Spanish jaunt into an overland journey.
We found a good deal on an open jaw that takes us through Montreal on the way to Casablanca, with a direct back from Madrid, so here we are, headed off.
First stop was another place neither of us had been, Billy Bishop Airport on the Toronto Islands.  Gotta say, as a Torontonian, pretty neat to be able to walk under the water and end up at an airport.  Relatively easy check in and security, then the wait for the plane to Montreal for our connection…
…which wasn’t exactly guaranteed.  See, I don’t know when “we’ve overbooked your flight” became an okay excuse in the travel industry, but it’s the one we got today at Bishop before we got to Trudeau.  However, ended up working for us as, once we got there (and Daina got in the right line while others were waiting for their names to be called), we got upgraded to premium economy, which, since there is no 1st class on this flight, is defacto first class. 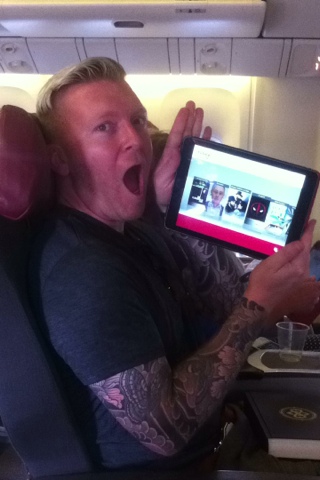 Complimentary iPads for all… Who sit here.

Seriously, don’t usually get too excited about stuff like this, but after looking at the menu (which was basically first choice if what everybody else got, but presented in a more fancy fashion), I actually typed “hotmeal” into an email address instead.  So I was mildly excited and, I guess, hungry.
Once we land in Casablanca and take a day to acclimate, the plan is to head east into the desert, then north through some of the Imperial cities before catching the ferry to Spain, heading overland to Madrid.  Weather calls for hot hot heat (30s to 40s and dry), so who knows, maybe Toronto in August will be a cooler experience once we’re back.