A day of the unexpected, some good, some disappointing.

First off, had the best sleep this whole trip last night.  I’m sure part of it was due to the sheer exhaustion of the Adam’s Peak hike, the fact that I only slept a couple of hours (if that) during the day after the hike, and went out for a little tea plantation walk in the afternoon.  The other part was that I was in one of the more comfortable beds and rooms I’ve been in during our stay in Sri Lanka – thanks, Slightly Chilled Guesthouse!  Great place, and I will fondly remember your curry dinners.
The plan today was to try to get the train to Ella from Hatton, but tripping things up a bit was Daina’s knee.  See, there was a little bit of tweaking that happened yesterday during the Adam’s Peak hike, and D’s knee was a bit twitchy on the wake-up this morning.  We knew that there was a chance of standing-room only on the train which, on a four hour train ride, was probably not the best way to do things.  So we were rolling the dice a bit on the way to the station, with the understanding that, if we couldn’t get a seat in 3rd (1st and 2nd were all booked up), then we might keep on driving straight to Ella. 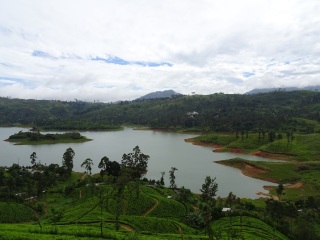 Our driver, a sweet guy named Tofiq, made a few stops for us on the way to the train station, giving us a chance to take a picture of a huge waterfall on the road in to Dalhousie and a man-made “lake”, which was actually the result of a hydroelectric dam.  He got us to the train station, where we discovered that, yes, the train seats were all booked and, although it would have cost an epically cheap 90 rupees (less than one CAD!) to stand in 2ndclass, D’s knee wasn’t having it.  Fortunately, we left some wiggle room in the budget, and we were able to keep the driver all the way to Ella.
The drive there involved making a quick bathroom stop at an old-school squatter, where we’re pretty sure the guy before us didn’t try to aim during his business.  Not because we saw any of the after effects, but because we heard him sloshing lots of water from the bucket next to the toilet into the toilet and, at one point, water came streaming out of the bottom of the bathroom door.  To his credit, whatever he did in there, he cleaned the crap out of it (phrasing) before it was our turn.  Same bathroom stop involved getting some short eats (coconut cookie, chicken samosa, tea and two pieces of what I can best describe as “rum fudge” for 160 rupees) before we were on our way.

While the train ride to Ella is supposed to be beautiful, the drive wasn’t half bad, either.  Plenty more valleys and tea fields, and our driver let us makes stops whenever we wanted to get pictures.  We had a good picture stop near the Devon and St. Clair waterfalls, two fairly massive cascades, which also involved stopping at Tea Castle St. Clair, a massive “castle” that was pretty much designed to provide tourists with a chance to buy tea.  So, of course, I bought some tea. 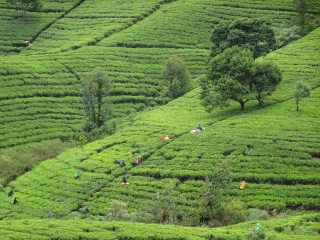 As we kept moving, Daina finally came across his “many tea pickers in the same field” photo opportunity, which was pretty picturesque – lots of colourful little dots in a sea of green working away.  I asked our driver about making a stop at Ravana Ella falls, which is supposed to be one of the more beautiful falls in Sri Lanka when there’s been some rain.  He said it was actually outside of Ella, but he would take us by another impressive falls…. one that had very little water coming down it.  Granted, it was impressive, but it was also a good indicator that Ella probably wasn’t getting the rain that Dalhousie was getting, so Ravana Ella was probably not going to be the impressive sight we were hoping for.   Soon after taking the dry falls picture, we were in Ella.
So, Ella is pretty firmly established on the tourist trail and is known for having some of the best guest houses in Sri Lanka.  And, without a doubt, our guest house is absolutely beautiful.  It’s also known as a place to do some great hiking which, unfortunately, we won’t get the chance to do because we want to maximize our beach time out east.  I’ll say this about Ella proper, though.  I think it’s a town where the “secret” is out and, once everybody was told, it kind of had to scramble to catch up and, frankly, it’s still scrambling a bit.
For instance, one of the busiest places on the strip (and it’s not a big strip) is the, I kid you not, Starbeans Coffee, which I believe was part of the Ella Holiday Inn (not, as far as I can tell, an actual Holiday Inn).  Packed with tourists, and the coffee was really good, but service seemed completely overwhelmed and the prices were on-par with what you’d pay in North America for a coffee.  Again, really good coffee, so didn’t mind, but was kind of thinking there’d be an adjusted price point.
Service was overwhelmed, so we didn’t eat there.  Instead, we went up the road to the Ella Village Restaurant, which was pretty highly rated on TripAdvisor, so we thought, hey, let’s go in.  The owner recommended an authentic Sri Lankan curry, which I was all for, and when it came it was just… okay.  700 rupees for okay, which, after having eaten in a few other Sri Lanka places, had their curry and seen their prices (way cheaper, in general), was not expecting just okay.
We did a wander down the road to view the Ella Gap which, truthfully, was beautiful, though we had to walk past a bunch of road work with some fairly crazy traffic whizzing by.  Best view was out of a hotel lobby we walked through, a brand-new hotel that the owner – smartly – built on a wonderful plateau so you could see the gap.  On the way back, we wandered past the “Tourist Information and Police” booth to ask about buses for tomorrow to Arugam Bay.  First police office seemed confused, spoke only a little English, then passed us off to another police officer who spoke a little more, and we were able to get some (slightly conflicting) information on when the buses where leaving.

Like I said, I don’t think there’s anything wrong with Ella per se, and I could see myself doing a few hikes here, staying a couple of nights to take in the natural beauty.  However, the hype doesn’t quite match the reality, and I think it’s partly because the town is racing to keep up with the hype.  Like it’s in an awkward in-between stage.
Anyway, it was meant to be a one night stopover, so I won’t judge too harshly.  Tomorrow, on to bigger, better, beachier things!