So first-thing-first, we are now officially on the hunt for a Sri Lanka dessert known as “Wattalapan”.

We went to “Chili’s” yesterday, and I use the quotation marks to indicate that, even though the logo and uniforms resembled Chili’s, it was not.  Good food, though, and we were very excited at the end of the meal to try some Wattalapan, a coconut custard that also contains deliciousness like cardamon, cashews, nutmeg and cinnamon.  In other words

, deliciousness.  So we ordered with the waiter and waited.

Well, 40 minutes passed (Daina and I were distracted by some wacky hi-jinks on Sri Lankan TV) and we realized there was no Wattalapan.  We asked our waiter, who then ran around looking for the stuff, only to inform us that it was in the fridge, but it hadn’t “set” properly because there was a power out earlier in the day.  So, basically, he was waiting for the uncongealed  dessert to recongeal so he could sell it to us.  All this after we had paid the bill.

So we got our Wattalapan money back, and the search is on!

Now today was the trip to Sri Lanka’s other ancient capital, Polonnaruwa.  If I could draw a comparison, for those who have followed the blog or want to Google to figure it out, Polonnaruwa is the Copan to Anuradhapura’s Tikal, in that the latter has more awe-inspiring structures, but the former handily hands it to the first one in terms of structure.  Much like Anuradhapura, biking is the best way to get around and, much like the bikes in Anuradhapura, the bikes we got today were somewhat suspect, with Daina’s brakes being mildly broken, and my bike being sized for somebody a good few inches shorter than me.  Still, good enough for where we were going, so after a fantastic breakfast, we were off!

Our guest house is a bit far away from the ruins, but it made for a scenic ride past rice fields and various street scenes and, after overshooting the ticket office and finding ourselves at the ruins, we got ourselves sorted and started the day. 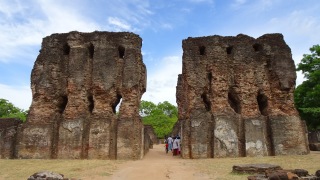 The diversity of ruins you’ll see at Polonnaruwa means that you will need a full day to really appreciate the site.  We wandered around the Rest House group first with its beautifully carved lion before heading into the main site, where we wandered around what was the Royal Palace and I found the giant walls that I had been mistakenly looking for in Anuradhapura.  Lots of locals coming on tour buses today, but it still never felt too crowded. 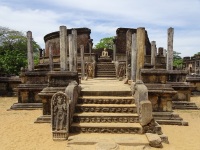 We stopped at the drink stalls for some King Coconuts (60 rupees each, that 60 cents for a coconut) before heading into the Quadrangle, a compact little area with just about every type of Sri Lankan specific ruin you could want, minus a big dagoba.  There was the Vatadage, a circular relic house with some fine moonstone carvings and four Buddhas on the inside; a “Temple of the Tooth”; a Bodhi shrine; the Thuparama Gedige, which is home to 7 great Buddha statues (sadly, the eighth and biggest was away for repair); slab inscriptions and some other beautiful ruins and statues.  Interestingly enough, with all these spiritual sites going on the, the non-Sri Lankan tourists were really forgetful about uncovering their heads and not wearing short-shorts – lots of site police running interference, making sure everybody kept up appearances. 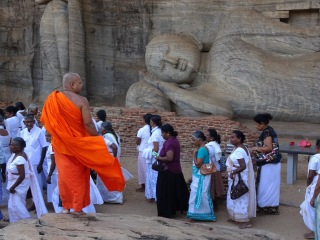 A few smaller dagobas and Hindu temples led us up to the Alhana Pirivena group, which was more spaced out that the parts we had visited before.  There you’ll find Polonnaruwa’s biggest dagoba, a newer white dagoba, a headless standing Buddha in a massive wrecked hall and a whole mass of other ruins.  Just a bit further north of this is Polonnaruwa’s biggest draw, the Gal Vihara, three beautiful rock-carved Buddhas, including a massive reclining Buddha that was being worshiped by several followers just as we walked in.  That wasn’t the end of the day – there were still some ancient painting to see a kilometer north, and a statue of the King to see further south – but it was definitely the best part of it.

Long, hot bike ride later, and a stop at Cargill’s Food City to buy the “lunch” we never had (see, chips, sweets, drinks), plus a quick trip across the road to buy a D-type plug adaptor, then we were back at the guesthouse to wash the dirt away!

Apart from possible safari trips or day trips to ruins abroad, Polonnaruwa is kind of a one-trick town, but it’s a hell of a trick.  Go!