So not only is the Lonely Planet a great travel guide, it also doubles as a bug killer.

The cockroach that was making out with Daina’s toothbrush yesterday came back in the middle of the night with a crazy screeching noise, almost like a rusty gear on a fan (which is what I thought it was).  I found the guy in the bathroom, tried to smash him, and of course he ran out into the room proper and hid under the baseboards.

Later that night, the screeching was back, but the cockroach (or mutant cricket, whatever) was invisible.  I managed to drown him out by putting my ear on one pillow and putting my hand on the other ear, which worked well enough for me to go to sleep.

When we woke up, Daina was in the shower and I was managing stuff in my backpack, and then the little bugger crawled out from under the bed.  Lonely Planet was the closest thing I had, grabbed it and, not wanting another night of screech sleep, or a pregnant toothbrush, killed the bug…ger.

Anyway, decent start to the day.  Some practical things needed to happen in Trincomalee, like getting to an ATM, buying a few souvenirs and getting D a new toothbrush.  All those things were done in pretty short order, and then we were on to the sights of the city.

Even though Trinco is close to the ocean, it’s more of a harbour than a beach.  So, not much swimming.  The neatest sights happen up on the peninsula.

The first thing you’ll see is Fort Frederick, built by the Portuguese in the 17th century, moved into by the Dutch in the 18th, and then occupied by the British years after that.  The Sri Lankan military still uses it as a base, but you can walk around the grounds mostly free, checking out the Gokuna Temple with its tall, white Buddha and its views of Trincomalee.  Just know that you don’t have to buy a ticket to see the temple – a monk (?) tried to get me to buy a ticket and, since I was waiting for D to finish up on some pictures, I went back to talk to him.  At that point, a guard came up to me and asked why I didn’t see the temple.  I told him I was waiting for my friend, and the guard said “Don’t let that man tell you to buy a ticket, you don’t need one, just take off your shoes.”  So, we took off our shoes, walked around, saw a standing Buddha!  And deer! 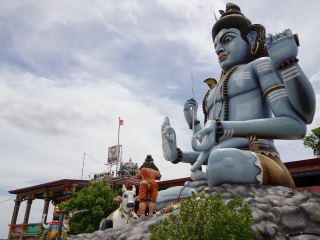 At the end of the fort is one of Sri Lanka’s five historical Hindu temples, the Kandasamy Kovil, which has been a site of worship for two thousand years, most recently for the phalic lingum, a stone penis-looking thing.  The temple is all sorts of colourful, though not as ancient as the rest of the place – it was built in the 1950s.  No pictures inside, but it’s great to go in and watch the various Hindu tales played out in bright sculptures along the way.

After finishing up here, we were getting hungry and wanted to get back to the beach for lunch, so off to Coconuts for some Devilled (spiced) Fish and Sweet and Sour Prawns, and a King Coconut with lime.  A crow pooped on me – that was fun – but the good thing about being close to the ocean is you can wash off pretty quick.  Some more fun in the sun by Fernando’s, now back for some cool time in the AC before headed out for a last dinner on the beach.

For a first Sri Lankan beach stop, Uppuveli was a pretty darn awesome one, cockroaches aside.  Tomorrow, we head inland for more history in the second ancient capital.  We won’t be missing any heat, but we will be missing the fantastic beach.  More of that coming later, though.