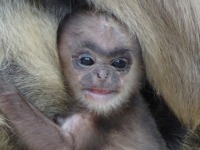 So, once again, a day of biking around Anuradhapura, though not around the ancient city itself, which would have cost us another $25 a pop for things we already saw.  In fact, at one point in the day, we made our way to the archaeology museum, which I thought wasn’t part of the tourist ticket, only to be asked if we had our tickets.  Once we explained that we wanted to see the museum, they explained the museum was closed and we went about the rest of the day, but rest assured, you ever come to Anuradhapura, you’re not sneaking around without buying your ticket.

No, our first-and-biggest stop today was the Sri Maha Bodhi, the world’s oldest historically verified tree, planted in Sri Lanka 2000 years ago from a cutting transplanted from India.  Bodhi trees are quite big in Buddhist culture, and with this one having been tended to and protected for two centuries, even during various occupations and invasions, shows how important this one has become. 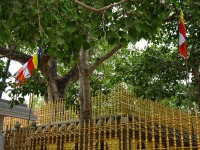 A temple has been built around the tree and, much like the ceremony we witnessed yesterday, things were in full swing today.  Today, though, was all about bringing offerings of fruit, flowers, rice, money… the Bodhi tree was getting a lot of goods today, and what was equally fascinating was the infrastructure involved in clearing the altars so they wouldn’t get overly crowded and messy as the day went along.  Basically, it was guys wandering around with giant blue buckets that were carried on two large sticks, dumping everything in.  Made for a less spiritual sight than flowers laid before a statue before a tree, but logistics. 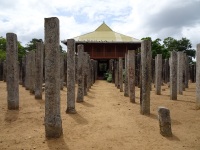 We wandered the area around the tree, taking in the Brazen Palace, so called because it was covered in bronze roof back in its day, before heading to our aforementioned closed museum.  The guards politely pointed us towards the lake, as there were several gardens and temples there.

We took in the Mirisawetiya Stupa, another beautiful white stupa in ceremonial use, before heading down to the Tissa Wewa tank for some biking.  Now, tanks were the Sri Lankan’s irrigation system back in the day, massive man-made lakes that just defy description and are on par with just about any ancient building project.  Basically, they changed the face of the island – literally – because without them, you wouldn’t have the green, grown, controlled Sri Lanka you have now.  Biking along Tissa Wewa was nice, as it gave us a chance to glance in at the old Royal Gardens before checking out Isurumuniya Vihara, another monastery, this one cut into the rock with some lovely carvings of elephants near the water.  It’s also home to a fine collection of carvings, including its most famous one, The Lovers.  A bit more out of the way than the main Anuradhapura sights, but worth the bike ride down, just for the ambiance of the lake if nothing else. 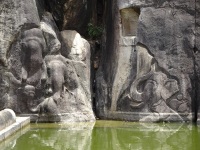 After biking past a brand new stupa being built, we grabbed some more lunch at Casserole before making it back to the guest house to decide if we were going to try and squeeze in a trip to Mihinitale this evening, possibly an impromptu safari tomorrow, or if we were just going to take a load off and casually visit Mihinitale tomorrow.
Fact that I’m typing this right now tells you where our heads are at.

So, well rested and well fed, we remain on schedule for more adventures.  Hoorah!