Last day in the Big Apple, last chance to burn through the CityPass. 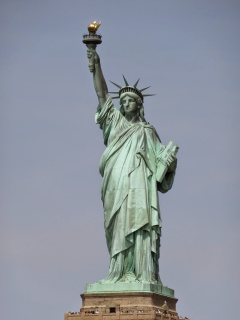 At some point before this trip, I was contemplating visiting Liberty Island to see the statue.  Not terribly interested in going up to the crown, mind you – being able to Google most views these days, it didn’t look that impressive.  That’s actually how I found out about the CityPass.  It’s also how I found out that a trip to Liberty Island takes a long time.  Considering most recommendations for seeing the Statue involved taking the Statten Island Ferry for free…  Well, not this time.

So still wanting to get out on the water, we decided we’d be checking out the Circle Line Cruise, which takes you from the site of the USS Intrepid museum (famous old aircraft carrier which now also houses a space shuttle), loops the south end of Manhattan, past the Statue, and then over to Roosevelt Island before looping back.

Really, if you’re looking to see all the architecture, this is the way to go.  You get great views of the Empire State Building, the Chrysler Building, the UN, the Brooklyn Bridge, the Statue of Liberty (of course) and a few other choice views of Statten Island, Brooklyn, Queens and New Jersey.

As far as the ferry itself goes, it’s pretty nice.  There’s the obligatory “Stop and Take a Cheesy Picture” opportunity behind a flotation ring, which Daina and I mockingly took part in, only to actually end up buying the picture, because it actually turned out pretty good.  We had to start off inside of the boat and were allowed on the bow once we were on the water.  Little tip for everybody – if you want to get a spot on the top, you need to be there AT LEAST 45 minutes ahead of time.  We got there about 20-30 before the tour started, and top deck was packed.

Still, no complaints about the bow position, other than a group of Canadian girls next to us who weren’t quite doing our country proud.  Got some great shots, a bit of a tan, and some New York Harbor water in my mouth.  So staph or something.

The Circle Line Cruise only takes about an hour and a half.  Since we had walked the dogs a bit before nine, we had a good deal of time to take in another major sight.  We thought we’d check out the High Line, one of New York’s more recent, but pretty amazing attractions. 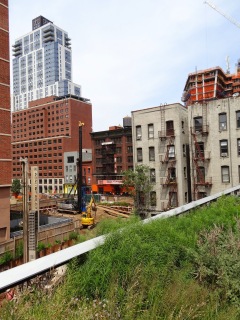 Originally meant to carry freight to New York’s industrial zone, the High Line was re-purposed in the 21st century, with ground being broken in 2006, with the first section being open in 2009.  Even though it’s relatively packed with tourists and locals out for a walk, it’s not “New York Packed.”  You get to take in all sorts of neat art and some great views of the city.  We got on at West 34th Street and took a nice, calm stroll down to Gansevort in the old Meatpacking District.

So while the area around the High Line basically used to have the land value of buildings next to a train line, it now has the land value of a newly renovated, chic art-park thing.  Condos are going up all along the High Line, and I’m wondering what it might look like in a few years.  I’d love it if we could pull something off like that on or around the Gardiner in Toronto, but we tend to think big ideas more than implement them here, so we’ll see what happens.

We were pretty hungry by the end of the (short) trek, and even though NYC has a rotation of some its best food trucks near the Gansevort entrance, we wanted to sit down.  Problem is, you sit down near the High Line, you’re paying high prices, so we wandered a bit until we found a place called Tavern on Jane, which had a totally serviceable brunch, before heading back to check in with the dogs. 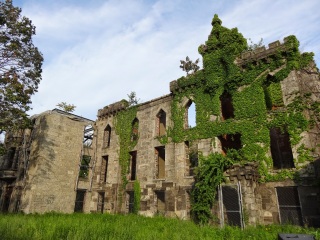 Now, this is where the tourism part of NYC kind of came to a stop, as we had to get our stuff packed and D wanted to surprise his sister by giving the apartment a big clean-up.  Seeing as how I’m pretty much barred from cleaning most of the time, I figured I’d try to explore Roosevelt Island a bit before heading out for dinner.  Since we were pretty central on the Island, I decided I’d take the south route, which takes you to the Four Freedoms Park that was established in honour of Franklin D. Roosevelt and his “Four Freedoms”, which were ” freedom of speech and expression, freedom of worship, freedom from want, and freedom from fear”  Thanks, Internet, for reminding me.

The park makes a great walk, as you go past the old, abandoned smallpox hospital, which has been overgrown by a host of vines, before arriving at the park itself, a giant triangle that juts out into the harbour.  You get some great views of the UN Building (makes sense, considering the park theme) and of the Chrysler Building, as well as the Queensboro Bridge.  I wanted to loop up to the north end of the island and see the old lighthouse, but time wasn’t on my side, as we had a dinner with Daina’s friends Samantha and Sam (really) at Westville. 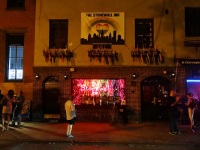 Now, if you’re from NYC, you’re probably asking “Which one?”  If you’re not from NYC, you’re not aware that there are four Westvilles, two of which are in places with the name “Village” in it, another in Chelsea, which is village adjacent, and then one location in a place called “Hudson”, presumably not in the river itself.  So we somehow thought we were meeting at Westville West, which is on 10th Street, which would give us a chance to stop by and take a picture of the Stonewall Inn on Christopher Street.  We ended up running late due to everything except the cable car being shut down on Roosevelt, so once we finally made it to “Westville”, we found out it wasn’t actually our Westville.  Daina hopped on his cell to try and figure out where the Sams were, while the hostess (who may or may definitely have been stoned) kept asking us if we wanted to go on the waiting list in a voice that screamed “Oh yeah, people are still here…”  We finally figure out that we were supposed to go to Westville Chelsea on 18th Street (New York Problems) and wandered our way up.

Great food, with Daina having some sort of veggie quinoa burger concoction and me having a chicken pasta with organic things and vegetables.  Great environment and, considering I wanted a “typical” New York dinner out, it fit the bill.

Overall, New York was pretty amazing.  It’s big, it’s complicated, it’s too big to see in just 5 days.  Definitely going back in the not too distant future.