As cute at the dogs are, you can’t take them out for a day of Kirk and Daina city walking.  We had a dog walker’s number left for us “just in case”, and we figured that if we were going to fit all the things we wanted to fit in to a day, this would be just the case.

Midtown was our major destination today, with the plan being to start at the Empire State Building, grab breakfast, move on to the MoMA, while checking out some of Midtown’s other sites.  The self directed “Taste of Midtown” tour.

Just made that up, but if any travel agents want it, it’ll be $5 a pop. 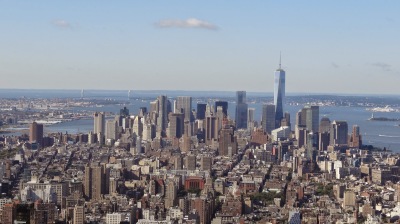 During most of my entries on NYC, I feel I’m not typing anything that people don’t already know.  So, suffice it to say, when I tell you that it’s by far New York’s most iconic building, you’re likely to say “so?”

Well, World Trades and Freedom Towers and Gehry’s and everything else aside, while New York has continued to grow up and up, this guy has stayed constant and iconic since 1931.  The verdict is still (personally) out on whether this or Top of the Rock gives a better view of NYC, but come on, had you even heard of Top of the Rock before I just typed it?  I hadn’t.

We got there pretty much at open, which meant a significantly reduced line.  You’re still going through security, getting your bags x-rayed, going through several ticket checkpoints, where the employees shift between not caring, talking to each other but not paying attention to you, yelling at you to tell you where to go, and politely offering tips, like how to take the stairs from floor 80 to 86, since it’s generally faster than the line.  NYC customer service is kind of like waiter service in Rome.  Not always reliable, sometimes confrontational, seemingly more concerned about anything but you, but ultimately, you get what you need.

It’s a bit drafty up top (height = wind), but everything looks amazing.  It’s not too hard to pick out the major landmarks and getting some good landscape shots is easy, though I’m wondering if anybody’s “selfie” (or any portraits) resulted in anything but heads and wire mesh.  I’d imagine, during the busy times, that getting near the ledge may require a couple of elbows and grunts, but at this time of day, it was manageable and respectful.

With the first stop out of the way, it was time to get some breakfast.  We settled on W Cafe, which provided some solid, basic breakfast for us, before continuing the walk up 5th Avenue towards the MoMA.  We stopped off at the New York Public Library to get some pictures of the lion statues.  The library itself is pretty beautiful, but I was secretly hoping for the lions to come to life a la Ghostbusters.  Not really, but that’s honestly my memory of that library from popular culture.  I’m sure there’s more to it than that.  Like, books.

We did some quick “we’ll come back to you” stops at Rockefeller Plaza and St. Patrick’s Cathedral before finding the MoMA entrance.

The Museum of Modern Art

The Met has it beat in scale and (obviously) in historical range.  Still, it took us a fairly leisurely 3 hours to get through everything, and it’s an impressive everything to get through.  More Van Gogh and Picasso, along with the more “modern” side of things with Andy Warhol’s Soup Cans and some Lichtensteins as well.  It’s accumulated over 150,000 works in its 85 years.  If the Met is overwhelming, this one is a bit easier to get around.  More like a good book that you can reread instead of the Met’s multi-part epic.  My personal highlight was stumbling across Christina’s World by Andrew Wyeth.  It featured in a few memorable scenes in one of my favourite comic series, Preacher.  I hadn’t expected to come across it, so seeing it was definitely a nice throwback.

Post MoMA, we decided we’d do a walking loop around Midtown, first making our way to some of the places we strolled by.  We wandered past Rockefeller Center first, taking in the facades of Radio City Music Hall and NBC Studio before wandering through the main outdoors plaza of the Center.  Much like the “empty” view of New York from the Brooklyn Bridge Park doesn’t exist, you don’t get the best of views of the golden statue in front of the main tower of the center.  The best view is taken up by a restaurant that you have to sit at to get in to.  A bit of a waste, but hey, it’s private property, so whatever.

We crossed back over onto 5th Street to take a glimpse at St. Patrick’s Cathedral.  It’s undergoing some heavy renovations inside, but that actually added something to the view, providing lots of steel scaffolds to border the stained glass and arched ceilings.  From there, the walk took us to Grand Central Terminal, which was impressive for its size, but visually it wasn’t as amazing as I thought it would be on the inside.  It may just be that we’re past the age of train travel, but I saw it as more of a nicely put together husk where, more than half a century ago, the world would have congregated to see the skyscrapers.

Going from the less impressive to the more impressive, we crossed out to Lexington Avenue and were met with the Chrysler Building.  I’ve always thought it was visually more stunning than the Empire State Building, and this sealed it.  The first view of the building was its reflection in a more modern, nearby tower.  The lobby looks like it was ripped from an ad for Fritz Lang’s Metropolis, all Gothic and Art Deco styles, a beautiful marbled ceiling mural and gilded elevator doors.  It won’t take you more than five or so minutes to look around the lobby (past the lobby, it’s off limits to anybody who doesn’t have security clearance), but its definitely worth a pop-in. 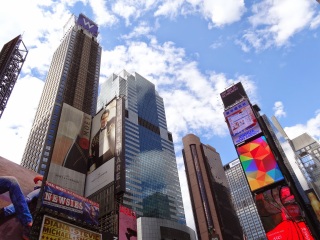 Taking East 42nd Street and passing by Grand Central’s beautiful clock, our next stop was Times Square.  Again, this may be a situation where having seen it on TV and living in a major city made it looks… just about as impressive as you thought it would be.  Lots of lights, videos, advertising, and creepy, CREEPY buskers – I’ve never wanted to have my picture taken with a Teletubby, and if I took one with the “Teletubby” in the square, I’d feel… a little dirty.  The Disney rule of “Never take off your costume” doesn’t apply here, as I saw Super Mario, Minnie Mouse and Ernie all wandering around with very human-sized heads that were neither mustached, female or orange, respectively.  We did “the loop”, walking from 42nd and 7th to the NYC TKTS stand at the north end of the Square, before heading over to Eighth Avenue to get away from the crowds.

Rather than take the subway to our next stop, we ate Subway, where I had to wait an inordinately long time for a girl to get out of the bathroom.  When I gave the (presumably locked) door a little “Hey, hurry up” jostle, I ended up opening the door, revealing (phrasing?) that she was just sitting on the toilet on her phone.  Funny thing was, she was so engrossed, she didn’t even look up or notice the door had opened.  I waited another five minutes and knocked, to which I got a “yes?”  I replied “Want to use the washroom, get off your phone please.”

30 seconds later, she was out. 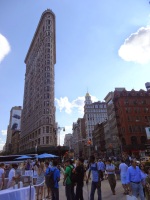 If I ever catch any of my friends texting in an unlocked Subway bathroom when other people are waiting, you’re getting punched.  Or at least made fun of.  A lot.

After walking for most of the day, and realizing that we were getting closer to the dogs needing (and not waiting for us) to pee, we decided we’d put our MetroCard to use to check out a few other nearby sites.  First jump was a quick one down to the Flatiron District to see (wait for it) the Flatiron Building.  More of a “check” off of the list than a must-see, the nearby Madison Square Park is a nice place to recoup for a few minutes.  Funny story – small by today’s standards, the Flatiron was actually the tallest building in the world until 1909!  Who knew?

As time to go home drew a bit closer, we figured we’d make a quick trip down to the East Village to walk along St. Mark’s Place.  It was more of a cultural fly-by than a legit stop and enjoy the neighbourhood, and while we made a mental bookmark that we could come back here for dinner at some point.  We wandered into some vintage clothing stores, past some shops and some architecture that just screamed “New York Village”, and made it all the way to Tompkins’ Square Park before doubling up to the subway to get back to Roosevelt. 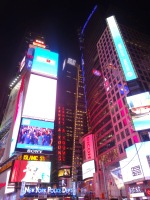 A quick snack and a feed and walk of the dogs, and we were out again.  We were pretty zonked at this point, but we had comitted to making it up the Empire State Building for the night view.  Apparently, if you get there after 10 pm, there’s not much of a line and you get to the top pretty easily.  Once we got there… not so much.  Big line at 10, so we popped into Starbucks to find a place to get some real food before trying again a bit later.  We settled on Little Italy Pizza at 33rd Street and 5th Avenue, just around the corner.  They advertise themselves as “New York’s Best Pizza”, and I’m not going to argue.  I had an amazing Buffalo Chicken pizza, while D settled on a cheese slice, being vegetarian.  This gave us enough fuel to go check the line again – which had gotten longer, it seemed – and call an audible to walk to Times Square to see how it looks lit up at night.

Again, it was impressive, but it’s Times Square.  Seeing it in person isn’t any more or less fascinating than seeing it on TV.  Still, made for a good wander, with some flashy displays here and there, before checking the Empire State line again.  Hadn’t changed.

Finally making it back to Roosevelt Island sometime after midnight, we could officially call this one a “full day.”