It’s a question that you’ll inevitably ask when traveling, most often when you’re visiting a famous museum or gallery.  You’re bound to get a variety of answers, some useful, some… douchey.

“How much time should I spend at…?”

Generally, it’s a valid question.  Any search will inevitably give you a stupid answer.  The best one I found when asking “How much time should I spend at the Metropolitan Museum of Art” (note: the person who had started this thread used the words “need to” instead of “should I”) read something like this.

“I don’t understand your question.  You don’t need to spend any time if you don’t want to.  If you’re asking how much time could you spend there, it depends what you like.  If you only see one room and spend five minutes there, than that’s your trip.  If you spend 30 seconds at each piece, you could be there for days.”

Great help, right?  Kind of makes you want to send an e-punch through the computer.

Everything else I read basically said “As much time as you can”. 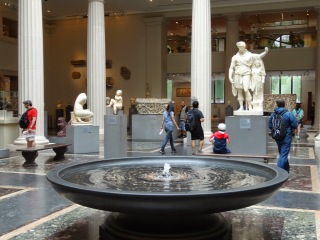 The Metropolitan Museum of Art

We walked past the place on our way to the Guggenheim the day before and were blown away by the sheer scale of the place.  It screams “take a day”.  My personal benchmark for galleries is the Hermitage in St. Petersberg, where I spent the better part of a day and was basically running to find an exit at closing.  I figured The Met would be similar.

I may have a new benchmark.

First thing first, a little tip.  The main line goes through the Great Hall, where you buy your ticket for a suggested donation of $25.  Yeah, you could technically wait in line and pay a buck.  However, since we already had our tickets vis a vis the CityPass, we could skip the big line and enter on 81st street, which plops you right in the Greek and Roman gallery. 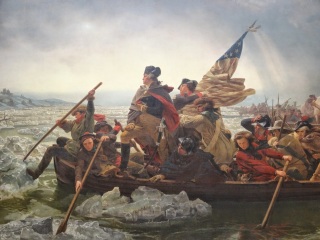 Long story short, you’re not seeing this place in just one day.  It’s 17 acres.  There are two million objects in its collection.  You have two fully reconstructed Egyptian tombs, a massive selection of classical sculpture, European paintings that span from the Renaissance to the modern age, an entire wing dedicated to American art, Asian art and sculpture that spans from Iraq to Japan, artefacts from the Americas and the South Pacific… It’s massive.  Gauguin, Van Gogh, Vermeer, Carvaggio, Picasso…  I could list everybody you may or may not know, but I’d probably crash the site.

Basically, I skipped modern art and most of the American section, as well as a good chunk of Europe, and it still took 5 hours to see what I saw.  Which means I’ll be going back the next time we’re in New York.

Back to Roosevelt to take care of the dogs, grab some sushi at Fuji East, relax a bit and then…
Brooklyn Bridge at Sunset
TheBrooklyn Bridge was completed in 1883 and has often been called one of the most beautiful bridges in the world, and I don’t think that there’s any denying that the Manhattan skyline is the most distinct on the planet.  There’s even a dance named after it, for goodness sakes!
… 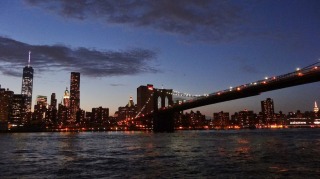 K, dumb, but what I’m trying to say is that the walk from Brooklyn to Manhattan is worth the experience and, as a biker, I’d be okay if that bridge was my daily commute.  Minus the fact that cyclist me would probably be pissed at tourist me for wandering into the bike lane.
We started off by taking the subway across the river and walking to Brooklyn Bridge Park for views of the city at sunset.  It had been raining while we were I the Met, and there was just enough cloud cover to give my shots a layered backdrop.  We hit both sides if the park and then wandered up a bit before finally finding the stairs that gots on to the pedestrian walkway. 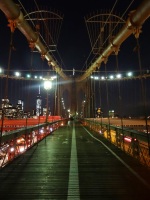 I could go on about all that you can see from the bridge, but that would be redundant, as you really can see it all.  Freedom Tower looms big on the former Twin Towers site, the Empire State Building is way off in the distance, and you get a great juxtaposition in good architecture vs ugly architecture by comparing the New York by Gehry to the hideous Verizon building.  The walk to the end drops you right at City Hall, an impressive structure in its own right.  This is where I decided to have my massively overpriced New York street dog.  Tasty enough, not worth the money, but it did put some punctuation on one of the defining sights if the city.