First off, an airport note.  It’s easier to get through US Immigration at Pearson airport than it is to check in at an automated Air Canada kiosk.  True story.

This is also the true story of to New York for five and a half days!   I haven’t been since I was a kid, and my only real memory is going to FAO Schwarz everyday, my brother pitching a fit because a hot dog at a restaurant we went to came on bread, not a bun, and a LONG line at the Empire State Building.  I’m sure two of those three things will be the same this time around.
What won’t be the same will be accommodation.  In fact, there’s some luck involved here. Daina’s sister currently lives in New York, but on Roosevelt Island, which is Manhattan adjacent.  So no hotel recommendations, but also more money to not spend on hotels.  I call it a good trade.

Getting from Roosevelt to Manhattan basically involves one of two forms of transit.  First option is the F train on the Manhattan subway.  The other option, which we took today, was the Tramway.  If you’ve seen Spider-Man, you may recognize the tram from the climactic Spider-Man v. Green Goblin encounter.  It makes for a nice ride and, if it’s running on the rush hour schedule, it makes for a great way to get to downtown.  You’ll get a good glimpse of the Empire State Building, the Chrysler Building and the United Nations Building.  Step off the tram and you step into skyscraper central.

So, having grown up in Toronto, I’ve obviously seen skyscrapers.  The height of the buildings in New York isn’t what gave me vertigo.  It was the “stacked” nature of place.  Toronto’s pretty good at allowing for some sky in between the big buildings.  In New York, it’s a perpetual state of tall next to tall.  I can definitely see how some people get a bit dumbstruck when the come to the city for the first time.

After a quick walk-by of Bloomingdale’s and the Apple Store’s glass box, I decided to rekindle my childhood NYC memories by taking Daina to FAO Schwarz for the ultimate toy experience.  As background, we stayed at the Plaza near Central Park when we were kids (lucky!), so we basically went to FAO Schwarz everyday to look at the displays and basically be in the middle of magic.  I was a little worried that, just maybe, the experience wouldn’t stack up as an adult.

The place is still massive (the World’s Biggest), and having been open since 1862, it does displays well.  You’ll get your Big nostalgia with Zoltan the fortune teller and the “Big Piano” (which, admittedly, isn’t as impressive as it was in the movie), and are surrounded by toys, toys, TOYS!  There’s also FAO Schweetz on the ground floor, featuring a ton of candy and some awesome looking cupcakes that tasted… pretty good.  The old FAO Schwarz clock hangs next to a make-your-own Muppet station (it’ll run you about a hundred bucks).  Downstairs, you’ll find a host of baby clothes and toys, and a daily story being told at 11 am by one of the “Toy Soldiers” that works there (think Nutcracker or British Royal Guard with emotions), which looked like a blast.  Upstairs is every toy from Barbie to Lego, with some impressive displays to match.  You’ll also get to take your picture with some superheroes, ones which I’ve been told are decidedly less aggressive and more professional than the costumed buskers at Times Square.

If your childhood is a long lost memory and you know you’re dead inside, then this place probably won’t interest you.  If not, definitely worth a drop by.

Once we were done at FAO, we did a walk-through of the Plaza, just to rekindle some of the childhood memories and get a sense of how well my folks must have been doing at the time.  We hadn’t slept that well the night before – we’re taking care of two dogs while we were here, and they were definitely… distressed this morning – so we thought we’d at least get the most user-friendly sight on the NYC CityPass out of the way, the Guggenheim.

Before we get to the Guggenheim, I have to sing some CityPass praises.  If you’re going to NYC for a limited time and want to get the most of it, in terms of sights and dollars, the pass is the way to go.  Around $115 Canadian for access to the Met, MoMA, American Natural History Museum, the Empire State Building (two trips, morning and evening, same day), a choice between the Guggenheim and the Top of the Rock observatory, and one of a few harbour cruise choices.  Definitely worth it. 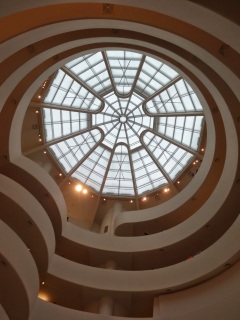 Unlike the Met or MoMA, which have a few rotating exhibits alongside their regular collection, the Guggenheim’s collection is constantly rotating.  This time around, it was the Italian Futurists and some art from Latin America.  The Futurist stuff was neat, but I much preferred the Latin American art, which featured some excellent photography.  There were some neat interactive exhibits as well.  One involved a “Man of the North” contest that was held in Brazil, where locals were asked to send in pictures for a chance to be the official “Man of the North”.  The pictures were blown up onto canvases with the words “Homem do Norte” printed on them.  Some were posted on the wall, but others were arranged on racks at the bottom, and if you thought one deserved to be up more than the other, you could replace it.  Another great exhibit was a postcard gallery featuring shots from Brazil that featured names of other cities and countries in random places.

If you do research on what’s happening in the Guggenheim and the galleries don’t excited you, you should at least check out the building and the lobby.  Designed by Frank Gehry, it’s quite a piece of work.

After getting our art filled, we wandered the Upper East Side looking for something to eat, eventually settling on a place called “3 Guys”, which had your standard…  everything, really.  Nothing wrong with it, not the best food either, but definitely hit the spot.  My stomach was in knots from the day before, but getting a burger in it definitely helped.

Now, I mentioned that we were dog sitting earlier.  As a result, full days out were going to be a rarity, as we had to get back to the island to make sure the dogs didn’t mess their crates.  This basically involves a train or tram ride to the island from wherever we are, staying with the dogs for a bare minimum of 30 minutes while they walk and have some human interaction, and then getting back into the city.  So our first day turned into “What can we do before we have to go take care of the dogs”, which was fine, since we were both exhausted.  We began our walk back to the subway, stopping at the Jewish Museum along the way.  Nice layout, some good art and displays, along with a pretty comprehensive history of Jews in New York and around the world.  There was also a photography exhibit by Mel Bochner titled Strong Words, which featured some neat language progressions displayed in massive size.  We also did a quick stop in Central Park to see the Onassis Reservoir before making our way home.

We walked the dogs, hung out, basically realized we were too damn exhausted to go back into the city, so we settled on one of Roosevelt Island’s food options, the Riverwalk Cafe.  Good pub food, again, nothing spectacular, but exactly what we needed for a first day.

Tomorrow, we’re starting big with the Metropolitan Museum of Art.  Anything after that is gravy.