Built around and named after the Sinaia Monastery, which itself was named after Mount Sinai, Sinaia made for a great end to our run through Transylvania.

The town of about 15000 is smack in the middle of the Bucharest-Brasov route and features great hikes in the warm weather and good skiing in the winter.  People have been using the area as a vacation getaway since the middle ages.  The naming of the town came in 1695, when a Romanian nobleman returned from Mount Sinai and gave the name to his newly founded monastery. 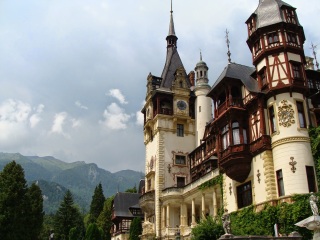 We only made a pair of stops in Sinaia, to the “Big Ticket” sights.  First up was the namesake monastery, filled with beautiful gold mosaics,wooden furniture and religious icons.  It wasn’t the most blow-away monastery in Transylvania, but it’s worth checking out the town namesake. 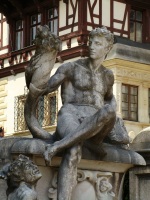 If you’re looking to be blown away, however, Peleș castle fits the bell.  Knowing nothing about it before coming to Romania, it was a nice surprise, especially compared to the overhyped and (somewhat) underdelivering Bran Castle.  Granted, Peleș was built between 1873 and 1914, so construction materials and techniques had probably improved somewhat since the Bran days.  King Carol I, who was responsible for Romania gaining its independence from the Ottoman Empire, built a marvelous palace filled with wood-carved ceilings and enough gilding to drive you nuts!  The grounds are beautiful as well, with various statues popping out of beautiful gardens and meadows.  There’s a less showy castle (Pelișor) not that far away from the main castle, that was built for  King Carol’s wife Marie (who refurbished Bran) and his nephew, Ferdinand.  We didn’t have a chance to take a look, but all reports indicate that it doesn’t stack up to the main castle.  We had to take a tour to walk around, but totally worth it.

As far as things that are “on the road” go, Sinaia is definitely not a stop to be missed!