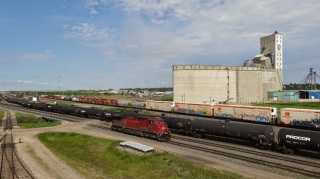 So it’s hard to fill an entire post with an outing within Moose Jaw, and we may not be getting to much of the rest of Saskatchewan due to transport, so consider this post the “Real Time” update of what we’re doing in Moose Jaw.

Walking Off Main Street
During sidewalk days, I didn’t get too much of a chance to wander down any street but the (actual) Main Street of Moose Jaw.  So yesterday, I decided to take an early morning stroll down to the corner of Manitoba and 3rd to check out the bridge that crosses the railway and work my way back to the house.

If you’re in to old buildings that haven’t burned down yet (apparently Moose Jaw has a semi-annual fire bug that moves through the historic downtown), then there’s a lot to see.  Old warehouses, silos, buildings that have retained their edifice but been re-purposed.  The citizens have also done a good job of nicing up the the joint through the “Murals of Moose Jaw”, a variety of murals which represent various historical moments or contributions in the town.  Strolling around is something you could easily do in a day (or less), but it was a cute little small town morning. 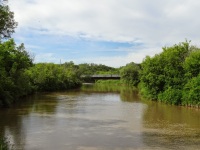 Wakamow Valley
Another cute, serene place is the Wakamow Valley, a huge green space right on the border of town, which has been used as everything from a trading area to hiking trails.  It’s not like you’d need to get away from the hustle and bustle of Moose Jaw (or maybe you would), but if you did, Wakamow is a great little green break.

Except for the bugs. 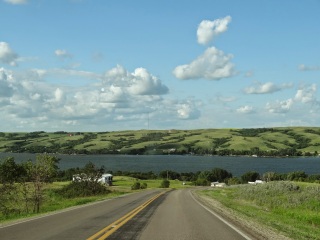 Halfway between Regina and Moose Jaw is Buffalo Pound, which centres around a huge lake.  This was our real “City Break” and, believe it or not, is the “cottage getaway” for citizens of Moose Jaw.  Not sure why one would need a designated cottage in a town so close to the green, but either way, there you go.

We stayed at the “Hodge Podge Lodge”, and of that name sounds familiar, it should – it’s run by Daina’s dad!  Great little cottage on the hills of the lake, a ten minute walk from a beach (or sandbar, depending on your definition of beach).  Very relaxing and I’m assuming the view would be spectacular, were it not for some interference from forest fires in the Northwest Territories.

Yup, smoke from fires in the Northwest Territories made it down to the Moose Jaw region, giving everything a nice haze for a could of days.

Little did I know we’d be in town for not one, but TWO cultural festivals!  Motif reminds me of what you’d get at a Taste of the Danforth or Cabbagetown Festival in Toronto.  Your basic street festival with food tents, a main stage with various acts, and a beer garden area.  Granted, here the beer garden was mostly a rum punch garden run by the Jamaican food tent.  Strong rum lunch, tasty, though probably not worth the $6 they charge per cup.  Also, it’s not run on a street, but in Happy Valley.  The same Happy Valley we saw being pumped of water less than a week earlier.  So the ground in certain areas (the rum garden, especially) had the consistency of almost dried concrete.

Nice festival, though, and a lot more multicultural than what I thought it would be.  I was expecting a Ukranian-Chinese fusion, but instead had the choice of Jamaican, Mexican, Phillipino, Liberian (!), Tanzanian (!!), and the catch-all “Taste of Africa” tent, which was run by actual people of African descent.  So lots of options, all of them pretty tasty!

Anyhow, it’s been a few good days of catching up with people, including Katelyn and Neil, who we met way back in Vietnam five years ago, my buddy Marlon, who I worked with way back in 2002 on The Voyager of the Seas, and a bunch of Daina’s high school friends.  Like, almost too many to count. Again, he’s kind of Harry Potter out here.  Right now, we’re sitting in a McDonald’s at 3:30 in the afternoon, and Daina and I represent the mean and median age, in that everybody else in the place is either 30 years our junior or senior.

McDonald’s.  Hot place to be in Moose Jaw.