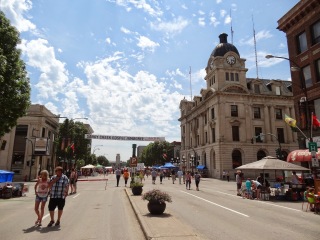 Named either because of its similarity to the Cree words “Moose Gaw”, which means “warm breezes”, or due to the Moose Jaw River which, wait for it, is shaped like a Moose’s Jaw, people started settling here in the mid-nineteenth century.  It’s taken turns being an important railway hub, prohibition booze running hub (more on that in a couple of days), manufacturing hub and NATO pilot training…. hub.
Again, we’ll get into some of the historic stuff to do in town in a future post.
If you’ve ever watched a Michael Bay movie, you’ll notice that pretty much every one has an “Americana” scene.  Something like a kid in overalls running around a tractor in sepia tone while a friend of his flies a kite.  Well, take away the flag (obviously) and you have Sidewalk Days.

Stores empty onto Main Street, wares are displayed, music is played and people are out.  We started the route with kids boxcar racing and indulging in cheesecake-on-a-stick (because what’s a street festival without on-a-stick food), saw a wrestling ring set-up midway (with wrestlers walking around), and wandered by the Moose Jaw Pride table outside the old Capitol theatre.
That’s right, this town actually has an old theatre called “Capitol”.  Though now it’s called the Mae West.
Oh, and small town Canada has Pride, which would have been unheard of 15 or so years ago, when D moved away.
The festival itself isn’t going to blow anybody away, but as street festivals go, it’s cute and gives you a good sense of what Main Street Moose Jaw is all about.  It also gives you a chance to pop into some of the restaurants of Moose Jaw, like Original Joe’s or Browns Social House, both of which are way better than you’d think, with Toronto-pub prices to match.  Plus, planes from the base do a fly by every day at around 5, so that breaks up the boredom over there.
Another neat thing about Moose Jaw is the traffic signals.  Most big cities have a generic robo-voice assisting the visually impaired in getting across the street, or some sort of beep system.  Moose Jaw has this, too except it’s some surly sounding guy that probably did this as a favour for a buddy on city council.  Kind of awesome when comparing it to the ripped-from-Seoul voice of the TTC back home.

There’s a couple of sites in Moose Jaw we probably won’t check out.  The Temple Garden Mineral Spa gets rave reviews from long-time locals, though a lot of the less-time locals complain about diapers and pee.  Also, Moose Jaw Casino, because most casinos are kind of sad.

We will be learning more about Al Capone’s connection to the city (the place is called “Little Chicago”) in a few days and… well, who knows what else?  Posts to come as they come.