From the reactions of the expats, getting out of Bogota is a big deal.

I get it.  The city does have a certain sprawl to it, and driving from Bella Suiza to La Candeleria isn’t a short jaunt.   The city seems to not really stop, just grow, so getting out of it to see things like fields and greenery is a real treat.

That said, not much greenery underground.

We were lucky enough to have Travis and Caity’s friends, Sebastian and Laura,  as a driver today, saving us what looked to be a two-hours-each-way bus ride to our first destination, which would likely have been our only destination if we were on the bus.  Today’s treat was the Zipaquira Salt Cathedral. 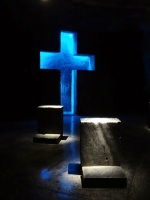 I’ve already seen one Salt Cathedral in my life, the fantastic Wieliczka Salt Mines outside of Krakow, so when I saw signs touting Zipaquira as one of the “Wonders of the World”, I was somewhat skeptical.  They did end up being very impressive in size, though the Stations of the Cross were mostly left up to interpretation as to what rock around what cross meant what.  The guide did a good job explaining it (in Spanish, which was translated by Caity and Travis), but I wasn’t quite up to hearing “this rock represents….” 15 times.  The crosses themselves were very well carved, though, and the main cathedral was absolutely cavernous.  Huge!  Not quite as decorative as the one in Krakow, and I’m not sure it warrants a 2 hour each way public transit ride, but as a quick stop, it was definitely interesting.  This would be one of those “take a tour if you can” trips if you’re in a time crunch. 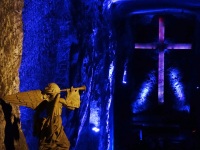 Once you’ve seen the actual Cathedral, there’s a lot of other stuff on offer, including a movie, stores, souvenirs, some kind of concert, restaurants – all underground.  The town of Zipaquira looked pretty nice from a distance as well, so maybe it’s worth taking a day to check out the whole area if you have the time.

That said, we had another area to check out.  More like a farm.