While I admired the pilot’s honesty, telling us five minutes before we land that there was a system failure and we’d be landing at a high speed, and not to worry about any emergency vehicles that we saw, well, that might not have been the calmest way to enter a country.

That said, Beinvenido a Colombia, Kirk!

Airport navigation was nice and easy, so was customs, and my Rosetta Stone Franish (a combination of French and Spanish) got me where I needed to go.  I didn’t make it to the cheaper taxi line, instead opting (in a state of fatigue) for the more expensive van option (though the van guy said the yellow cabs would have cost me 50000 pesos as well) before heading off to the Bella Suiza neighbourhood to visit Travis, can of maple syrup and box of Moosehead at my side.

I think there’s one Moosehead left.

My introduction to Travis’ teacher friends involved a blow dart gun and a styrofoam map, coupled with a drinking game with somewhat loose rules (and honestly, those are the ones that are the most fun!)  Travis had bought the gun in the Amazon a while back, and the whole goal of the game was to gain points by hitting a landmass.  The larger the landmass, the less the points, and if you could hit an island on the equator (can a geography major check if one exists, please?), then the other team has to finish all of their drinks.

So basically, after being up since 4 am that morning and landing in one of the highest capitals in the world, I was drinking.  Maybe not the smartest idea, but a fun one.

The plan was to go out, and the club of choice seemed to be Baum (as in BOW-wow , followed by “mmmmm”).  This was spearheaded by a friend of Travis’ who happened to be the most Colombian (as in half) and the most drunk (as in totally).  She claimed she had a friend working their that night and, after a fun cab ride with Travis and his friend Caity, we were at Baum…

….where our Colombian leader’s friend wasn’t working that night.  After briefly debating (as in not even debating) a 40000 peso per person cover (about $20 a head, apparently steep by Colombian standards), and with Colombiana trying desperately to convince us to go to Radio Berlin (Rrrraadeeeo  Behrlinnn!), we ended up at a place called Latorra.

Latorra was fun, if not a bit divey, with multiple rooms and a DJ playing techno house music in one of them, accompanied by strobe lights.  Part of the club was open air, and it had some treacherous stairs.  The next morning, we found out that those stairs ended up being the demise of our Fearless Colombian Leader, who disappeared from our story after apparently tumbling down the entire flight, breaking her nose in the process.

Don’t worry, apparently it was set back into place by a random medical student at the bar.

As Travis had taken to saying “This is Bogota!”

We stayed out until about three and had a good time.  A couple of locals came up to me to try and practice their English, and we met Arthuro and Arthurito, who become important to the trip in a couple of days.  Also, there was a vintage video game cabinet featuring some kind of international version of Final Fight where the only move I could do was my special, but it didn’t cost me any energy.  I’m a nerd, so that excited me.  After getting out, eating some street food (deep fried dough ball with meat and eggs), Travis negotiated a not-crazy-expensive cab and I was crashed out on the couch.

Brunch was actually a potato and bone-in-beef soup in the Usaquen district of Bogota.  Usaquen was actually annexed by Bogota in the 1950s and kind of stands apart from the main city, with nice walking streets, neat little cafes and some great restaurants.  The soup hit the spot and, a specialty coffee from a wooden truck later, our day was ready to begin!

Original plan was to actually get out of the city on Saturday and see La Candeleria, Bogota’s historical district, on Sunday, when bikes take over the downtown and driving is limited.  Unfortunately, Sunday happened to be an election day, which means that most things shut down, including the museums we wanted to see, and the bike-only day would be cancelled.  So, downtown Bogota, first!

If I could pick one thing that differentiates Bogota’s main tourist area from that of the other South American capitals I’ve been to, it’s a general sense of cleanliness and order.  That said, those in the know told me to just keep an eye out on my stuff, as there are some pickpockets around and robberies do sometimes still happen.  Our first stop was to be the Gold Museum, but it looked like storm clouds were coming in from a distance, so we changed our path to Bolivar Plaza, Bogota’s main square.  Along the way we sampled some free capybara, gambled on some guinea pig races (if the pig goes in a designated house, you win the money!), and I ate a churro from Superchurro, a neat comic-book themed churro stand with comics saying things like “My true love is a churro.  Because Bogota.

The square itself was pretty huge and impressive, even by South American standards, featuring the National Capitol (home of Colombia’s congress), the Palace of Justice, the Lievano (where the mayor works) and the Primary Cathedral of Bogota.

The Botero Museum was our next stop, which involved a pleasant little stroll uphill through La Candeleria and all of its old Spanish colonial and baroque buildings, along with a stop at a French cafe for some kind of almond pastry (AMAZING) and coffee.

Although the Gold Museum was on the top of my “Must See Museum” list, I thought the Botero had it beat.  There were some great pieces from artists like Chagall, Dali and Picasso, and Botero’s art was in full display.  For those who don’t know (I didn’t before I came to Colombia), Botero is the guy who is famous for painting and sculpting figures as super round, almost to the point of comically obese.  There was a Botero-style Mona Lisa, cat, bird, general…  Lots of subjects to get the Botero treatment, as well as some still-lifes of (wait for it) food!  Plus, the price was right at FREE 99! 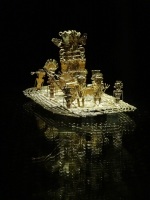 We started walking towards the Gold Museum, with a quick stop for what I can best describe as a cheese and jam pizza between two thin wafers (I was told the name, but have quickly forgotten).  Very yummy.  Then, GOLD!

El Museo del Oro houses Colombia’s largest collection of gold and is pretty much what you’d expect from a museum housing the country’s largest collection of gold.  Lots of gold.  A few neat pieces, like a gold-covered conch, some ceremonial pieces, and a 12-inch funerary cod piece (want), though it could get a bit repetitive at times.  Fortunately, breaking up the repetition was a little gold room, which was meant to recreate an ancient ceremony of throwing gold into the river.  Neat lights and glowing gold.  Definitely worth the trip, though not as blow-away as I had been led to believe.  Maybe I’ve just seen better gold.

Travis and I then continued solo to Monserrate, Bogota’s famous church WAY up on a hill.  Ordinarily, it’s a cable car ride up, a funicular down, though today only the funicular was running.  Unfortunately, the clouds we saw earlier were coming down, effectively covering the hill and the church in a white mist.  It actually provided a neat, otherworldly feel to the place, though you had to watch your step.  As a result, though, we did miss what is supposed to be a spectacular panorama of Bogota, but such is weather.  The stations of the cross were on display leading up to the church, and I could see how it would make a great pilgrimage experience in any weather.

After dodging an unofficial cab (asking us for double the price and with no meter or fare card, bad sign), Travis and I made it back to his place for a quick rest stop.  Last stop for the night was El Biferia for dinner with Travis, Caity, and Sebastian and Laura, a couple who were nice enough to be our drivers the next day.  After steak-without-wine, I ended up crashing pretty hard for the night.

24 hours of travel, a hangover, and a long day in the sun did not equal going out again.  Plus, with the election, Bogota was dry.  No booze until voting was done.

Overall, it was a pretty good day, a great intro to the basic sights of Bogota and a bit of its nightlife.  As South American capitals go, I’ve been in worse, and you could do worse than spending a day in Bogota checking out its sights.

Just try not to get loaded drunk the moment you get off the plane.  Altitude.