If there was one thing I wasn’t a huge fan of in Turkey, it was breakfast.  It was never bad, but I couldn’t really get into the whole tomato and cucumber thing.  Or random cheese and lunch meat which I guess you were supposed to make a sandwich with.  Or hot dogs cut into little stars.  So I was flipping thrilled this morning when breakfast included eggs, a waffle bar, cappuccino, no vegetables and fruit salad.  Plus, sausage that wasn’t overcooked and cut funny.

So, fueled up and ready to go, I made my way to the first stop of the day, the castle of Monteriggioni.

Now, I would probably have never ended up here if it weren’t for Assassin’s Creed.  In the game, Monteriggioni was Ezio’s headquarters.  As you gained money and experience in the game, you could renovate the villa in the middle and fix up parts of the town.  Well, the castle was pretty small, but I have no idea how I missed the ruins of the villa, which was destroyed when Cesare Borgia led an assault on the town.  In fact, the signs in the village got history wrong, saying it was the Florentines that destroyed the town, and that it happened after the death of Pope Alexander VI, which can’t be true, because Ezio didn’t kill him until near the end of the game.  Well, actually, Cesare did, but you get the point.

Seriously, though, the castle and “town” within were definitely smaller than I though, but it was still a quaint little visit.  I got to climb the castle walls, eat some good, cheap gelato and take a silly picture of me trying to hide in a well.  So, no complaints.

After finding the Monteriggioni Scuole bus stop, I was off to stop two, which was the “Medieval Manhattan”, San Gimignano.

Due to its location on a prominent trade route, San Gimignano was a rich little city back in the day, and the wealthy locals decided to show just how rich they were by building towers.  Originally, there were 72.  Now, there are only 15.  The same plague that wiped out most of Siena hit San Gimignano as well and it, too, fell under Florentine control. 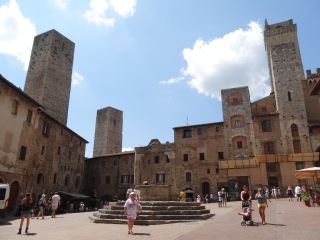 The towers are definitely impressive and the view from the top of the Torre Grossa were great.  As I looked at my watch, and then the bus schedule, I had to make a bit of a choice.  See, there was a bus leaving for Siena in about 20 minutes, which I could catch in order to get back to Siena to see the museum in Santa Maria della Scalla.  Or, I could stay in San Gimignano and see… I didn’t know at the time, actually.  I hadn’t read too much up on the town, so it turns out I ended up missing some nice frescoes in a church I walked right by.

However, having just googled the pics for the frescoes, I have no regrets.

Santa Maria della Scalla is an old hospital which has been converted into a museum, and it’s a great one.  There are some amazing frescoes as well, great signage and displays that explain how the building was used as a hospital, and a fantastically laid out archeological museum and Holy relics room.  The highlight today, though, was the display of Steve McCurry’s photography.

For those of you who don’t know, McCurry is one of the world’s best photographers and the man who took the famous “Afghan Girl” picture for National Geographic.  Walking through the display in the cavernous basement, as it was mixed in with ancient archeological finds, was truly moving.

So, I’m cool with having gotten out of San Gimignano a bit early.

So, overall, good day.  I got to check out two AC sites, both of which were darn nice, and saw a fantastic museum as well.  Plus, real breakfast.

Tomorrow morning, up early, making good on my Trevi Fountain investment from 2005.