The one thing I’ll remember most about the city of Trabzon is that “Now You See Me” benefitted from an interesting premise and a release date that allowed it to gain some kind of hype because there was nothing better in theatres.  Ultimately, though, it was a pretty crap movie.

Lonely Planet states that Trabzon “is one of those ‘love it or hate it’ places.”  I’d term it more as “love it or leave it as, had I known how uneventful today was going to be, I probably would have jumped the night bus to Kars yesterday.

It’s not that it’s a bad city, or that it’s even that dull.  I guess I just had the misfortune of being here on a Monday, when the museum was closed, and considering I had seen the Ayasofya and the Sumela Monastery the day before, there wasn’t much else to do. 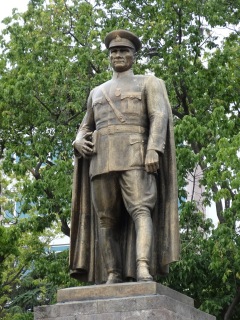 I did take a stroll through the old bazaar early in the day, which was relatively packed and completely unlike the Grand Bazaar in Istanbul, in that locals were selling to locals.  I saw a statue of Ataturk that made him look exactly like M. Bison from the Street Fighter games, cape and all, and went up to the Boztepe Picnic Place to get a view of the city and the Black Sea, which wasn’t as impressive as I had hoped it would be.

Did manage to finally ring Daina and my grandmother on Skype, figured out where I’m supposed to meet my bus for Ani, and bought some nice T-shirts from “Colin’s”, a store we don’t have at home but should.  Also had some spicier-than-usual adana kebab.  So that was nice.

And, to kill time, I went to see a movie.  Ideally, it would have been “The Wolverine”, but that one was actually dubbed in Turkish.  I was slightly surprised, having seen “Inception” in Poland and “The Dark Knight Rises” in Korea, but I suppose the former doesn’t have the economic power and population base to justify a dub, and the latter would rather hear it in English to practice.

Anyway, the movie blew and everytime I thought it was starting to get better, it didn’t.  So not impressed.  Kind of the assessment of the day.  Even had Burger King for dinner.

About an hour to kill before the night bus to Kars, where I’ll be staying for one night before heading back to Istanbul to round the turkey leg out.