I’ve been ruined by these ruins!

Okay, bad joke, but an accurate reflection of how I’m feeling right now.

Bergama was originally Pergamum (Pergamon) and began its rise and falls when Lysimachus took control of the place after Alexander the Great died.  Its major rise came under Eumenes in the 2nd Century BC, who created the second greatest library in the world (behind Alexandria and in front of, you may remember, Ephesus and built the amazing Altar of Zeus, which I had the good fortune of seeing and drooling over on a trip to Berlin in the – wait for it – Pergamon Museum.  Things fell apart a bit after that and it became a part of Rome. 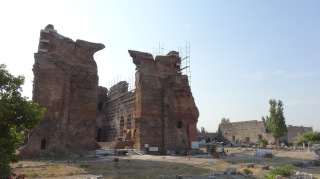 There are three big things to see in Bergama.  The first one I had the pleasure of almost seeing was the Red Basilica, which was originally a temple for Isis and several other Egyptian gods.  The thing is massive, though it’s definitely been in better shape, and repair crews are currently working on it to shore it up.  All you really see are two walls and a turret that doubles as a mosque, but the size of the thing is just insane and the bombed out quality adds to the visual.

Little known fact – this was supposed to be one of the Churches of the Apocalypse, where Satan would have a seat.  I’d like to think that, if that did happen, he’d pick a more major centre.

Next up was the Acropolis and the question of cable car vs hill.  See, the Acropolis is a pretty far walk uphill and, at nine in the morning, it was already getting massively hot.  I had given myself the full day to get around Bergama on foot, but I don’t think I wanted to start my day a sweaty mess.  So, cable car.

Honestly, it must be down season in Bergama because it was DEAD and I was one of maybe twenty people in the whole site, reminding me of the time I had Carthage all to myself.  I’m guessing the place must get enough visitors to justify cable car money, but nobody here today.

Better for me, I think!

I already went into some of the big ticket items that the Acropolis used to have, but it still strikes a fine figure without them.  A massive stadium is cut into the side of the hill, the Temple of Trajan makes for a fine backdrop and a good spread of ruins as you go down the hill.

Now, once I got to the bottom of the hill, it became obvious that I couldn’t find an exit.  Aside from the hole in the fence.

Yup, actual hole in a fence.

Still not wanting to go up that hill, hole in the fence it was.

Brief pit stop back at the hostel to refill on water and return my key (oops) and I was off to the last archeological site, the Asclepion.

Home of Galen (not Weston), who is considered early history’s greatest doctor and the father of pharmacology, the Asclepion was considered the cutting edge in ancient medicine, with cures and treatments ranging from enemas to sunbathing to herbs and ointments.  Diagnosis, however, was done after “incubating” patients in a room and analysing their dreams.  I like MRIs better.

A quick stop at the Archaeological Museum later and I was back at the hostel, waiting for a nighttime bus to Istanbul.

Now, Daina would crack that I’ve spent too much time at ruins.  Well, I’m definitely glad I made it to Bergama, because it may have been the best one of the trip.  However, it will also be the last set of Greek or Roman ruins from here on out.  There’ll be an old, ruined Armenian capital coming up, but that’s later on.

Still, no matter how many of these things I traipse through, they don’t fail to amaze me.