So we started the day at about 2:50 am, when the alarm we set for D went off, allowing him to get to the airport on time.  I didn’t really get a good sleep before the alarm and, after, I was up.  Still am.  Still, ferry tickets were bought, itinerary was set, off to the next destination.

I’m really in Canakkale for one thing – the ruins of Troy.  Wasn’t going to chance getting to them today, saving that for tomorrow.  Getting here was enough of a challenge.

Okay, so the Lonely Planet and several other websites have noted that taking a bus from Istanbul to Canakkale is a bad idea, since it takes a while to get out to Istanbul’s bus station and it’s a six hour drive.  The better option, they say, was to take the ferry from the Yenikapi port (a twenty minute walk from our hotel in Sultanahamet) to Bandirma, on the other side of the Dardanelles, and then get a bus to Canakkale.

The ferry ride went off without a hitch, but once we got off, we were looking for the “shuttle” that was supposed to take us to the bus station.  I could not see or find such a shuttle, but did find a local bus with the words “otogar”, so figured I’d get that.  After all, the Lonely Planet said the otogar was just two kilometres from the ferry port, just off the highway.

They need to measure that again.

The local bus took a LONG time to go those two kilometres, including a run through and around a dusty industrial area.  After what seemed like forever, the bus finally pulled into the bus station and I was on a bus to Canakkale.

Back to the bus, which would be taking me to the otogar in Canakkale….

…after dropping me off at the Autobus Termini outside of town, after which I had to transfer to a shuttle.

Fortunately, the shuttle did go all the way to the harbor.  By the time I got to the hotel, my combined travel time was…. just about six hours.

So I probably saved a half hour by not going to the Istanbul bus terminal.  Great stuff, that.

The GREAT news, though, is that as soon as I got to my hotel, I was UPGRADED to one of their nicer properties!  King bed, nice shower, hair dryer (maybe I’ll use it, just because) and furniture. 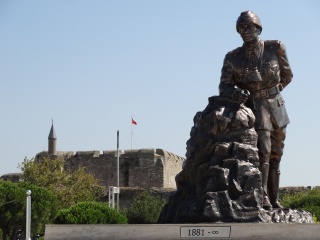 Canakkale is the gateway to two major sites.  Troy was the one I’ve already mentioned, and the Gallipoli Peninsula is the other one.  As much as I’m sure the WWI history is interesting, I’m honestly not that interested, so I’ll be skipping the later.  Canakkale itself is nice, small, and has the Trojan Horse form the movie “Spaceballs”.  Or “Troy.”  There’s also a military museum, closed today, but with a neat set of grounds to walk around.

That’s about all I saw.

So, if tomorrow works as planned, I’ll be headed to Troy in the morning, back to Canakkale for lunch, then to Bergama for the afternoon.  Let you know how that works out!