Yes, there IS an Olympos in Turkey.  They think it actually means “High Mountain” in Anatolian.  We’ll get to that in a moment.

First off, medical update.  We are a couple of hurting units.  Daina’s still got the “rumble belly” from the trip out east.  I’ve got a nice little head cold which takes turns flooring me and not bothering me at all.   So, wonderful times from a health standpoint.  Nothing that jeopardizes the trip, mind you, we just might have to use some of that buffer zone we built at the end for recovery time in the middle.  We’ll see as we go along.

Today started with a cab ride from the Dantel Pansion in Antalya (cute place) to the otogar, where we encountered another Turkish cab driver who was trying to separate us from our money.  This time, he offered to take us to Olympos for 70 Euro, saying that it would add up to the same when we used all the dolmus we needed to get there.  I pretty much called bullshit on him – a private airport transfer from Sabiha Gocken costs 60 Euro, no way an hour and a half to Olympos on shared bussing cost more than that.  Ideally, we’d be paying 5 lira total to get to the otogar, but with both of us being sick, that wasn’t an option.

Within minutes of getting out of the cab, we were in a dolmus on the way to Olympos.

Gotta say, Turks – turn on the air conditioning!  The people driving you around, be it bus or cab or dolmus or whatever, are pretty hesitant to turn it on for the people in the back.  I get that you don’t want to burn out a motor when going uphill, but seriously, just give it a little push every now and again.

We were let off at a roadside café, where we’d be catching the next vehicle to Olympos proper.  Cost of two tickets from Olympos?  24 lira.

We wait about half an hour, in which time I have some AMAZING fresh squeezed orange juice mixed with pomegranate, and then we get on another dolmus.  This guy had some steep, windy roads to go down and a family of dumb people in a Pontiac ahead of us for some of the way.  End cost of that trip?  4 lira.

Anyway, you can’t call Olympos a town.  It’s more a string of hostels, pensions and travel agencies, plus a couple of restaurants, all spread along a somewhat cramped dirt road to allow people access to the Olympos ruins which, from the signage, began being excavated around 2000.  People had known they were there before, and the site itself had been in use since the 2nd century BC.  You just can’t really call what surrounds it a town.

We made our way into the pension and crashed.  Both of us were hurting pretty bad, but I wasn’t nodding off like Daina was, so I decided to make my way out to the Olympos site itself, knowing it was the only beach in town and we’d be hitting it tomorrow anyway. 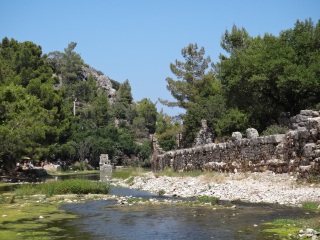 As I said earlier, you can’t call the Olympos where we’re staying a town.  You CAN call the Olympos site amazing!  I’m drawing a bit of a parallel to Angkor Wat, in that the vines and foliage still covers most of the ruins and, in fact, most of it still lies in ruins.  In spite of the loads of tourists that are there, a sense of discovery still exists as you make your way around the site.  There’s an old Roman temple gate, a theatre, baths, and walls that appear to be getting the reconstruction treatment.  Not the most amazing Roman ruins I’ve ever seen, but the setting more than makes up for it. 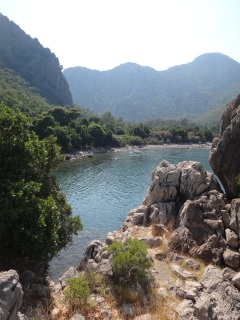 The beach at Olympos, though, is where the magic is.  The one drawback is that it is a pebble beach a la Nice or Yalta, but the backdrop is absolutely stunning.  A freshwater stream that runs into the sea.  Mountains on either side of the stream.  Old fortifications hugging the sides of the mountains.  Just an absolutely amazing place.

I did some time in the ocean and then crossed the stream to the other side to find some of the lesser visited ruins.  Snapped some shots, had maybe the BEST cherry ice cream ever on the way back, and now I’m recovering in air conditioned goodness with a shoddy internet connection.

So, overall, not the best day, especially not for Daina, but stuff was seen.  So that was good.

Tomorrow… Well, we’ll see.  We may have to tack a day on here depending on how Daina is feeling.  Ideally, we’d both go to the beach and then visit the Chimera flames at night.

Ideally, neither of us would be sick on vacation.

What can you do?