What a beautiful old town! 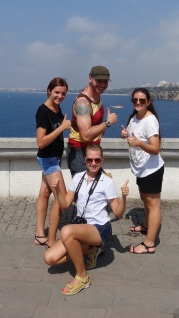 I’m purposely using the term “old town” because we never really left it to see modern Antalya.  I’m totally okay with that..  Apparently, according to the Wikipedia, Antalya is the world’s fourth most visited city by international arrivals, though most of that was a result of people switching planes or moving from the airport or cruise lines.

It’s interesting, because the old town of Antalya seems really quiet.  Not untouristed – the touts have their lines ready, stores are selling crap and, for the first time in Turkey that I’ve noticed, prices seem to be listed in Euros just as much as Lira.  Maybe it’s Ramadan, but it just seemed super quiet today.

Which was good, because we needed a quiet, chill day.

We started our day walking along the water near the Hidirlik Tower, an old lighthouse that has a nice position on the cliffs of Antalya.  It was there where three girls came up to me and one of them asked “Why do you have Ukraine on your arm?”  They were referring to the tattoo on my right shoulder.  I explained that my family was half-Ukrainian, and they said they were visiting FROM Ukraine!  They were pretty excited by the tattoo and asked if they could have a photo with me.  I agreed, making sure I got one with my camera as well.  So the day was off to a fun start.

We wandered through the nearby park and then up one of the main streets, passing by one of the prettiest Starbucks I’ve ever seen.  It was then that we discovered something Antalya does very well – good quality, cheap clothes! 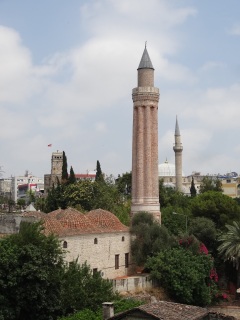 There were lots of stores on the side of the street offering up legit sales, and Daina and I went a bit more nuts than we should have.  I ended up picking up a pair of shorts and three t-shirts, and Daina got WAY more than that.  Ducking in and out of stores was a good way to beat the heat, and it also expanded the wardrobe, so win-win!

We wandered back into the old town and through Hadrian’s Gate, constructed by (you guessed it!) Hadrian about two thousand years ago.  As I was walking along the gate to get a picture, I felt glass shatter under my sandal.  Some older gentlemen were having tea in the park and, for whatever reason, one of them left his tea cup about fifteen feet from where he was sitting.  I apologized, took my picture, and was then told by the man that I had to pay 3 lira for the cup.  I disagreed, asking “Why was the cup there in the first place”.  He actually “negotiated” down to a lira and, since I did feel bad about stepping on the cup, I gave it to him.  Not a big deal.

We wandered in and out of stores and the sights of the old town, which included a fluted minaret, an old clock tower, remnants of the city walls, an old Roman harbour and a broken minaret.  Very picturesque area that would be a lot more chill if it weren’t for the attempts to sell you things.  I guess the tourism lull made the people hocking their wares a bit more desperate.

After a brief break back at the pension, we donned our swim trunks and went down to Mermerli Beach, a private beach located just on the other side of the Roman harbour.  Beautiful little spot, great for an afternoon of getting rid of a farmer’s tan.

Just came back from dinner where we had “manti”, which is Turkish ravioli.  Not sure if it was supposed to be as greasy as what we ate, and our stomachs are both a bit rumbly right now, but nothing we won’t be over by tomorrow.

Speaking of tomorrow, we’re sticking with beach but changing location.  Off to Olympos!