There was an attempt to sleep in this morning.  An attempt that was FOILED by some rude, LOUD girls who had to wake up at 4am for a balloon tour, were rude and loud, and then returned two and a half hours later, still being rude and loud.

So, no sleep in.  However, we did still start the day later than usual and got some important stuff done as well.

First off, ticket has been bought for our next stop, as we hit the coast at Antalya.

Second, Daina got stamps.  So, postcards.

Third, off to the underground city of Derinkuyu!

The caves that make up the underground cities in Cappadocia have been lived in and carved out from as far back as 400 BC, with their heaviest use coming in the 6th and 7th centuries, when Christians in the Byzantine empire used the caves as hiding spaces from Persians and Arabs.  The deepest go down over a hundred meters and while cities like Derinkuyu may have housed over 10000 people at its peak, nobody knows for sure how many of these cities there are or how big some of them may be. 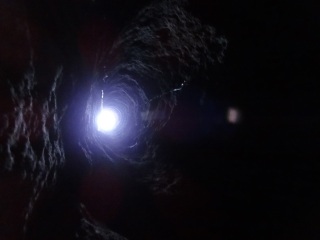 To get to Derinkuyu, we had to first get to Nevsehir by dolmus.  Along the way, we met a nice couple from Seattle, Adam and Cinnie.  Once we were dropped in Nevsehir, a cab driver approached us and asked us if we wanted a ride to Derinkuyu for 40 lira.  It would be double, per person, of what we’d spend to get there, but it would also get us there in about half the time, so we went along with it and were on our way.

Big line to get in, big crowds going down, MASSIVE claustrophobia for those who might suffer from that kind of thing.  The tunnels are short, the rooms get cramped with tourists, the stairs are steep and it’s a lot of exercise to actually get around inside.  Lots of ducking, squatting and near crawling.  Still, definitely worth seeing, just for the scale of it, and to be down about a 100 metres and look up an air shaft and see daylight.

We headed back to our cab driver, who then started to get a bit weird.  He offered to take us all the way to Goreme for an extra 30 lira, as opposed to the 10 lira the four of us would pay through a dolmus.  He said the next dolmus wouldn’t leave until 1 pm, which I was pretty sure was a lie, since the schedule and the Lonely Planet had them going from Goreme every 30 minutes.  The next option presented was to drop us off at Uchisar for a bit and then take us back to Goreme, for even more lira.  Again, we said no.  He backed off, but it was a weird, awkward upsell.

In an even odder moment, as we were getting closer to the dolmus stop, a series of pylons led us down an alley.  We all kind of chuckled as we went down the decrepit looking thing, and then had a better laugh as a kid playing with a toy gun in a playground turned and started “shooting” at our cab.

Kind of a like a scene from The Kingdom or Zero Dark Thirty, except cute and weird.

We got off at the dolmus stop and, sure enough, next dolmus was along in less than 15 minutes.

Sucks when cabbies try to play you.  It hasn’t happened much here, but it puts you on your toes.

We said our byes to the Americans and headed back for lunch at Nazar Borek.  Daina decided to go back to the hostel, but I wanted to make one more stop at the Uchisar castle!

The castle is basically a fairy chimney on steroids, a giant rock that has been carved into a strategic structure that dominates the Goreme skyline.  The dolmus dropped me off on a random road with a sign, not the tourist market I had seen before, but that actually ended up being a good thing, as the tourist market doesn’t give you an easy way up to the top.  Great views, fantastic structure.

Now, even though it would be rough getting up to the castle from the tourist market, doesn’t mean that you can’t go down.  I found a path off of the parking lot at the top of the hill and, looking down at the various paths, was able to snap some amazing shots and get some good views of the castle.  Then, into the market, onto the dolmus, back to the pension.

Not sure if Goreme gets a 5-Day city designation.  The city itself gets done in about two, with the Open Air Museum and the balloon ride.  However, with all the activities you can do, plus all the various valleys and small towns to visit, I might come up with a new designation.

Let’s call Goreme an “Adventure Centre”.  Considering that there is still stuff I could do and see tomorrow if I wanted, it seems apt!

Tomorrow, TRANSIT DAY to Antalya.  Then, some beaches!  Can’t wait to even this tan out!