We took our sweet time getting up today, enjoying our very hotel-like hotel.  It was a Radisson Blu, actually, as I figured it would be nice to treat ourselves for a stop in Ankara and, to be honest, most of the TripAdvisor reviews I read of Ankara hotels had the phrase “frequented by prostitutes” in the body, so we went a bit high end.  Considering the Genclik Park across the street had a big Luna Park with a ferris wheel and various midway rides, figured the Raddy was a good bet.

We got to the bus station at about ten.  Unfortunately, that was just a bit too late to catch the eleven o’clock bus, so we ended up staying at the Ankara bus station until our bus left at one.  Nothing fancy to see here, aside from traditional squat toilets, which is a tradition I think the world needs to get rid of.  Ironically, the only “normal” toilet was in the handicapped stall and, unlike in Canada, Turks actually avoid that stall, presumably just in case a person who needs it comes into the bathroom.  Daina made no such allowance when he had to go, so good for him. 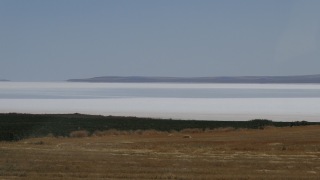 The bus drive to Goreme was visually uneventful, save for Tuz Golu,a giant salt lake that was on our right for an hour or so.  Once we actually got closer to Neveshir, where we transferred to a shuttle to Goreme, things got more interesting, with crazy rock formations popping up along the way.  More pictures of those later.

We’re staying in a cave right now.  With wifi.  So that’s neat.  Goreme proper is a pretty small town and it’s definitely the first “Tourist Built” town we’ve been to, as it’s pretty obvious who’s local and who isn’t when you’re walking down the street.  We had a FANTASTIC dinner, my favourite of the trip, at a place called Nasar Borek, where I had a pastry filled with meat and spices that I could dip in yogurt and tomato sauce, followed by a chocolate crepe (gomlecz?).  Very satisfying after a five hour bus ride.

Tomorrow, we hike a couple of valleys and start doing the touristy trekking stuff.  If first impressions are any indication, should be amazing!