First thing first, though not the first thing that happened today, I GOT MY LUGGAGE!  Walked into the hotel lobby, the bag was sitting right there, waiting to go!

So today being Monday, our options were limited a bit (but only a bit), since most museums are closed, including the Hagia Sofia.  Still, Istanbul certainly isn’t without things to do so, after a hearty breakfast at the hotel, we were off and running!

Good news for those not interested in heat (i.e. Daina), Istanbul was floating around 21 degrees today.  So that made the wearing of pants (necessary for access to the best mosques and the Holy relic room at Topkapi) much easier as the day went on.

First stop involved the aforementioned pants.  After checking out the outside of the Blue Mosque yesterday, we decided it would be time to take a look inside.  Built in the 1600s and covered in blue tiles inside (hence the name), the mosque is one of those “can’t get a bad angle” type buildings, and that goes for most of the inside as well.

I’m also going to give Muslims some big cleanliness credits here.  Not only did they give you unused plastic bags to put your shoes in, but it seemed like they were constantly vacuuming whenever prayers weren’t happening.  Seems like a prime candidate for a Roomba, although I’m sure that would pose its own problems.

After Daina took his pants off (with shorts underneath), we were on to our next destination, the Topkapi Palace!

Mehmet the Conqueror began construction on the palace shortly after, well, conquering Istanbul in 1453.  It grew and grew until the 19th century, when everybody moved out to live in newer, more European palaces.  For the life of my, I can’t see why, since the whole palace is pretty magical.  Four huge courtyards, a harem (!), views of both sides of the Bosporus and the Golden Horn, insane amounts of marble and gold, and treasures that include a dagger with an emerald hilt and, I don’t know, MOSES’ STAFF!!!

Okay, I don’t know if Moses’ staff was actually Moses’ staff – it’s hard to tell with religious relics.  The way I like to think of it is that if enough people think it’s real, then it must at least be somewhat important, so it’s kind of neat to see things like Mohammed’s swords, a footprint he left, and the golden container that once held part of the Kabbah. 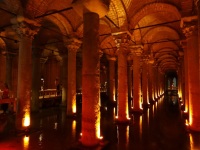 The skies started to open just a bit as we were walking around, so we headed to the place where we might have water falling on our head, but it wouldn’t be rain.  No, next up on the cavalcade of “That’s Amazing” were the Basilica Cisterns!  Built in 523 to provide water to the Byzantine palaces and rediscovered hundreds of years later when locals started pulling up fish from their floorboards, you’re looking at a massive underground room with huge Roman-style columns holding everything up.  Even though most of the columns are the same, save a couple of Medusa columns and a few others, the visual is original enough that you don’t find it repetitive.  Great way to get out of the rain! 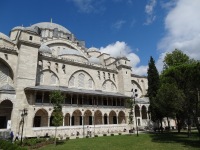 After a bite to eat in the park, it was a mix of bazaars and mosques, as we made our way into the craziness of the Grand Bazaar before have a tea at that Beyazit mosque and making our way to the Suleiman Mosque.  It’s argued to be the better mosque over the Blue Mosque and I’ll agree with that only in regards to the courtyard being a bit nicer, but the Blue has it beat in regards to interior and look.  We then wandered down to the Spice Bazaar, where Daina asked to indulge in some pide (Turkish pizza) and honey balls.  It cost us a grand total of 9 lira, about 5 and change, for the delicious snacks.  After wandering through the Bazaar, we found ourselves exiting near the “New Mosque” which, in Istanbul, counts as new because it’s only a few hundred years old.  Still counts! 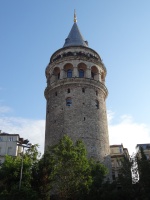 STILL MORE STUFF!!!  We were definitely making the most of this day!  From the New Mosque, I could see the Galata Tower, which meant my inner-nerd (or just “nerd”) took over.  The Galata Tower was the headquarters for the Order of the Assassins in Assassin’s Creed: Revelations, and the subject of my last Bitstrip.  So, we were going up!

Getting there meant crossing the Galata Bridge, which gave us some great views of Istanbul, and climbing a bit of a hill, and then waiting in a fairly sizeable line to get to the top via elevator.  There was no stair option, otherwise, I’m sure we would have taken it.

The views were amazing.  The crowd on the top…  Well, between one family in front of us stopping for portraits literally every five steps to another behind us trying to shove by, I kind of wished I was playing AC a few times, as I’m pretty sure I would have earned some good points.  However, these people were civilians and, as the game reminds you, Ezio didn’t kill civilians, so neither could I.

We toyed with the idea of checking out Taksim Square, but it was getting a bit late and that’s when the trouble in Taksim usually starts, so we doubled back, stopping at “Bambi Café” for some doner and a “luxburger” before taking some fantastic shots of the Hagia Sofia and Blue Mosque all lit up.

In most cities, we could easily say we’re done.  However, considering we have yet to get inside the Hagia Sofia, our museums have been untouched, and there’s still a Bosporus cruise to do, I can safely say that we’re not done quite yet.  Nor will we likely be done tomorrow, and possibly not the next day.