There are a few “hub” cities in Transylvania which you’ll need to crash in if you’re touring around the region.  As a former “Capital of Culture” in Europe (real title, 2007), you could definitely do worse than Sibiu.

Sibiu has been one of the most important cities in the region since its inception, but doesn’t get the traffic of cities like Brasov and Sighisoara (we’ll be there later).  It served as the regional capital while the Austrian Habsburgs controlled the area and its roots go back to the 12th century, when it was build over the site of an old Roman village.

The most visually striking elements of the city are….

Okay, it sounds more ominous that it actually is.  They “eyes” refer to the little curved windows, prevalent on almost every roof.  Apparently, behind them, are ridiculously tall attics.  They make for a neat little visual and consistently pepper the top of the city. 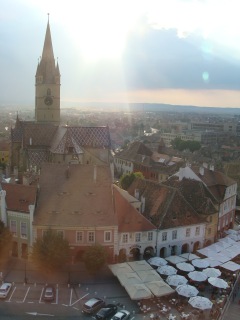 Sibiu has its two main squares, the Piata Mare (Main Square) and the Piata Mica (Small Square).  Going up the old Turnul Sfatului (Council Tower) is a nice, cheap way to get a good view of both from on high.  There’s a fantastic Gothic-style Evangelical Church that houses the tomb of Vlad the Impaler’s son, Prince Mihnea the Bad, as well as some displays on a variety of religions.  At the time, there was a gigantic, inflatable reclining Buddha, which was probably the last thing I expected to find in Romania.

The lower town of Sibiu is located underneath a beautiful, 200 year old iron bridge (known as the Iron Bridge).  It’s not like the main part of the city has any major hustle and bustle, but going to the lower town really does take you away from the rest of it.

As beautiful as Sibiu was, the highlight was actually dinner.  We ended up at a restaurant with no windows.  However, it was located in a beautiful, golden-lit, brick-walled cellar.  The great prices totally mislead me on portion size, as I ordered a polenta that was covered in bacon and cheese which, unbeknownst to me, was meant to be shared by more than one person.  I enjoyed the food coma that came after.

I feel I should be writing more about Sibiu, or that I’m not doing it the justice it deserves.  Truthfully, we probably didn’t do it the justice it deserves, as we spent a matter of hours here as opposed to an entire day.  I don’t thin you’d need much more than that to get a decent sense of the place.  We got there after most museums were closed, in time for a great evening stroll and a nice sunset.  Give yourself the time to enjoy it, it’s a beautiful little city.