When you’re done with the biggest, why not go to the second biggest?

Plovdiv, the second largest city in Bulgaria, is  one of the nicest. Built on the site of Philippopolis (sp?), named after Alexander the Great’s dad, this town is full of neat little cafes, alleys and a ton of old buildings – churches, wood houses, you name it. 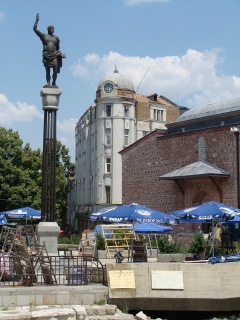 The first day of Plovdiv was a little bit scary.  It started off tame enough.  We wandered around some of the simpler Roman ruins in the town, made our way up the main street to the main mosque and strolled up one of the many hills of the town to check out some of the churches.  We were hastled by some stray cats, including maybe the smallest, sickest, cutest looking kitten who wanted to protect his family as it slept under a car.  Overall, seemed pretty easy, except for one thing.  39 degrees with the humidex, very little shade.

You know how kids say “My dad could beat up your dad!”? Well, my mom could dance circles around yours. She’s a fit lady and has a ton of energy, but today caught up to her a bit. 39 humidex and cobblestone streets can do that. Also, she did not eat since breakfast (5 1/2 hours ago) and was exhausted by 1pm.

So we had a little talk about proper nutrition and how starving yourself in this weather and hiking around cities is a good way to kill yourself.   It sunk in, we walked back to the hotel, she relaxed and was later seen eating a Bulgarian cheese pasty. So I think the talk helped. 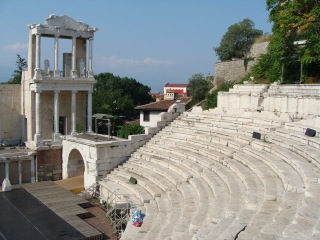 I’ve already mentioned that the one hill was what did mom in.  One of the first things I saw when we got into Plovdiv was this MASSIVE hill with a statue on it and, in my head, I’m thinking “Must Climb”. I’m also thinking “Sweaty”. Somehow, it felt hotter here than it did in Southeast Asia last summer, even though its about 10 degrees lower. Still, I’ve just dropped my mom in an ACed room and wanted to go and do something.

So, the climb up the Hill of the Liberators (a monument to the Soviets for freeing Bulgaria from the Nazis) begins! Not the longest or hardest climb ever, less chalenging than the majority of the hikes I’ve been on, but good nonetheless. SO damn hot, though! I was sweating buckets by the top, sweated through my shirt (not a climbing shirt, to be sure) to the point of near wringability and went through a litre and a half of water. But, got up, saw the statue, took a picture and was done with it.

I was half way to 64 years old, so I better get things like that in while I can.

Day two featured the official tour of the old town and the Roman Amphitheatre.   The amphitheatre is incredibly well preserved and seemed to lack any tourists.  Literally, for the majority of the time, it was just mom, our guide and I wandering around the site.  There’s also a set of old Thracian ruins which provides in views what it lacks in discernible buildings.  The ruins weave their way into the Old Town of Plovdiv, with its distinct wooden houses leaning in to the old Roman city walls.  The colours and designs of the houses are fantastic, and most of them seem to function as hotels, galleries or small shops and restaurants.  The most impressive house is easily the Ethnographic museum, surrounded by a beautiful couryard and filled with Bulgarian costumes, with a heavy focus on village and agricultural life.

With mom going back to the hotel, I figured I’d do one more climb, this time of Clock Tower Hill.  Less sweaty than the day before, but still pretty darn sweaty.

Plovdiv was a nice little gem.  I’d assume it would easily make the tourist itinerary of anybody visiting Bulgaria, but for those who wouldn’t ever consider visiting the country, Plovdiv is as good a reason as any.  It’s not going to blow you away, but it’s interesting to see how the Roman influence gets mixed into all the other influences that make their way into a Bulgarian city.

Next stop is Sofia… again.  Rant on booking through an agent to come next time.