Reasonable wake up hour today.  The sun was actually out and I was able to enjoy my vermicelli noodles in peace.

The plan today was to take a look at a few of the other temples and sites closer to Angkor Wat itself, and then see Angkor Wat at sunset.  You’re in for some horrible rap music and cookie puns, and also some great ruins.

Or, as I obnoxiously called it for most of the day, “Get yo Phreah Khan”.  ‘Cause it kind of sounds like “Freak On” if you say it real fast.

Much like my pun, Phreah Khan is massively wrecked.  It’s not as bad off as Ta Phrom, though it is laid out fairly similarily, and may have served as an ancient Buddhist university.  Some sections are collapsed, others are overrun by trees, but there’s enough that’s still together and, most impressively, a building that looks like a Greek or Roman temple.  I made for a great stroll to start the day.

It was also where we had what could best have been described as a “Walking Dead” experience.  We were some of the first tourists to leave that site that day (or the first who had left it for a while) and, as we went through the exit, a good half dozen or more salespeople rose from the ground and shambled up towards us, again trying to sell us things.  You had to see it to really get it, but the intensity hadn’t let up from day one and nobody knew the capital of Ukraine.

Back in its day, this fountain must have rivaled some of the bigger ones at Versailles or Peterhof, and you can still get a good sense of it today.  The baray it was once in was drained a long time ago, although it will still “pool” near the bottom when it’s rained a bit.  The statue in the middle is of a Bodhisattva transformed into a horse, which is meant to warn people against drowning.  I would file that under “You needed a statue for that?”

The bigger pool is surrounded by four smaller pools, each representing one of the four elements, and the site was used as a sort of hospital back in the day, with the four waters supposedly balancing the soul. 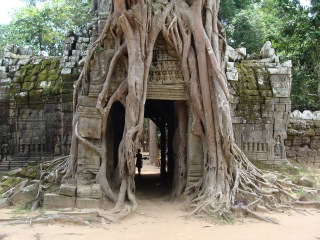 The namesake of our guesthouse, this little temple is basically Ta Prohm, but not as crowded.  The tree at the entrance is every bit as impressive, though.

Lunch stop quickly after.  Guess what I had?

If you guessed amok in a coconut, you’d be wrong….

It was amok in a banana leaf.

For those who didn’t get that, I’m sorry.  For those that did, I’m REALLY SORRY!

This temple was probably used for funerals, with the modern name meaning “turn the body.”  Shiva was it’s main deity, and the triple tower/pyramid structure in the middle makes for a nice view once you get to the top.

My memory escapes a bit, but we think it was here that Daina saw the same girl AGAIN from two days before.  He thinks she recognized him before he recognized her (again, Daina is pretty freaking Caucasian), but once he figured out it was the same girl, his reaction was a priceless “How are you here now?  Who’s driving you around?”  The girl laughed it off, but the sales infrastructure at Angkor is certainly organized, if not chaotic. 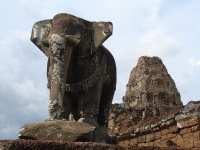 East Mebon
Another temple dedicated to Shiva, this one also sits in the middle of an artificial baray.  Another big tower in the middle, the temple has some amazingly carved elephants on its corners, as well as a neat doorway which provides a “frame” for the main tower.

More notable for its interiors than its exterior, Prasat Kravan is made up of five red towers.  The biggest tower contains some amazingly preserved red sandstone bas reliefs which are held together by an organic vegetable compound.  The temple is dedicated to Vishnu and shows some of the influence of Angkor, as the designs inside were in the style of several ancient Vietnamese structures.  It would be the last temple at Angkor we would see, but it wouldn’t be the last thing we’d be doing that day. 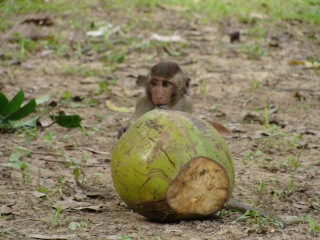 Outside the walls of Angkor Tom, there’s a group of “domesticated” monkeys.  By domesticated, I mean that they’re used to being fed, so you can hand them a banana or a lotus blossom and they’ll eat it right there.  So, being Angkor, of course you have some youngsters selling food for a modest price.  It was one of the cuter moments of the trip, though the monkeys could get a bit aggressive if you held on to the food for too long.

And then, because you can’t get enough of the “big guy”, one more stop at Angkor Wat to see the sun go down!

There were other things we did that night, including checking out a traditional dance show and getting some ridiculously cheap souvenirs, beers and spa treatments in Siem Reap.  I’m just realizing that I forgot to write about the blind guys who gave us massages at Seeing Hands (profits go to support the blind in Siem Reap), or buying a CD of music from landmine victims, or probably half a dozen other things that happened during the trip.

In the face of arguably the most epic religious structure on the planet, some details fall to the wayside.

If you’re ever in Southeast Asia, and you don’t go to Angkor Wat, consider it an opportunity lost.

The place is absolutely amazing. 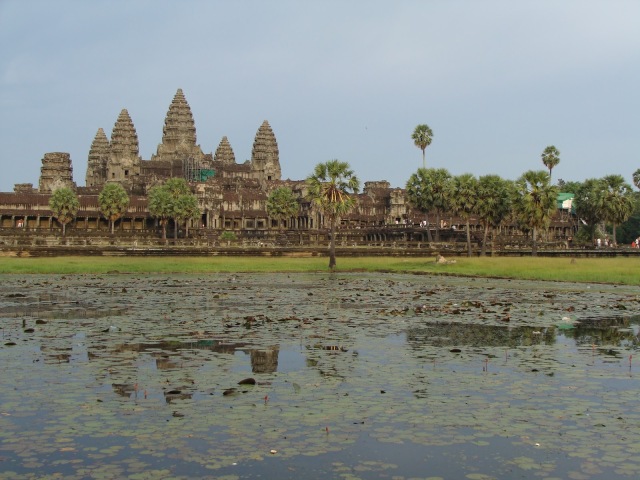