I could probably post a dozen more sunrise shots, since they’re all amazing.  I will show some restraint.

Now, getting up this early, you’d think you’d go back to sleep before seeing more stuff.  Us?  We went to see more stuff.  Today involved a lot of “commuting”, but it was worth it.

A stop on the way to two more impressive sites, Banteay Samre does have a charming layout, with its central tower being “protected’ by what I would assume was a moat back in the day. That, or it was your chance to leap towards the Hindu deity housed in the middle, as Laird decided to do. Or, climb down, climb up, don’t land funny. Should note that this was one of the temples where were actually alone for the whole time we were there. No other tourists in sight, going in or going out.  There are plenty of times within Angkor Wat where you can get the feeling of being alone, but this was the first point where we actually were alone.  Pretty amazing.
Banteay Srei
This is where the crowds came back. As well as the Cambodian Sales Brigade. 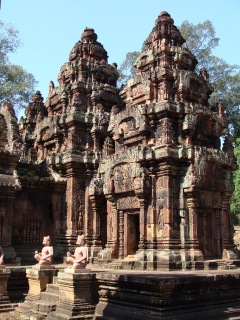 At this point, we had heard Ben’s “Where are you from? Canada, population….” spiel from pretty much every kid at every temple we had been to, so we started making stuff up. Kind of offended nobody knew the capital of the Ukraine, because I would have bought something.

It made sense for them to come out this far, though, since Banteay Srei is arguably the prettiest of all the temples at Angkor. It’s small, but the carvings are amazingly elaborate, the sandstone gives it a different look from the other temples, and it has a nice little moat. It’s out of the way, doesn’t take too much time to look around, but is completely worth it for the artwork.

You’re also going to run in to dozens of small, sandstone statues. The name actually means “Citadel of the Women”, mostly due to the fact that people didn’t believe men could carve things so intricate. As a man, totally not offended by that. For real.

Oh, and the Sales Brigade? Daina thought he recognized one of them from the day before. We brushed it off as a case of mistaken identity.  Bookmark that for later.

Kbal Spean is known as the River of the Thousand Lingas.  Depending on who you believe, lingas are either a representation of male creative energy, the penis, or a symbol of divine energy.  I’m going to go with penis, just because.

It takes about half an hour to hike up to the actual carvings and, even though you’ve got more shade to work with on account of being in the jungle, you’ve also got more humidity, for the same reason.

As you reach the end of the trail, there’s a cute little waterfall that invites you in, though all the signs around it point to the fact that it’s really not allowed. So don’t.

Lunch from the restaurant nearby resulted in even more delicious amok.  I don’t think there’s a bad place to eat around here.
Back into the tuk-tuk for some natural air conditioning and the long drive to the Rolous Group of ruins, which predate Angkor by about 400 years and show how classical Khmer architecture began.
Lolei

At one point in time, Lolei was an island temple, one of the many temples made to represent the Hindu Mount Meru.  Some of the floating lily ponds give you a bit of an idea of what the original site may have looked like.

The four brick towers contain a lot of decorative carvings and the site is right next to a fully functioning Buddhist monastery.  We just happened to see an elderly monk laying out wet rice onto a large tarp to dry it out.  Real life continues as the tuk-tuks drive on through. 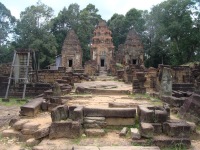 Preah Ko
Six towers based on a time that pre-dates the rest of the Rolous group.  In a lot of ways, it looks like Angkor Wat Beta.

There are some neat statues left over and, while it was probably the site that blew me away the least, saying that is kind of like picking the worst player on an all-star team.

The biggest and most important of the pre-Angkor sites, Bakong was the first temple mountain that was built in the area and served as the official state temple in the 9th century.

The temple mountain is in the middle of two moats and is pretty well intact.  It made for an impressive stop for the end of our day.

Showers and some rest in Siem Reap before heading out for dinner.  We went to a place called Cambodian BBQ, which specializes in, get this, Cambodian BBQ, which involves cooking things like beef and chicken at your table, as well as cooking more exotic meats like snake and alligator.  Then, off to a bar where we drank from a magical, self cooling, wizard’s orb of beer.  Best description I could come up with.

After having seen so much over the past two days, it’s hard to believe there’s a third on the way. 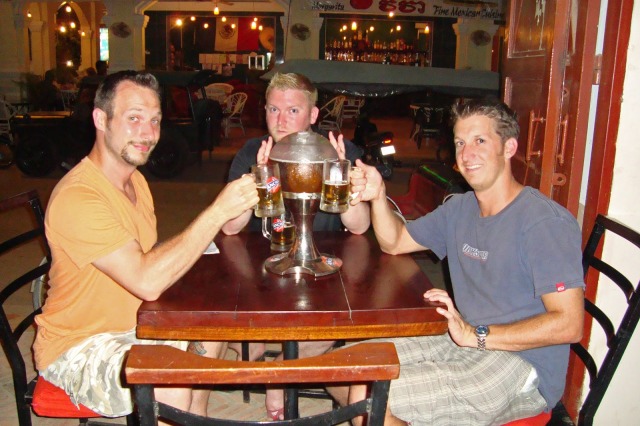