So this one post was supposed to cover all three days we spent at Angkor, but I’ve decided to split it into three separate posts, just to give myself a bit of a break from typing.  If you are planning on going to see Angkor Wat and the awesome that surrounds it, you need to give yourself at least that much time.  I’m one of the first people to lambaste somebody when they pull out the “you need more time” card, but really, you need those three days.

I’m also going to gloss over Siem Reap proper.  Nothing against the town, it’s fine for what it is.  What it is, though, is the gateway to the ruins.  Lots of development, mostly from foreign investment, good cheap eats, some cultural displays, some shady displays.  If it weren’t for Angkor Wat, the town wouldn’t be on anybody’s radar.  As a place you have to be, though, it’s alright.

It’ll come up a few times in the post, so be ready for a break in the awesome.

Our flight from Vietnam was delayed by a bit, as I think Vietnam Airlines combined our less booked flight with a later, also partially booked flight.  It only set us back about an hour or so.  We landed just as the sun was setting, and I managed to look back and snap one of the more impressive airport shots I’ve ever taken.

Because, really, that airstrip is the Siem Reap airport.  There’s a terminal and everything else, but we weren’t looking at Pearson or LAX or anything here.

Nobody is every going to accuse Cambodia of not embracing tourism (more on that later).  D and I actually got our visas for the country through their online E-Visa service, which allowed me to print out and and staple my visa to my passport, which got me through customs super fast.  Laird had to do it the old fashioned way (2 pictures and a form), but we were still out of the airport, bags ready to go.

We were a bit worried about getting to our guesthouse, since our plane was delayed, but as we stepped out of the departures area, there was my name!  First time that every happened to me!  I am the 1%.

We were staying at the Ta Som guesthouse (named after one of the temples we’d be visiting later), which was just what we needed for our stay – big beds, air con, across the street from a convenience store, and a straight walk to the downtown.  We set up a three-day tour of the temples that night (with the same guy who drove us back from the airport, no less!) before heading into the town.

We didn’t get too deep into Siem Reap proper that night, though it was the time that we met Ben, who I covered in one of the previous Bitstrips posts.  I’ll talk a bit more about the touts and the child labour sales force later.  After some awesome food for cheap, we made a stop at the convenience store for some basics and headed back to the guesthouse for a crash.  Next morning, breakfast of noodles and we were off in our tuk-tuk.

Now, there are a ton of options for getting around Angkor Wat.  I would steer anybody towards the tuk-tuk for one simple reason.

You’re going to want to get out of the vehicle and walk around, and chances are you’ll want to walk around a lot.  I saw people hiring cars, which may have been more comfortable, what with the air conditioning and all, but what happens when you leave the car?  The air con goes off.  Then, you’re a sweaty mess until you get back into the car and wait for the air con to go back on.

If the car sits there and idles, environmental damage.  So, no car.

In the tuk-tuk, you get in and are blasted by air while you’re driving.  Blows the sweat away.

Since we went to so many temples, I’m going to try to give each one its own subsection, along with my recollections and anything notable that happened.

So this is the big guy, centre of the largest religious complex ever built in the world.

Think about that for a second.  Bigger that Mecca, which attracts millions a year at one time.  Bigger than any church ever constructed by anybody, including those new “mega-churches” that are the size of a stadium.

Biggest in the world.

You approach Angkor by crossing a giant stone bridge that crosses a moat after walking past two seven-headed snakes, known as Naga.  The places is walls into courtyards into walls into more courtyards into cloisters into stone carvings into prayer rooms…  You could get lost real fast, but that’s not actually a bad thing.  You kind of want to get lost in here and, even though it’s heavily touristed, you can actually feel alone at times, just by turning a corner at the right time, or waiting for a crowd to pass.  Granted, we went during the second high-season, but I never felt overwhelmed by tourists.

Did feel a bit overwhelmed by people selling me things, but when you consider how poor the country is, and how awesome the sights are, you get over it.  We contributed to the “local economy” pretty quickly, picking up some tank tops and a Vietnamese style hat for Daina (so he wouldn’t get sunstroke…in Cambodia, at least).

We knew there’d be more visits to this particular temple, but we took our time and walked the whole thing, trying to hit every single corner.  We saw the 800 m stone relief carving of a variety of Hindu scenes, including the famous “Churning of the Ocean of Milk”, which involves various mythical beasts attempting to extract the elixir of immortality.  Makes sense.

The temples inside were just amazingly carved.  For a structure that’s just under a thousand years old, it still holds up fantastically well.

Like I said, we’ll be coming back to see this place a couple of different times during the post.  So let’s go to the next big thing.

Rather than just being a temple, Angkor Thom is actually a fortified city with a series of impressive temples within it.  You enter by driving through one of its five massive gates, each topped with four Buddha faces staring out at you.

Basically, as impressive as Angkor Wat is, this place tries to raise the bar on you pretty darn quickly.

This particular building was built by a king who, rumour has it, ordered the temple built in the dead centre of the city with 216 Buddha faces that were supposed to look like him.  Don’t know if that’s ego, paranoia, or a combination of the two, but it makes for an amazing place.  I don’t think I’ve ever taken more picture of faces anywhere, but every single direction you turn gives you another amazing shot.

Close by is Baphuon, which represents both how stupid modern man is and how guilt can lead you into some crazy tasks.  Before the Cambodian civil war, a team of French archaeologists took apart the entire temple.  Now, granted, they kept records of how to put it back together, but it seems like a bit of an exercise in dickery to rip the thing apart, even if your intent is to put it back together.  Once the civil war happened, the plans on how to rebuild the place were destroyed by the Khmer rouge, leaving a giant pile of rocks.  Fortunately, it’s being rebuilt as we speak, but it is a slow process to say the least.  It will be interesting to see what it looks like when (if) it ever gets finished, but you can still make out details like the face of the reclining Buddha.

You’ve also got the nearby Terrace of the Elephants (filled with many decorative elephants) and the Terrace of the Lepper King, which was used as a crematorium in the day. 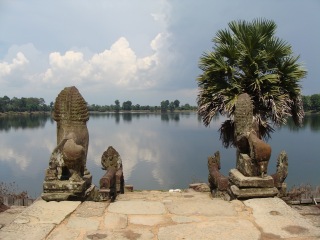 Srah Srang
A “baray”, or artificial lake, just off of the ruins, it’s worth the stop for the one view.  Basically, the steps in front of these lions lead in to the giant, artificial lake.  Makes for a nice view.

Along the side of the baray, you’ll also find a few restaurants and shops.  We stopped at one of them for lunch, which was delicious, a trend we’d discover would consistently continue in Cambodia.  Plus, you can’t beat food served in a coconut.  Coconut makes anything tastier.

Then, back to the ruins!

It’s open season for climbing on a lot of the ruins in Angkor, and Ta Keo is one of them.  The pyramid is over 50 metres tall but was never finished.  It’s not quite a direct slog to get up to the top, and Laird and I decided to go the climb alone while Daina stayed in the shade with our driver.

Hence, the confusion on the little guys’ face.  He still got some Riel out of the deal, so it was worth it for everybody.

Ta Prohm
If you rightly consider Angkor Wat proper as Cambodia’s most memorable sight, you could make a strong case for Ta Prohm being number two.

Pretty much all the other Temples of Angkor have, at some point in time, been completely overrun by the jungle that surrounds them.  Ta Prohm has basically been left along, leaving it looking like it’s being “reclaimed” by the jungle.  As you wander through the various corridors, you’ll notice that a lot of them are crumbling, with giant tree roots having completely won out against the stone in several places.  There’s a de facto “Photo Spot” in front of one of the biggest roots, but you’re getting incredible view from pretty much any angle, no matter where you go.

The temple is one of the biggest at the site and makes for a pretty amazing stroll. Take your time, watch your step, hug a tree root.

Every famous ruin has its “famous” place to take pictures from, and Phnom Bakheng is it.  The problem, though, is that being famous has left it crowded as all heck at sundown.  As we were climbing up to the top, an angry, old British man trumbled down the steep steps, complaining “It’s not worth it.”

See, here’s the thing.  In this age of global tourism, you kind of have to accept that certain places are going to be a zoo.  This is one of them.  However, in spite of the crowds of people, the view of Angkor Wat is stunning.

Now, I’m not knocking traveling while you’re old.  I know that we’re in a lucky DINK (dual income, no kids) situation that allows us to travel now, when a crowd around a steep Cambodian temple isn’t something to gripe.  However, if you’re going to leave your corner of the world and grouch about crowds at one of the most famous sites in the world, you’re kind of losing the plot.

Once the sun started to go down, it REALLY went down fast.  We were back in the tuk tuk as it started to get dark and found ourselves back at Ta Som in short order.

No night out this evening, as we were getting up at early the next day for Angkor Wat at sunrise.  We filled up Daina’s Vietnamese hat with some convenience store goodies for a ridiculously small price, played some cards, and turned in early.

We didn’t want that view hung over.