So, time to hit the beach towns is more like it.  While most other people on March Break end up coming back with some kind of suntan, I’m coming back with stories of a fantastic place filled with fantastic sights and people.  So me not being able to get my pasty white self to a beach isn’t a big deal.

The title of the post might look daunting and, to be fair, a little bit stupid after the mess that was yesterday, but fortunately, this is a pretty easy run in terms of getting around independently.  Sousse and Monastir are only half an hour away from each other, and Port El-Kantaoui is one of those “if there’s time” sights within Sousse, and getting back to Tunis from Sousse is not a challenge, as it’s a pretty well serviced route.

Monastir was the first stop of the day and was the furthest of today’s rides – another three hours in a louage, thank you very much.  Monastir is a bit of an oddity, as it has a beach but, instead of being lined by palm trees, it has the massive ribat as a backdrop.  The ribat has actually been used as Jerusalem in a variety of films, including Life of Brian, and is considered the best example of Islamic military architecture in all of Tunisia.  Stepping inside, it’s hard to find a rhyme or reason for the design.  Stairs appear and go to random floors, which are entirely unconnected to other floors, so getting around the structure can involve a bit of backtracking if you’re not paying attention.  You do get some great coastal views from the top level, and some really nice views of the Mausoleum of Habib Bourguiba.

Bourguiba is considered the founder of modern Tunisia.  He is the man most responsible for helping to Westernize the country, improving its economy, liberating women by doing things such as eliminating polygamy, changing the legal age of marriage to seventeen and allowing women to refuse a marriage they did not like.  As Assma mentioned to me on the train, this doesn’t always translate into the day to day, but the end result is an Islamic society where women are relatively equal.

However, the other thing I need to mention is that Bourguiba also put a lot of restrictions on Islam, believing that the religion was what was holding the country back.  He worked to ban Islamic parties from politics, confiscated lands owned by mosques and religious institutions and imprisoned people who didn’t agree with his view of Tunisia.  The guy was given “President for Life” status and, even though he was eventually overthrown by Ben Ali, Ben Ali continued pretty much all of Bourguiba’s policies.

Having only been there for little over a week, I can’t claim to know how the Tunisian people operate.  It is obvious, though, that the relative lack of freedom given by Bourguiba and Ben Ali actually did help create a modern, dynamic, relatively functional Arab state that didn’t find its development hamstrung by religion.  That being said, unemployment was still high, there was no real freedom of speech and all of the trademarks of any dictatorship – surveillance, imprisonment, controlled press – were still in place while I was there.  One of the most apt lines about politics actually comes from The Dark Knight, where Harvey Dent says “You either die a hero, or you live long enough to see yourself become a villain.”  Bourguiba was taken out via coup and got a massive mausoleum.  Ben Ali is living in exile in Saudi Arabia.  Tunisia wouldn’t be the country it is right now without the efforts of two political strongmen, and I’m interested in seeing how the positives aspects of Tunisian society that I saw reconcile with the Arab spring.

Anyway, on to the actual Mausoleum, which was really quite beautiful.  Giant bronze doors, marble courtyards, gold and green cupolas and a second floor that gives you a fantastic view of the whole interior, including the sarcophagus.  Today, the view was  partially blocked by a crane, as it was obvious there’s some remodeling happening inside, but it was still a great little walkabout. 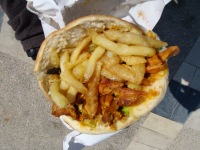 One dinar!  And all your major food groups.  Bread, meat, french fries, sauce, token vegetables at the bottom.  We need more of this kind of shwarma in Toronto.  Especially with the french fries.

So, yeah, Sousse.  Nice and easy, half an hour away by louage, Sousse is Tunisia’s beach destination, filled with hotels and resorts and a gorgeous looking beach that would have made for a great swim if it wasn’t ten degrees with a windchill of no-thank-you.  The city was founded in the 9th century and with history all the way back to the Punic wars, Sousse has served as a military centre (it was Pompey’s home for a spell during the Roman Civil War, while Caesar set up in Monastir) and a major port for when Kairouan was running the show in Tunisia.  The medina features some tremendous walls and gates, a Great Mosque without a minaret, a fantastic looking kasbah at one end of the city and another ribat, not quite as dynamic as the one in Monastir, but pretty neat to look at nonetheless.  I did make my way down to Boujaffar Beach, hoping the sun would stay strong and the wind would let up, but the exact opposite happened and I found myself back in the medina, aimlessly wandering the streets.

Tunis’ medina is bigger and more impressive, but I didn’t mind getting “lost” as much in Sousse’s medina.  It was much less overwhelming and more charming.  But when you go from a city of two and a half million to one of just under two hundred thousand, that’s to be expected.

Now, apart from a desert rose and a small statue that I bought (for what I later found out was an incredibly inflated price) in Tunis, I was low on souvenirs.  I had read about this place called Port El-Kantaoui, which is basically a purpose-built tourist village with pirate ships, amusement park rides, duty-free shopping and a yachting harbour.  If you don’t want to spring for a taxi, the best way to get there is by a little toy “noddy” train or even by tuk tuk.  It’s a lot of kitsch, but it also seemed like an easy place to get some good souvenirs without having to worry about haggling. 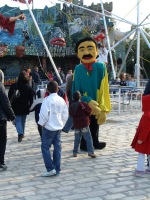 I hopped the little train, which chugged along the highway until I reached the amusement park complex which signals the start of the port.  I was greeted by this guy and a few other giants like him.  The port held no surprises and was exactly what was advertised – pirate ships, glass bottom boats, duty free, yachts, hotels – but I was okay with that.  The trip was winding down and so was I and, at the end of the day, I just wanted to keep it simple and make my way on home.

After picking up souvenirs for the family, I went back to the toy train stop only to find out that I had just missed one and the next one wouldn’t be leaving for another hour – off-season schedule, I suppose – so I found a taxi and made it back to the Sousse louage station.  Two and a half hours later, I was back in Tunis, having another meal in Ville Nouvelle before coming back to the Grand Hotel de France for one last evening’s sleep.

I’m going to cheat a little bit on this post and do my wrap up as well, since I ended up flying out of Tunis the next day in the middle of the afternoon.  This entire trip was amazing.  Even the difficult parts.  Aside from the sketchy cab driver at the start of the vacation and the male not-prostitutes in Gabes, the people of Tunisia seem genuinely glad to see you there and are among the kindest I’ve met.  Yeah, you’re going to get an inflated price when you’re in the medina, but you’re also going to get somebody buying you dinner just to show you hospitality.  You’re going to be invited to a wedding weeks away by somebody you’ve only been talking to on a train for an hour.  It’s that kind of country, with those kind of people.

In terms of the actual things to see, you can’t really fit more in to such a tiny place.  I didn’t even hit the desert sightseeing or see the salt flats at Chott el Jerid (I can never seem to get to the salt flats), but I did see Star Wars sights, the desert, troglodyte villages, Islamic sites, Roman cities, Carthage, the ocean.  Where else can you see all of that in one place?

If you get the chance, please go.  You will not be disappointed.