Okay, work got in the way.  That’s pretty much the long and the short of it.

When I’m just travelling around on my own, I can find time to write.  It’s a downtime activity.  However, when you’re both working and traveling, there’s not a lot of downtime.  Add to that the fact that I actually had, you know, a job (though not a hard job) and blogging took a back seat.

Fact is, this time around, we had to do report cards every two weeks, write a final test and put just a bit more work into the day to day activities.  Plus, I had 24 kids in two classes as opposed to eight.

I still want to have some kind of written record/recollection of this part of the trip, so what I figured I’d do is add a picture of each notable place, then say something, then move on.  It’ll let me fast forward to the rest of Jeju (where I am now) and the DMZ (where I’ll be Friday).

King Jeongjo built the walls surrounding the city of Suwon to honour and house the remains of his father, who had been murdered by being locked alive inside a rice chest by his own father.  Pretty specific tribute.  What makes it amazing, though, is that the wall is over 5 kilometers in length and pretty massive at almost all times.  It’s dotted with some beautiful gates, including one that serves as a flood gate which I got a pretty good picture off, though I was (and still am) fairly pissed because, as we were leaving Suwon, I saw a much BETTER picture I could have taken from the other side.  Yeah, I know, Tourist Problem.

The town also has an old royal palace which is pretty impressive.  You can pay 3000 won to ring a giant bell three times and walk the walk in less than a day.  Hot, hot, HOT when we were there, but totally worth it for a day outing.  Wanted to get a chance to try some Suwon Galbi (a specially grilled beef rib) but we didn’t have chance because we wanted to get back for a club night that never happened.  What DID happen was some WiiBang that went way too late, especially considering what we had planned for the next day.

Yup, why see one Fortress when you can see two?

The heat was the same, the scale was smaller and the “wow” factor wasn’t as impressive as when we did Ingwansan a while back.  You had to bring your passport to get due to the North Korea army hiding spies there a few years back in an attempt to decapitate the president.  And wear a nametag.  There was a pretty massive gate, which was interesting, and a whole lot of different views of Seoul, and I would recommend doing it, but I’d say do it BEFORE you do any of the other mountain hikes in Seoul.  It’s good, but it doesn’t feel all that different. 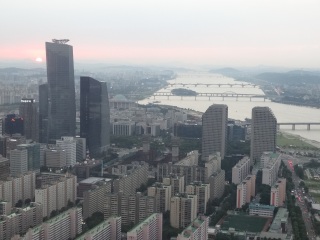 Unless you really like crappy aquariums, a wax museum where Marilyn Monroe looks like she was “touched” and Michael Jackson looks kind of Italian, or you REALLY need a view of Seoul WITH the Seoul Tower in it, you can give this one a miss.  It was the tallest building in South Korea for the while but wouldn’t even crack the top 100 in North America.  For what you pay to see the stuff inside, not really worth it.

Hooked up with Robyn to do this one in combination with the Banpo Bridge (more on that in a few).  If museums are your thing, you NEED to see this one – great representation of the history of South Korea from prehistory to the start of the 20th century (anything dealing with the Korean War is handled by the Korean War Memorial, which I had been to a few years back.

It’s not just the Korean displays that are awesome, however.  They have a whole wing for Asia with artifacts from Afghanistan to Japan.  A lot of Korea’s National Treasures (which they number) are housed in the museum and there’s a Buddhist sculpture wing which not only shows the sculptures but gives you an idea of why they are made the way they are.  The bottom floor has English explanations, but it gets a bit dicier up top.  Best part?  Free!  Really no reason not to go if you have time.  It’s also “close” to the next place we went to, although you might want to look in to that. 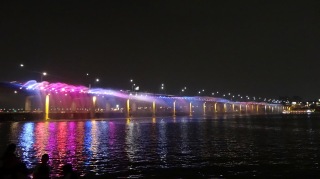 Okay, from all accounts, this should have been easy to find.  Even the Korean Tourism Board has “Go to Dongjak station, get out at exit 1 or 2.”  Well, the bridge at exit 1 or 2 is decidedly unrainbowy.  The Banpo is actually a good 30 minutes walk.  The only reason I was only able to find out which way to walk was because I looked at a water taxi route and saw 63 City in the other direction from Banpo, so I guess 63 was useful after all.

If we had managed to get there on a more direct route (and there is a bus that lets you off at the viewing area), then I would definitely say don’t miss it.  The bridge is covered with LED lights that shoot “coloured” water that is pumped from the river back into the river to various songs (including some shlock like Mariah Carey’s “Hero”).  It’s a pretty beautiful site but just make sure you have a way to get there with relative ease.  Or, walk 30 minutes from Dongjak.

This was a reunion with my buddy Mike from the Vision.  Gyeongju was the capital of the old Silla Kingdom which was the first kingdom to officially unite Korea into a makeshift political alliance.  The place is packed with sights and we were lucky enough to have Mike’s friend Sujin drive us around for the day, allowing us to get all the big ones in.

There’s the Bulguk Temple, one of the most famous and beautiful in Korea.  The Seokguram Grotto, which was a pretty amazingly carved Buddha inside, though for the distance and the fact that you have to look at it from behind a glass wall amongst the crowds, it’s not as fantastic as I thought it would be.  There are old temples and monuments and tombs and Asia’s oldest known observatory scattered through fields of orange flowers and lotus.  Then there’s the Anap Pond, which lights up at night and is pretty much the perfect “Feng Shui” pavilions on the water example.  Pure magic all around.  See it and give yourself enough time to see it all if you don’t have wheels.

Since we got done Gyeongju quicker than we thought thanks to Sujin’s help, we were able to go back to Daegu and see Donghwasa Temple and Gatbawi.  Donghwasa Temple is older than its most impressive feature, a massive standing Buddha, but it is beautiful nonetheless and actually has a bit display on meditation in an underground passage beneath the Buddha.  Gatbawi is a sitting Buddha at the top of a mountain who is actually carved into the rock.  Not nearly as big, but just as impressive.  Couple of great side trips which made Daegu more than “that place where Mike and me got really drunk before going to Gyeongju”. 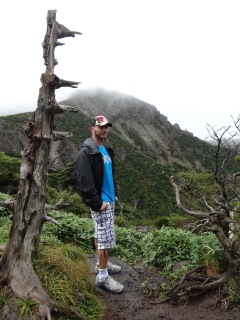 We’re officially offshore now and on Jeju Island, recently voted one of the Seven Wonders of the Natural World.  Hallasan is the highest peak in South Korea and it’s an 18km trek to the summit.  However, it’s an old volcano, which means that the trek is long, but gradual.  It takes a toll on you physically from more of a repeated motion standpoint than a difficulty standpoint.

Actually met up with this guy named Justin from California, who is the CEO of his own Preventative Medicine company.  Neat guy, just happened to bump in to him at Gimpo Station when we were both looking for the exit, and it made the day go by a bit faster to have somebody you could pace yourself with.  That being said, Justin is about 4 inches shorter and probably at least 40 lbs lighter, so he had the much faster pace.

Not that it matters, because Hallasan is beautiful and should be enjoyed.  There’s a lake in the crater at the top, impressive rock formations on the path down, loads of butterflies and lots of different trees.  It’s a great walk that will leave you exhausted but also leave you feeling like you’ve seen something.

So that brings us to… right now!

Tomorrow, I’m planning on seeing the three waterfalls of Jeju, all of which appear pretty beautiful and some of which you can actually swim in (!).  Hoping the weather holds up.  Jeju is odd, though, because it’s a beach destination with a ton of little kitch museums.

So tomorrow, I’ll either be talking about the waterfalls or the Teddy Bear or Sex Museum.

At least it’s not a Teddy Bear Sex Museum.