I was literally expecting nothing to come out of this day.

And by nothing, I do mean nothing by my travel standards, which means one or two small things.  Fact is, we’ve done all the “big things” we wanted to do in Copan Ruinas, minus a butterfly sanctuary and a museum, both of which are closed for repair.  So today was a chance to climb to the prerequisite mirador, get a shot of the city, go to the bank and buy some small souvenirs. 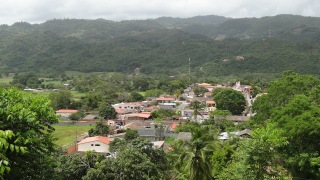 We take our sweet time getting up this morning and make our way up to what used to be a fort or a prison, depending on what you read, and is now a children’s museum with some towers you can climb for views of the city.  Small hike uphill, nothing too crazy.  Take some pictures, go down a sidestreet to where there is an “official” mirador, which ended up being a small outcrop next to a house that looks like it’s seen some better days.  We turn back as I decide it’s time to head to the bank. 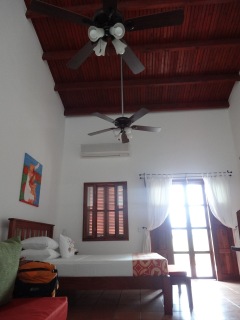 On the way there we run into the proprietors of La Casa de Cafe, Howard and his wife, who are moving things into their new property, Terramaya.  Howard politely invites us in for a tour and the place is absolutely beautiful.  Giant vaulted ceilings, massive bathrooms (one with a jacuzzi!), a beautiful back garden and balconies with views over the valley.  Casa was amazing, but this one trumped even that!  Daina was especially impressed with the whole thing, letting out several audible “wows” throughout the tour.

We thank Howard and get on our way to the central square, as I have to hit an ATM and get some Lempiras so I can pay for the place we’re staying at now.  Two bank machines later, no luck.  There was a third one in town and I had my Mastercard on me but, figuring that there was some kind of problem with my card, since TD did something like this last year only a few days into our Peru trip and not wanting to pay cash advance interest if I could avoid it, I decided we should go back to the Casa and call TD collect to figure this out.

We get back and Howard returns shortly thereafter, helping us place the call.  After going through muzak limbo for a few minutes, Howard asks “Are you guys going to stick around for a few minutes after this?” and we say “probably.”

Side note: TD has the WORST on-hold music EVER(!), and it never changes!

I finally talk to a customer service representative who tells me there’s nothing wrong with my card so it must be the machines.  Armed with that (hopefully) useful information, I tell Daina the good news and we decide to head back into town.

Howard’s wife stops us.  She says “Maybe you can wait a minute, Howard wanted to talk to you.” 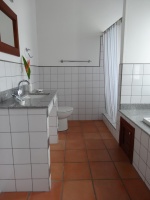 Now, all I can think is that Howard was worried about us not being able to pay so he wanted to know how the call turned out.  We wait a couple of minutes and he comes back, asks how the call went and pauses.  Then he asks us “Since you guys liked the other place so much, would you like to try it out for a night?”

There was a moment where Daina and I both looked at each other and couldn’t quite believe it.  No real hesitation on the answer, besides a “For real?”, it was yes through-and-through!

So we pack as quick as we can, toss our stuff in Howard’s truck and drive our way to Terramaya.  Howard offers us THE HONEYMOON SUITE!!!  Un-fricking-believable!!!  He then motions to the couch and lets us know not to worry, because they have turndown service and that will become a bed (thanks Howard!)  Having laid on that “couch”, it is more than a perfectly acceptable bed!!!

So anyway, we are officially residents of Terramaya, all the awesome service of Casa but twice the room and ambiance!  Amazing! 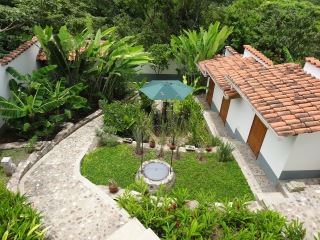 The rest of the day was pretty by the numbers.  I tried the third cash machine in town, which happened to work with my card – FYI, all ATMs in Copan Ruinas are guarded by police officers with very large guns – and took out the money we’d need for dinner, etc.  Grabbed lunch at Via Via Cafe and made sure the tour agency there knew where we were staying so we’d get picked up tomorrow on our way to Guatemala.  We tried to go to a photo exhibit on the discovery of Copan – it was closed and I ended up going back later – and then we headed back to Terramaya for some rest.  I managed to pick up some souvenirs for the kids who finish my summer reading challenge, finally saw the exhibit, came back to Terramaya where the power had come back on (the town was in some kind of blackout for a few hours, only buildings like banks with generators seemed to work) and now here we are!

So Tripadvisor is getting some pretty awesome reviews on Casa del Cafe, this place and Twisted Tanya’s, where we had a crazy good dinner last night.  Viva the Internet and the age of instant feedback and, if anybody deserves a positive review, it’s Howard and his crew.  Amazing!

Tomorrow, we hope a shuttle to the Guatemalan border at 6:00 am to Rio Hondo, where we hop a bus to Flores, which is our gateway to what is considered the mother of all Mayan ruins, Tikal!  Should be a fun day for transit, hopefully with some interesting stories to tell that don’t involve bus breakdowns.